Since our first year full time RVing we have made it an unofficial goal to see as many national parks as we can. At first it was less of a goal and more of an aspect of our route planning, i.e., defaulting to include any unvisited national parks on our itinerary as we passed through various states and regions. Not all of them have been home runs; I can think of two off the top of my head that did not seem to deserve the exalted status of being a national park, and I’m not even counting the truly weird Hot Springs in Arkansas. But far more of them either lived up to the hype or knocked our socks off off despite having barely heard of it before visiting. 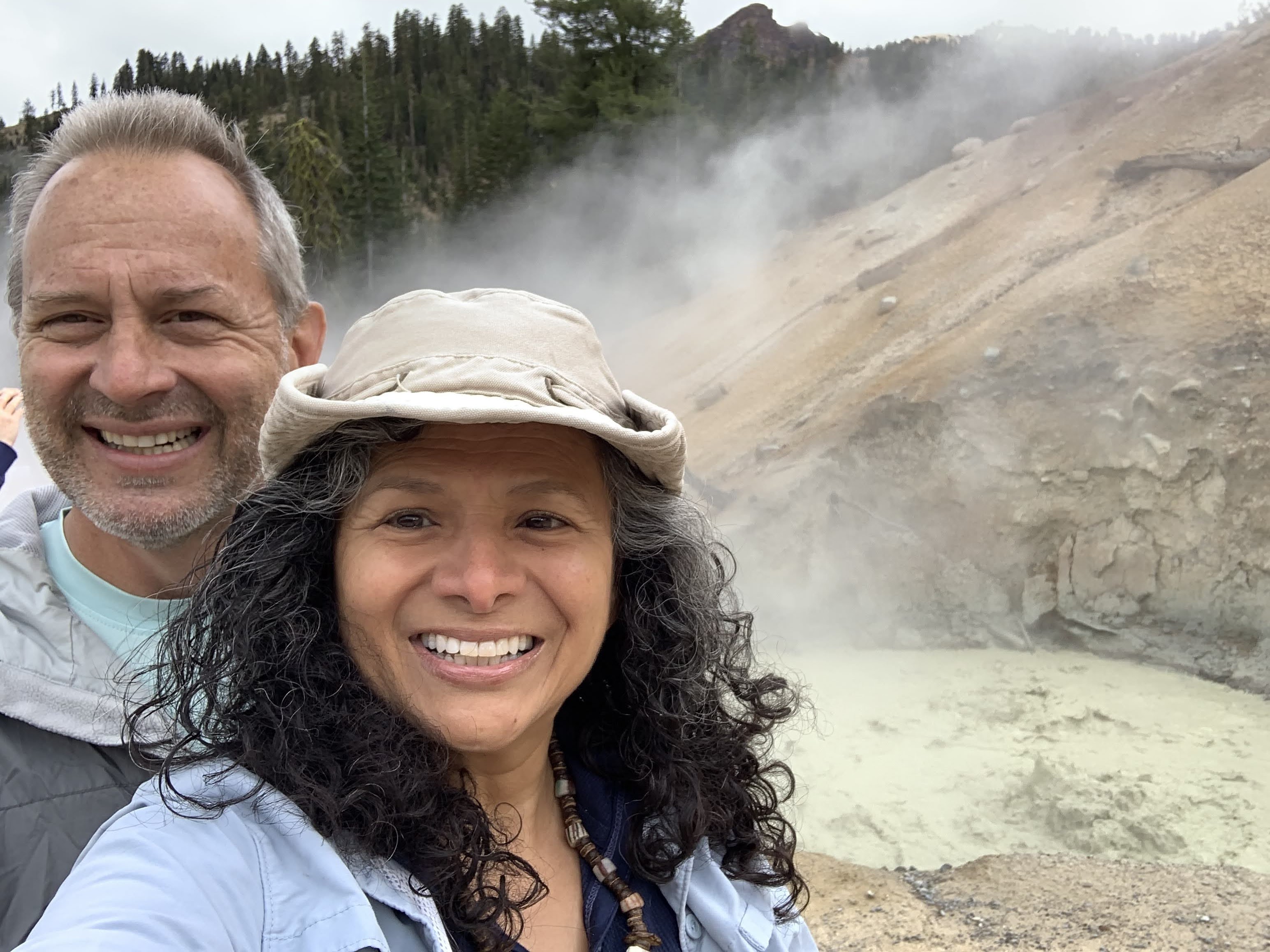 Can you smell what we are cooking? Sulpherous Mudpots!

We have been so rewarded by this process that it continues strong here in our seventh year on the road, having already hit Sequoia National Park last month, with several more lined up for June starting with Lassen Volcanic, located deep inland in Northern California, about 150 miles north of Sacramento. We made the nearly four hour run from Travis AFB to our chosen campground in the park area, Living Springs RV and Cabin Resort.

The campgrounds within the park itself were either for smaller rigs or full up, and the options on the private market were limited and pricey. We paid $68 a night, and that’s with a 10% veterans discount, which is a much higher rate than our usual and surprising given my impression that Lassen is not exactly one of the big destination national parks. Aside from the sticker shock, the place was quite nice. The sites in our section were oddly laid out, but we had a full hook up, pull through site under a nice tree canopy in a well maintained campground that even had an on premises geocache. The place had a “living in nature but not roughing it” ambience.

The northern park entrance was conveniently located about 15 miles up the road from Living Springs. During pre-pandemic times we had a bit of a routine for new national parks that included an early stop at the information center for brochures and maps and to see the park movie, a staple at nearly every one we have visited. With COVID restrictions the visitor centers are limiting indoor numbers, and all their theaters are closed. This was fine for Lassen since the main info center was at the opposite end of the park, so we just grabbed the park map at the gate and followed along the numbered and clearly described points of interest on the park road. 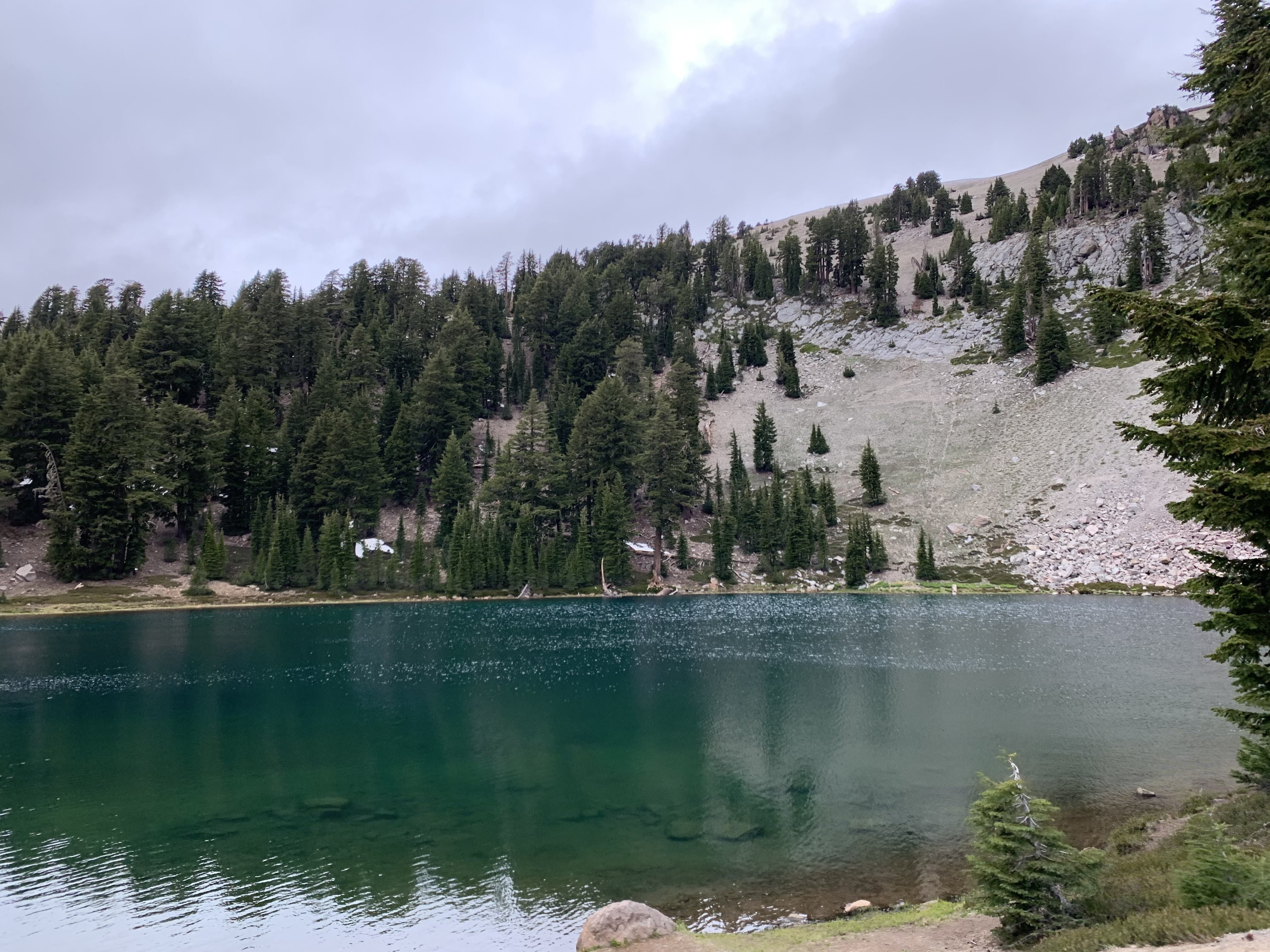 Neither of us knew much of anything about the place before going, and so it exceeded our practically nonexistent expectations. Lassen is a beautiful park and we had a lovely day touring it using one of the better constructed park guide maps and roadside information markers that we have seen. Each stop gave you a piece of the geologic history and its impact on the flora, fauna, and sparse local population. The short version is that Lassen Peak, after decades of observed sporadic activity, exploded big time in 1915, causing a massive lava/mud slide and ejecting large rocks that ended up miles from the peak.

One of the big rocks ejected from Lassen Peak during the 1915 explosion.

The area remains volcanically active; many mud pots and fumaroles are quite visible, particular near the old Sulphur works. We appreciated the variation within the park, the harshly beautiful blasted areas still recovering from volcanic devastation, the idyllic meadow streams, clear mountain lakes, and snow on the western slopes. Upon reaching the southern entrance we stopped at the gift shop for coffee and a park patch to add to my growing collection. 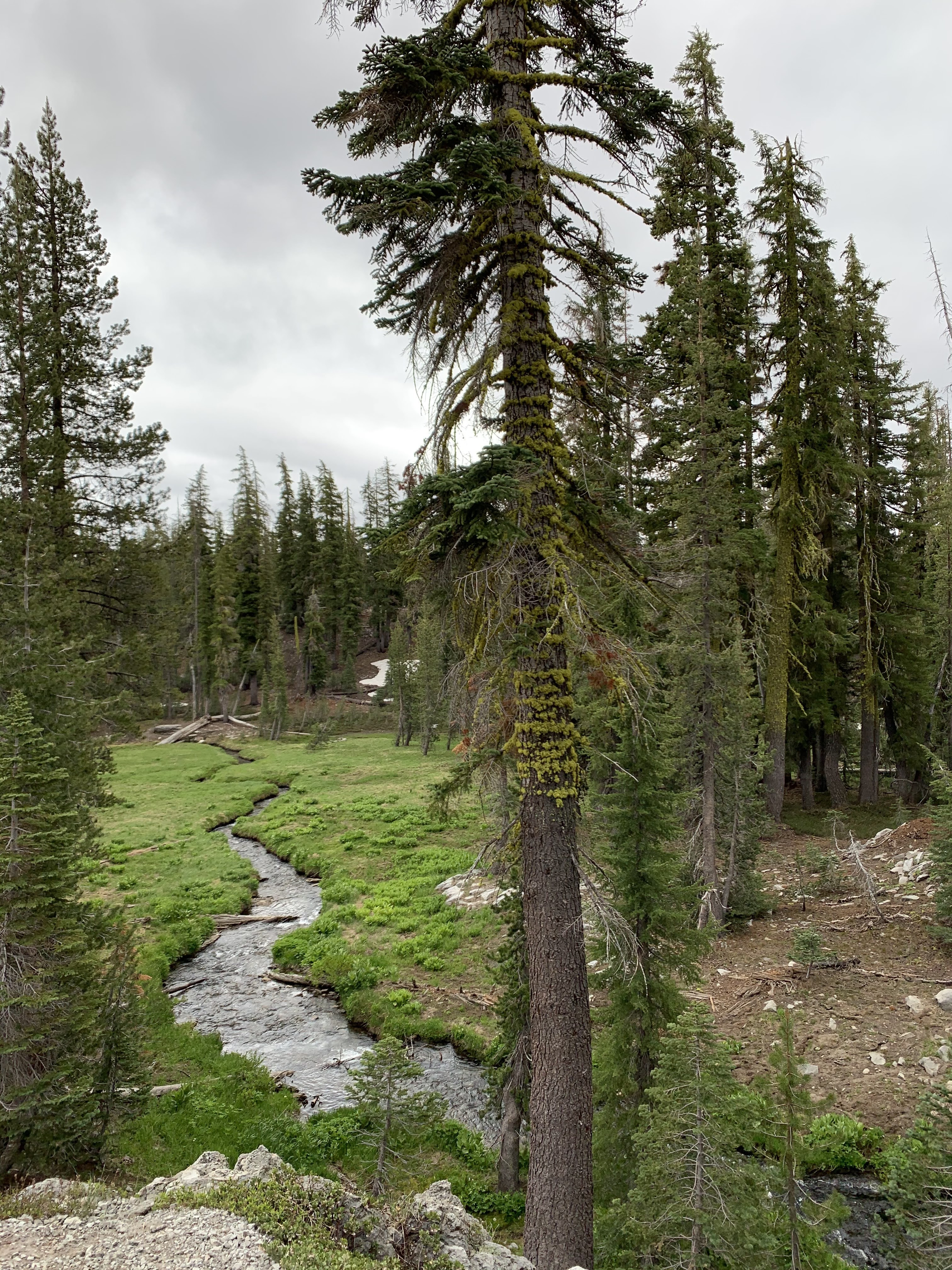 The park road is not a full circle, but rather a zigzagging crescent, and once reaching the southern end, we were left with the choice of backtracking to the northern entrance, or taking a scenic tour east and then north back to our campground. We chose the latter, and had a great drive through further interesting and varied scenery, particularly once we took to the back roads to work our way across a valley before reemerging in the small town near our resort.

Aside from the interesting geology and history, the area is stunningly beautiful; the 30 mile park road comes highly recommended by travel connoisseurs at Shell On Wheels. Don’t miss it if you are in the area, and it is well worth a day trip as well. We enjoyed our short stay, and considered remaining another day, but other adventures called.

So that is 33 out of 63 US national parks we have had the pleasure to visit. Those numbers do not include the 18 other categories of properties managed by the national park service such as national monuments, recreation areas, lakeshores, seashores, historic sites, parkways, preserves, reserves, trails, etc. (which currently totals 423 places); just the official national parks. In fact, when we first started this full time RV adventure there were only 59 of them; with Gateway Arch, Indiana Dunes, White Sands, and New River Gorge added since 2018. We don’t expect to hit all of them; some require a lot of effort (i.e., money) such as the Gates of the Arctic national park in Alaska, accessible by air taxi, but we do plan on hitting as many as our travels allow. 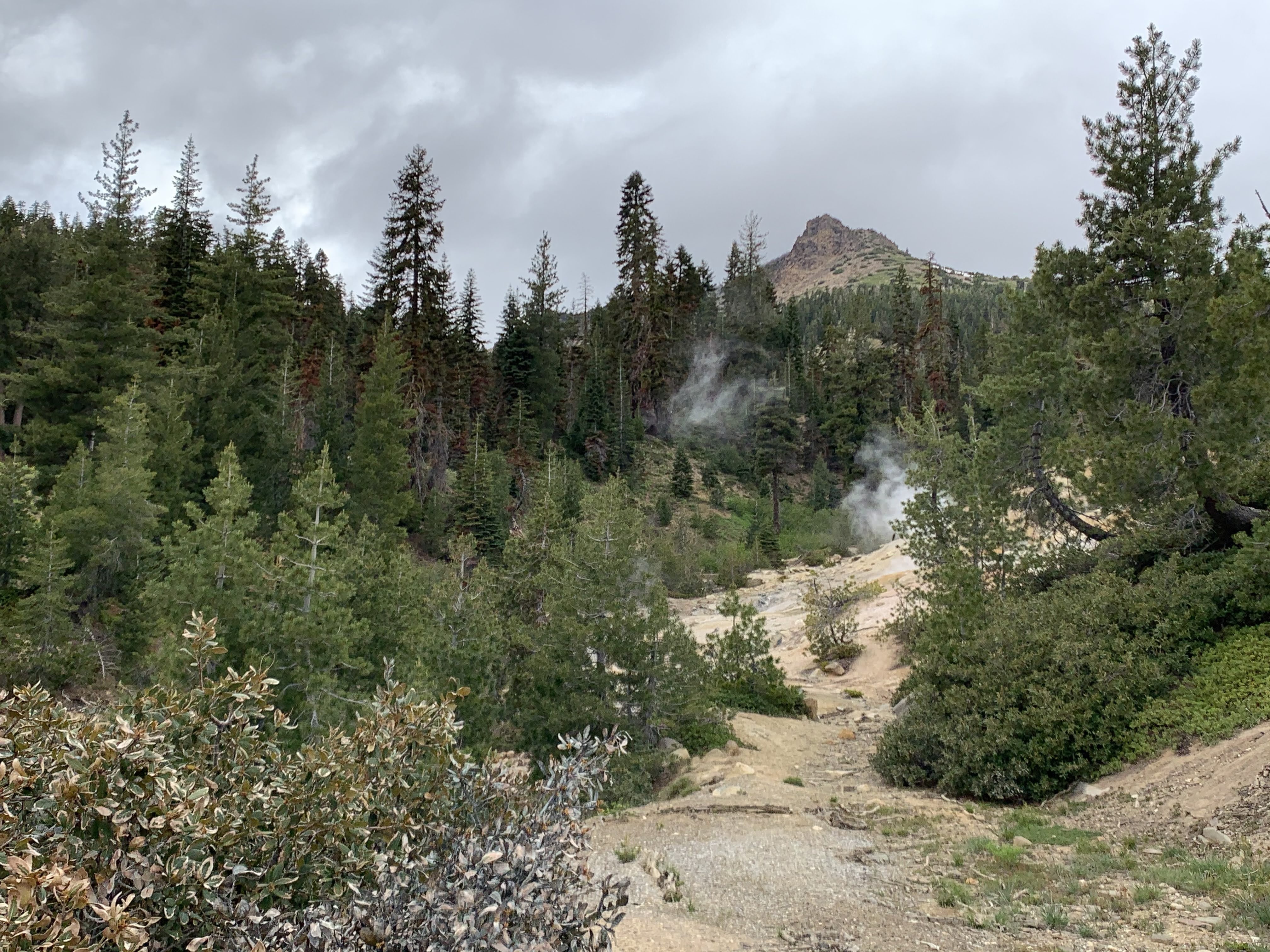 Next up: Into Oregon and Crater Lake National Park. 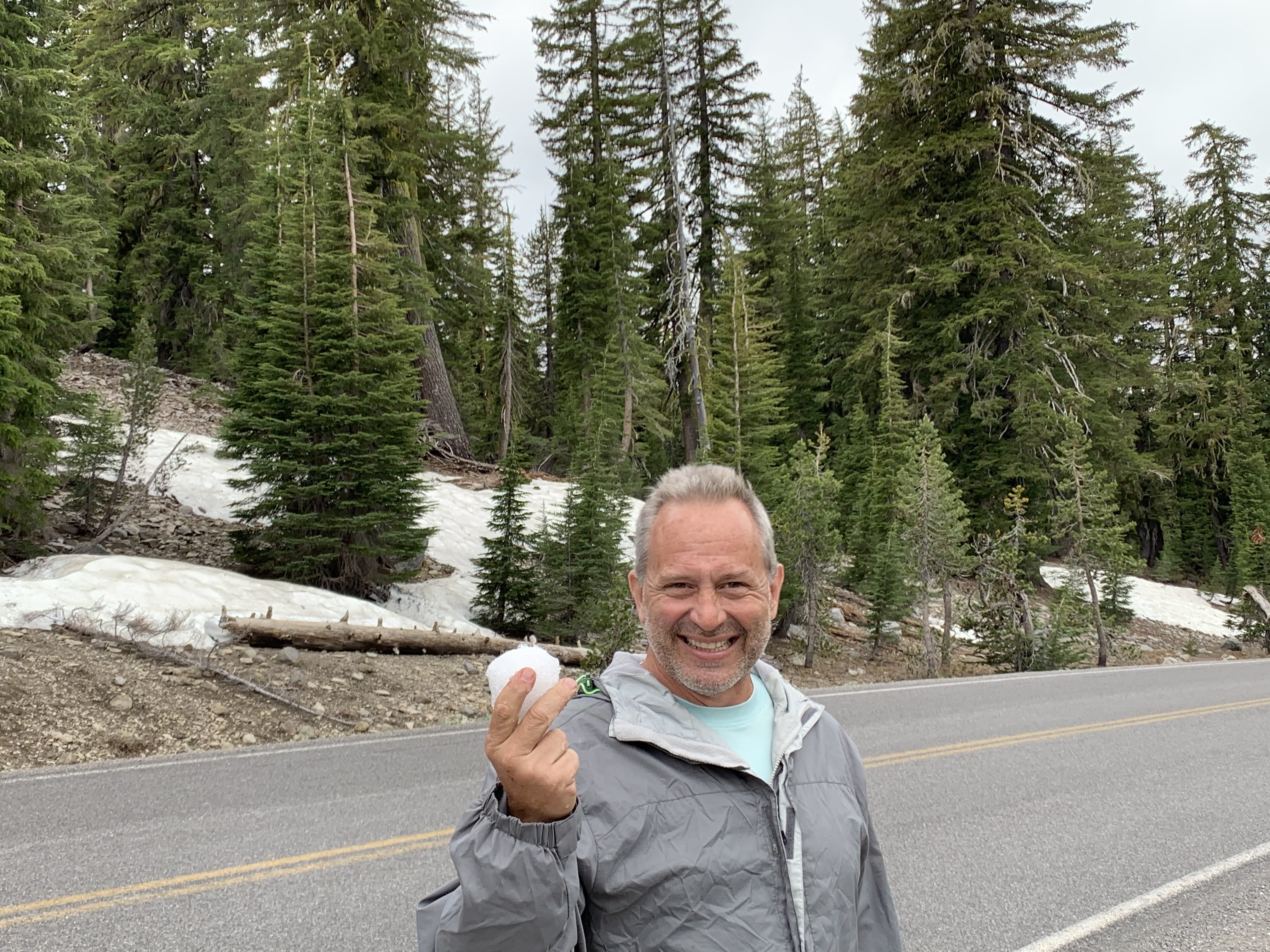