We left Asheville in the rear view camera, headed west, eager to make up a bit of time in both the recent “we’re getting a late start on this year’s travel” and the long term “we haven’t been able to go west in three years” senses. Regarding the latter: we had planned to do our third tour of the US West in 2019, moved it back a year to accommodate a trip to Cuba, and then pushed it off again in 2020 due to COVID. 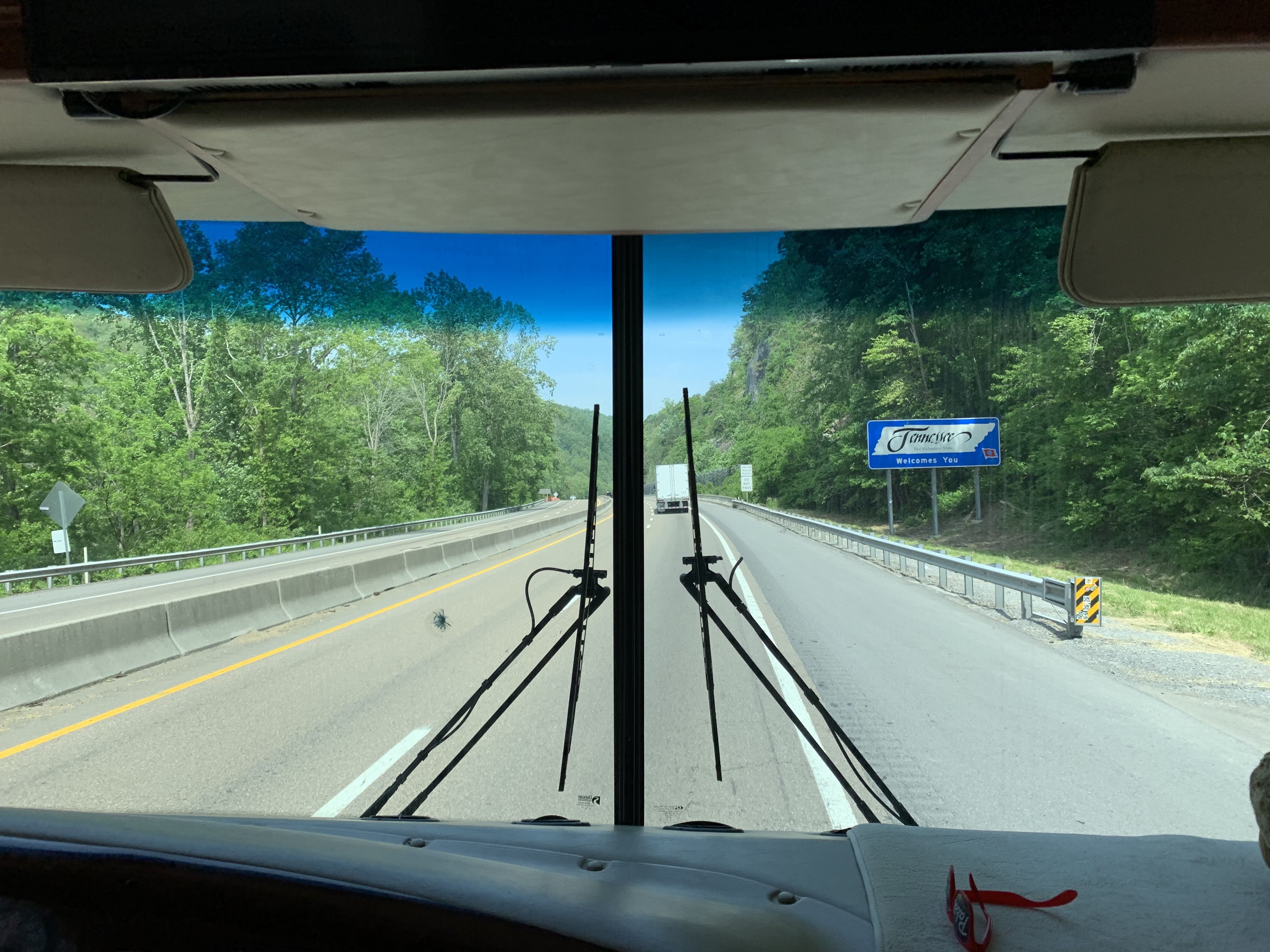 As such, we did what for us was a sprint across the country, putting in more miles per day than our usual comfort level (four hours or 250 miles) allows, and making a series of one day stops with almost no prior planning or reservations along the route. We wanted the flexibility to push on if we felt like a long drive or stop short if not. To the extent that we did plan, it was “head west on I-40,” at each night’s stop select a few possible campground options for the next day, and hopefully have our actual western destination sites selected by the time we get to New Mexico.

It worked out quite well. We eased into things with a five hour run to Central Tennessee the first day, stopping at only our second Corps of Engineers campground ever, Seven Points in Hermitage. Seven Points is an excellent campground located on a large lake reservoir, and like most COE campgrounds, it is well maintained and firmly managed. The sites are large, spaced out, and under modest tree canopy, just the way we like them. 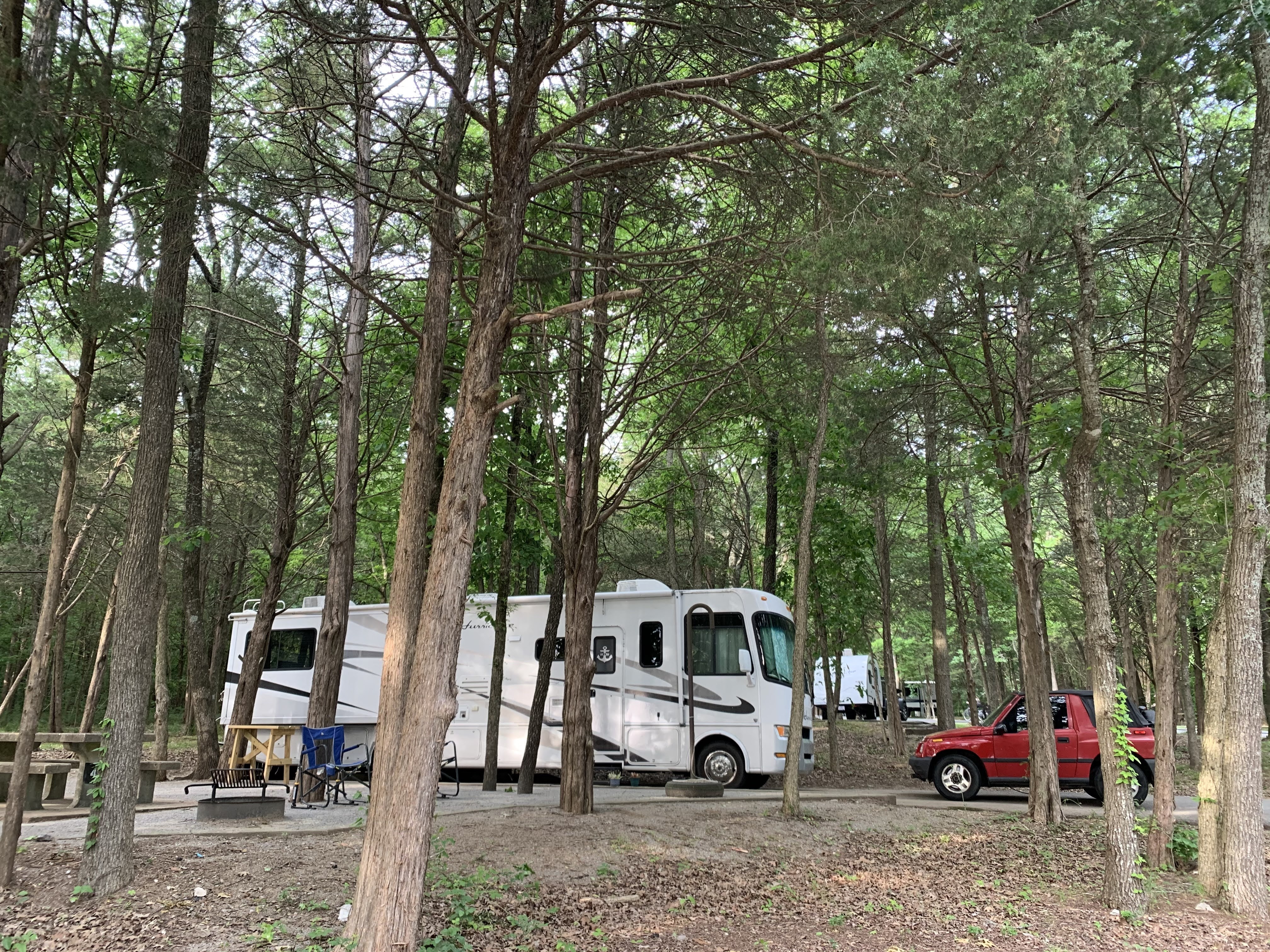 We did not have reservations since, as stated above, we were not sure how far we would drive that day, but I had checked the web page the night before and noted a handful of available sites. By the time we got there we ended up with the last open spot. Huzzah! It was $26 a night for electric and water, which is a solid price considering the proximity to Nashville. Given less urgency to keep moving, we would have enjoyed a couple of nights here. Alas, it would be but one this trip.

The second day we picked up the pace, crossed the Mississippi and pushed deep into Arkansas during a six hour, 366 mile run. We made it as far as Little Rock, which has an Air Force Base with a Family Camp (the Air Force specific name for their RV parks and campgrounds.) While writing this post I could not for the life of me remember anything about the place, and having failed to take any pictures I resorted to looking it up on U.S. Military Campgrounds and RV Parks, where the reviews and photos sparked my memory.

Using the perhaps tiresome “Good, Bad, and Ugly” framework, the park is conveniently located less than five miles off I-40, safe in the way that all parks actually on a military base are, and dirt cheap at $20 for a full hook up site near a major city. “The Bad” would be the crap shoot as far as which section of the park you end up in, with the back section an extended loop in a partially wooded area, while the front is an ugly parking lot. “The Ugly” is the surprisingly poor maintenance of the area, particularly the front section with muddy, fire ant infested sites. At $20 we weren’t concerned about such things, but if we were staying in Little Rock for more than a one nighter it would be worthwhile to do a bit more planning and aim for the back, nicer section.

Day three we put in another nearly six hour drive, logging another 329 miles west to Tinker Air Force Base FamCamp in Oklahoma City. With nearly 1,000 miles under our belt since Asheville we rewarded ourselves with a two night stay. There we learned that the Air Force’s Frequent Camper Program, an excellent in concept but shakily managed program designed to encourage greater use and exploration of the many AFB parks, has been cancelled. This is a real shame, and the cynic in me assumes that the reason for the cancellation is that it was so poorly managed that someone decided to just chuck it rather than fix it. 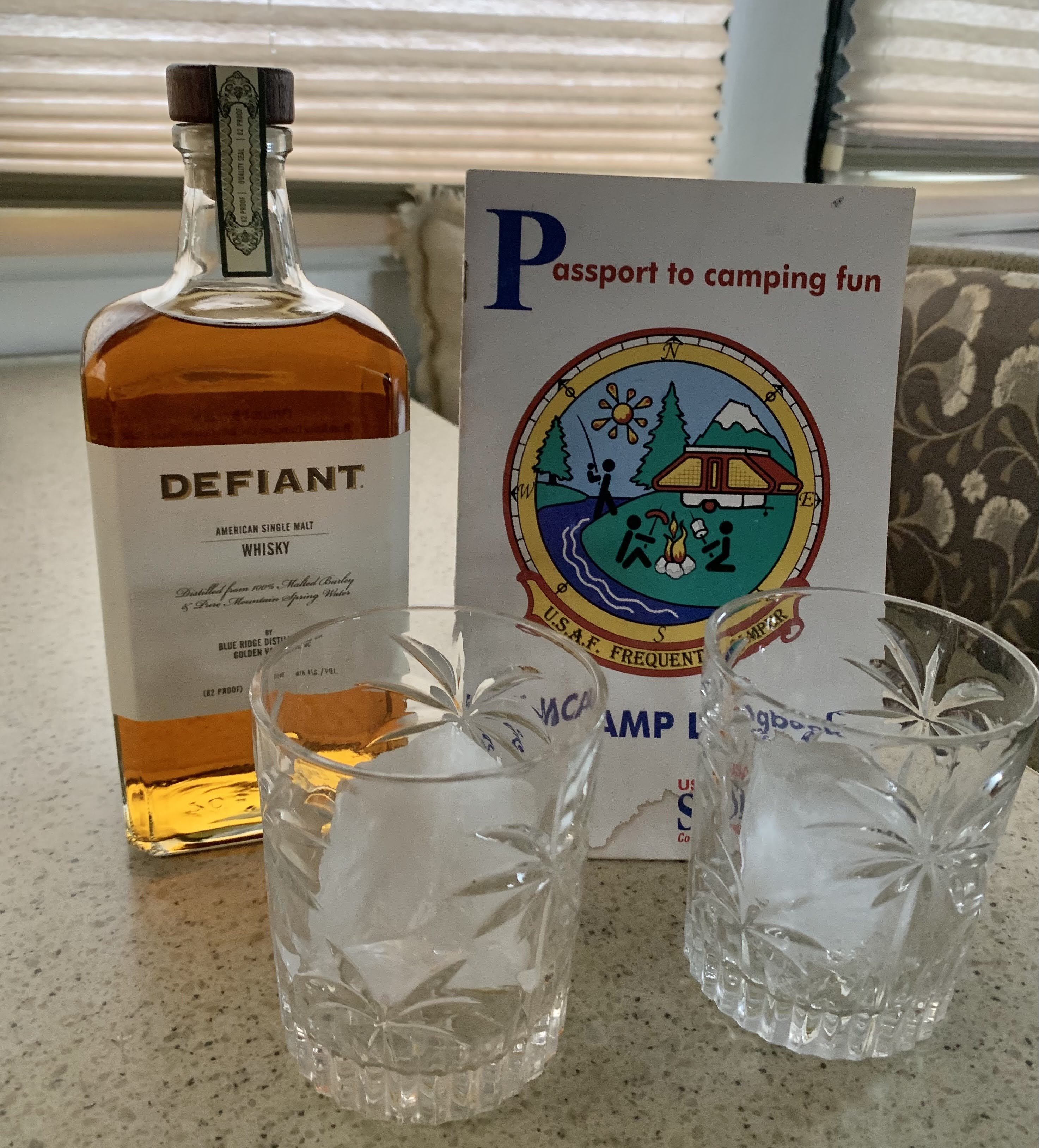 A quick primer on the now defunct program: for $40 bucks you bought the initial package, which gave you a passport type booklet, five free night certificates, and some swag (patches, pins, stickers, etc.) One free night cert could be used on a stay of two nights or longer. Once you stayed at ten different FamCamps you sent in copies of the appropriately stamped passport, for which you would receive five more free night certificates. The two main problems with the program management were the lack of available initial packages (it took us four bases to find one back in 2016, and we hear it has gotten worse) and the lengthy delays in getting follow on certifications after sending in your stamped passport pages (it took us months and several follow up emails to get ours.) 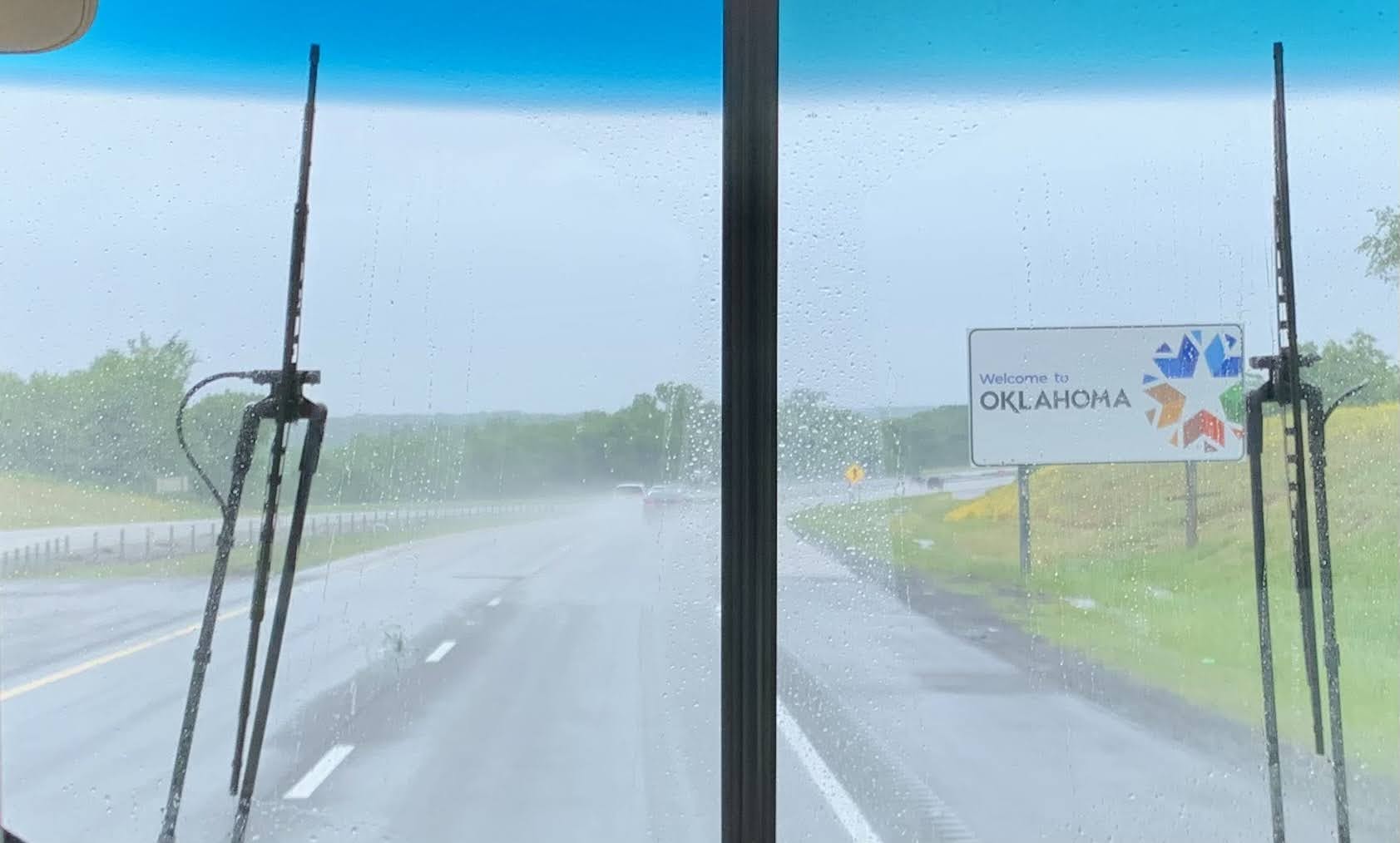 Ah well, RIP that program. If you have the passport booklet you can still get it stamped at most places, and at least some FamCamps are still honoring existing free night certificates if you have them. We used one of ours for our second night at Tinker, though it feels a bit wasteful on a site that only costs $20 for full hook ups. The campground itself is decent, though a bit tighter than we are used to at FamCamps, and with a couple of sites roped off due to flooding. 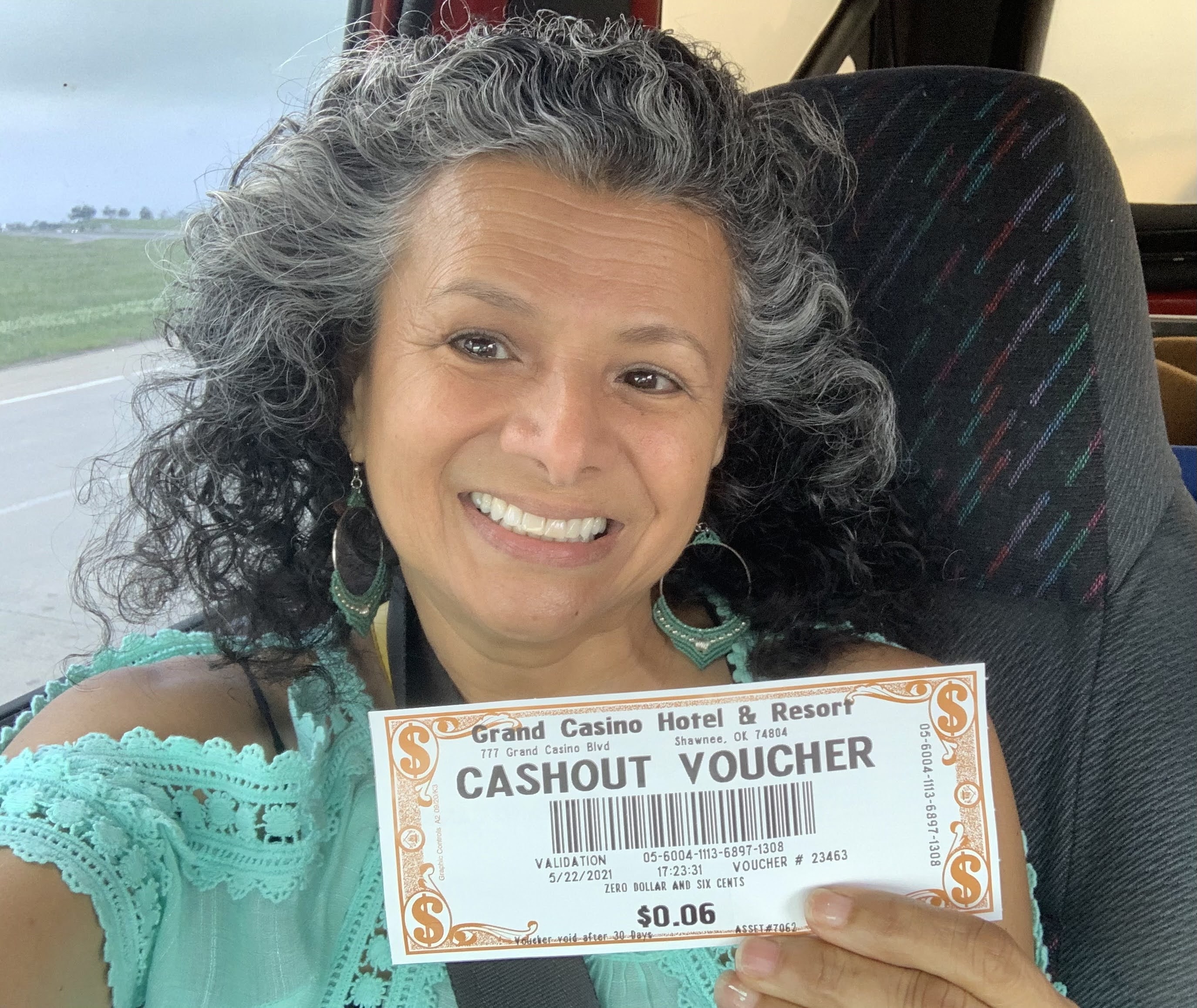 While there a Facebook update resulted in multiple inquiries from Sigsbee friends and acquaintances, and after some coordination we were able to meet up with Terri and John for dinner. We wanted steak, because when in Oklahoma what else should you eat? They picked Bandana Red’s Steakhouse, a local, low key joint with well priced sirloins, for an excellent meal. The only downside was the place had apparently lost their liquor license, so there were no adult libations to accompany the meal. Thanks for a great time, Terri and John, until next time. 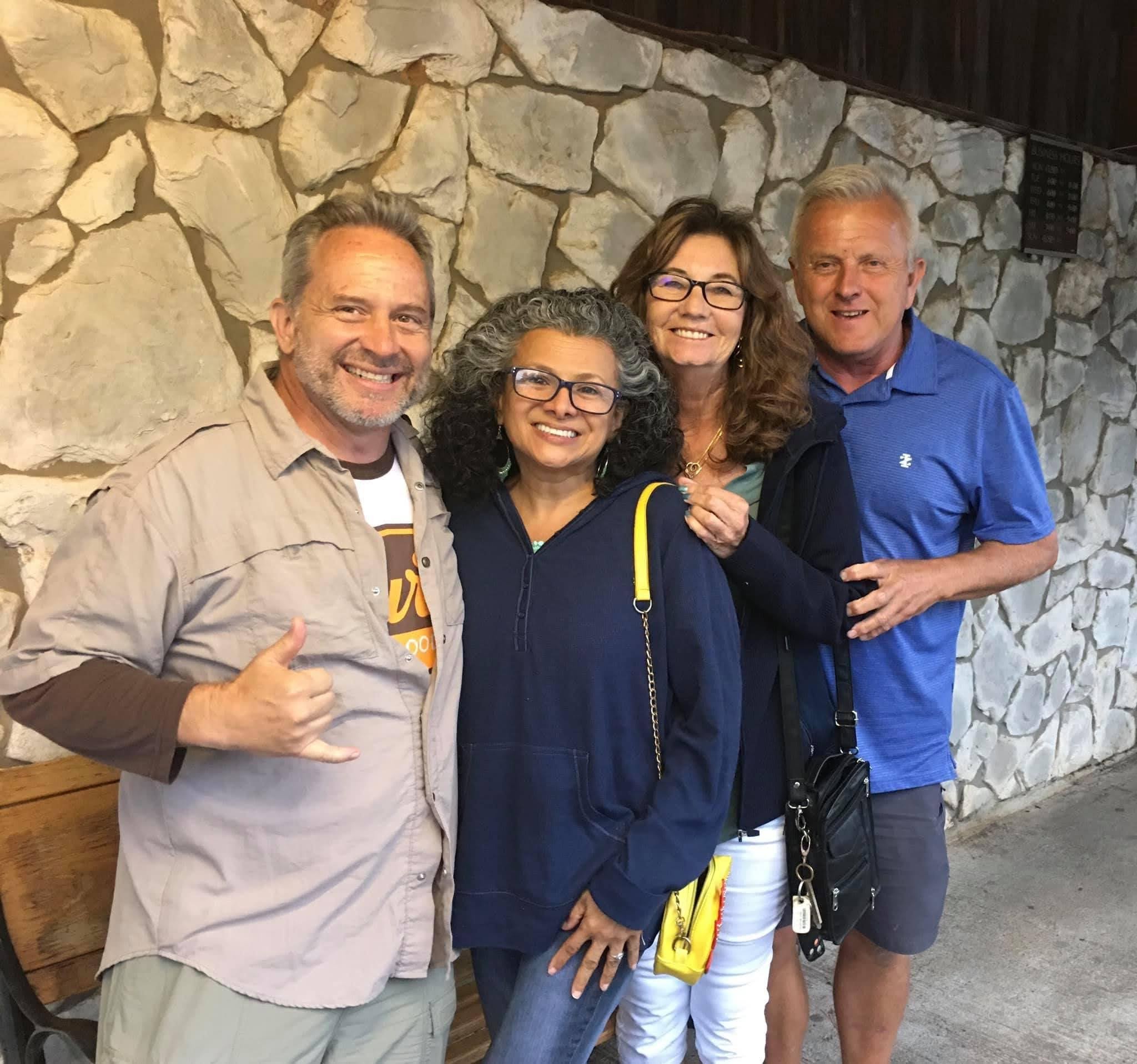 Time and distance precluded us meeting up with Sigsbee stalwarts Eddie and Tina, and after our two day recovery stay at Tinker we continued west, putting in another long day. We exited Arkansas, passed through the top of Texas, and after nearly 400 miles made it to New Mexico. Having run out of Air Force Bases and COE parks, we turned to Passport America, our sole remaining discount program, for another one night stop. We ended up at Blaze-In-Saddles RV Park, a well maintained place in Tucumcari. For $20 we had a spacious full hook up site just a couple of miles off the interstate.

So that’s that: a 1,356 mile, six state run that gets us to “The West” only a few days after leaving Asheville. Next post we decide between three, significantly different route options for the remainder of our journey to California.

2 thoughts on “Heading West: Asheville to New Mexico and Three Short Stops Along the Way”