We visited (and thoroughly enjoyed) Asheville some years back. We stopped here again, along with nearby Black Mountain, this summer, which reinforced our love of the region. And most recently, as part of our work camping gig, we lived in the area for nearly three months. Having been there a while we spent part of October very consciously acting a bit more local, while continuing to embrace the touristy sights and experiences of the region as well. 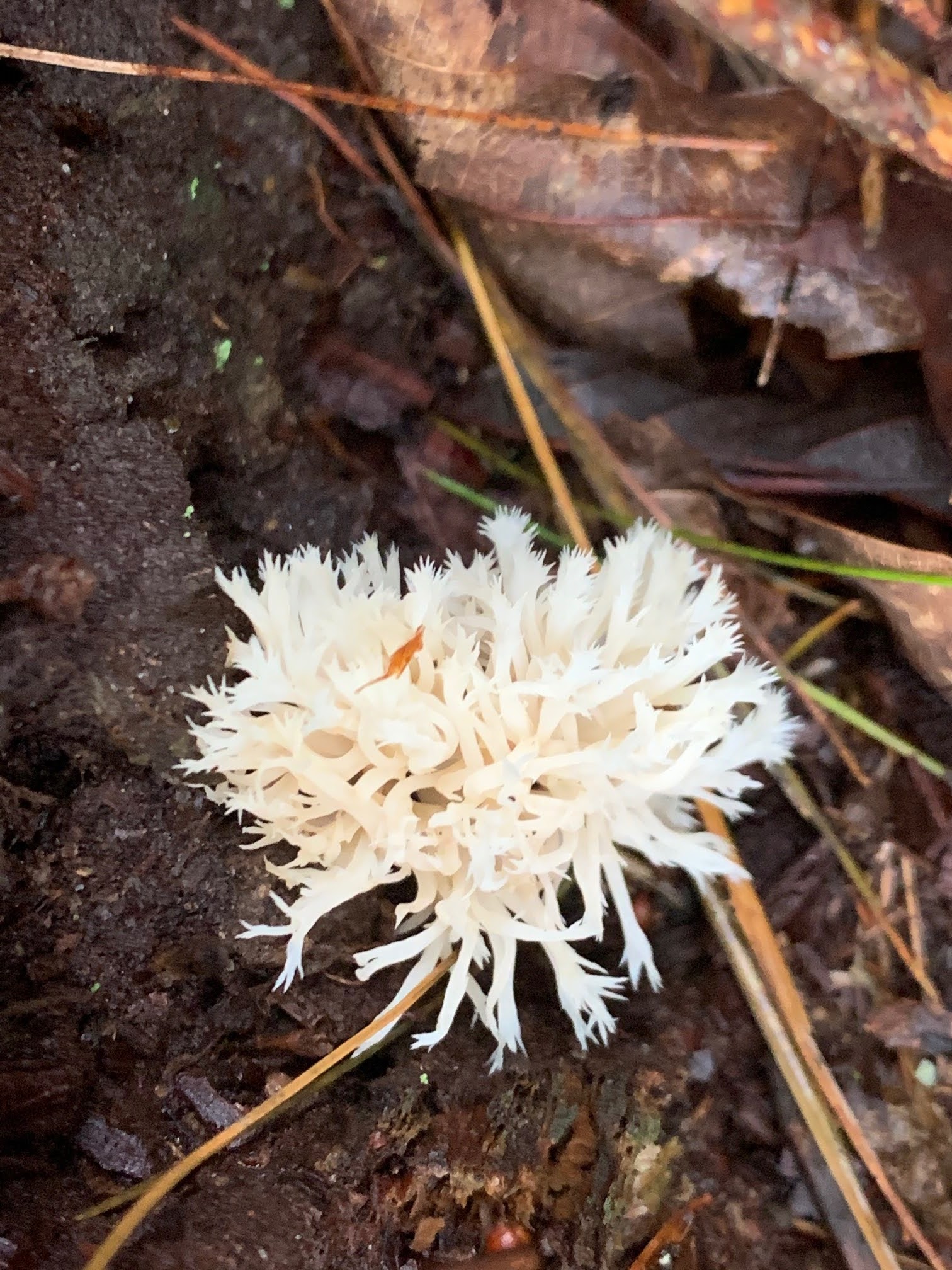 I get how those two things, tourist attractions and local favorites, often exist in noticeable conflict. In our travels Rose and I have found what we see as an unnecessary chasm between the them; locals too often dismiss the fantastic aspects of their town, particularly those that draw in the dreaded tourists, while the latter rarely dig below the easy and obvious tourist attractions. 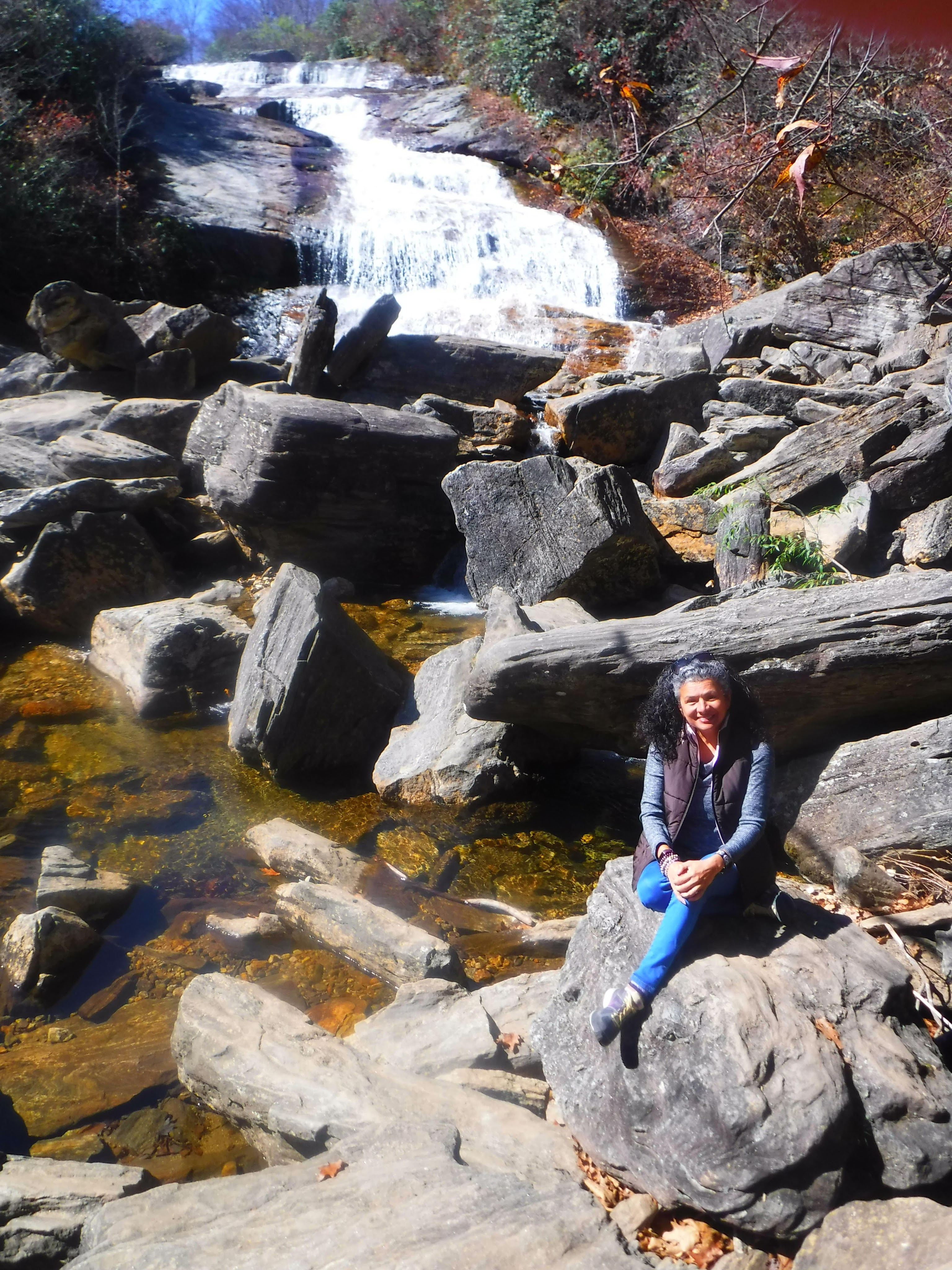 Our recommendation for locals everywhere is to embrace being a tourist in your own town, and for visitors anywhere to actively seek out those things that keep people living there. As locals, it is what we tried to do during our last year in Miami Beach. As tourists, particularly during our longer and subsequent visits to Michigan’s Upper Peninsula, Canada’s Nova Scotia, and now North Carolina’s western region, we have embraced this same dual perspective. 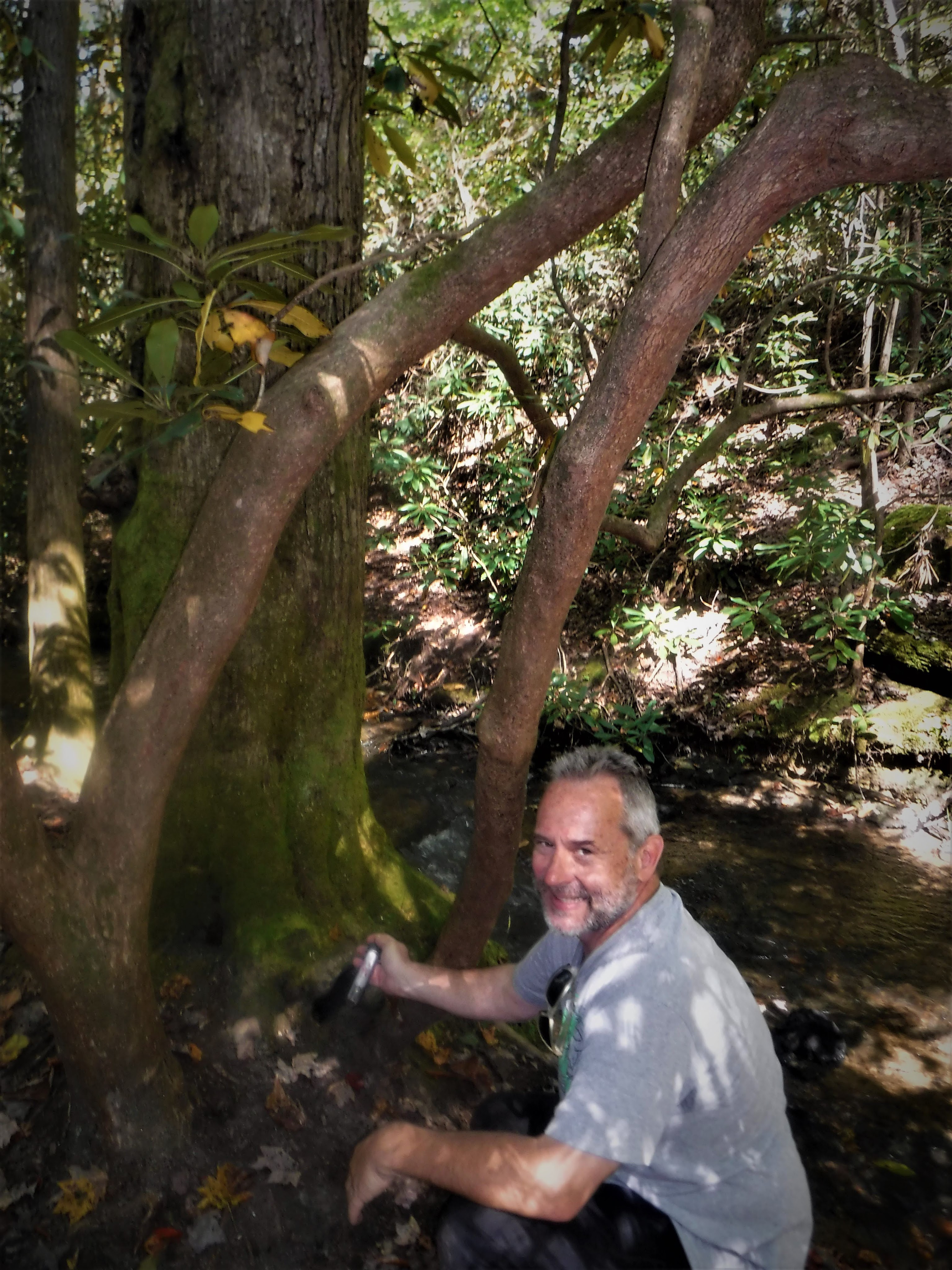 Geocaching within the North Carolina Arboretum grounds. This one was attached to an inconspicuous chain and dropped down a tree hole.

One thing I think locals along the entire East Coast Middle States and New England take for granted is the fall changing of the leaves and the explosion of natural color that results. With our campground just a few miles from the Blue Ridge Parkway, Rose made sure that we took advantage of such a serendipitous combination of timing and location. 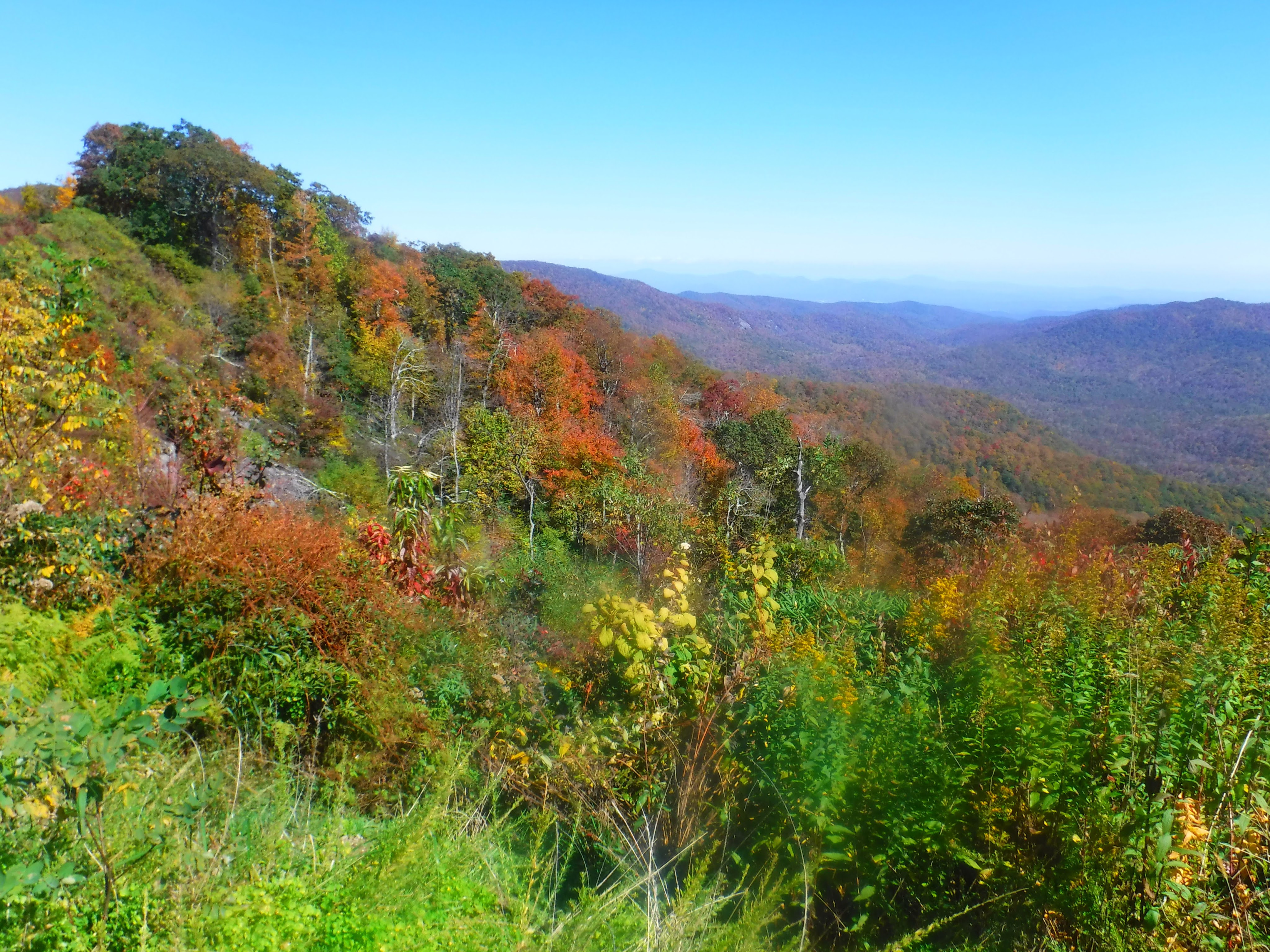 We made multiple short day drives both north and south along the parkway, enjoying an ever greater proliferation of leaf hues and contrast with each passing week. Things peaked in the third and fourth week of October, just before an extended mild freeze and associated heavy rain, after which one could sense true winter approaching. 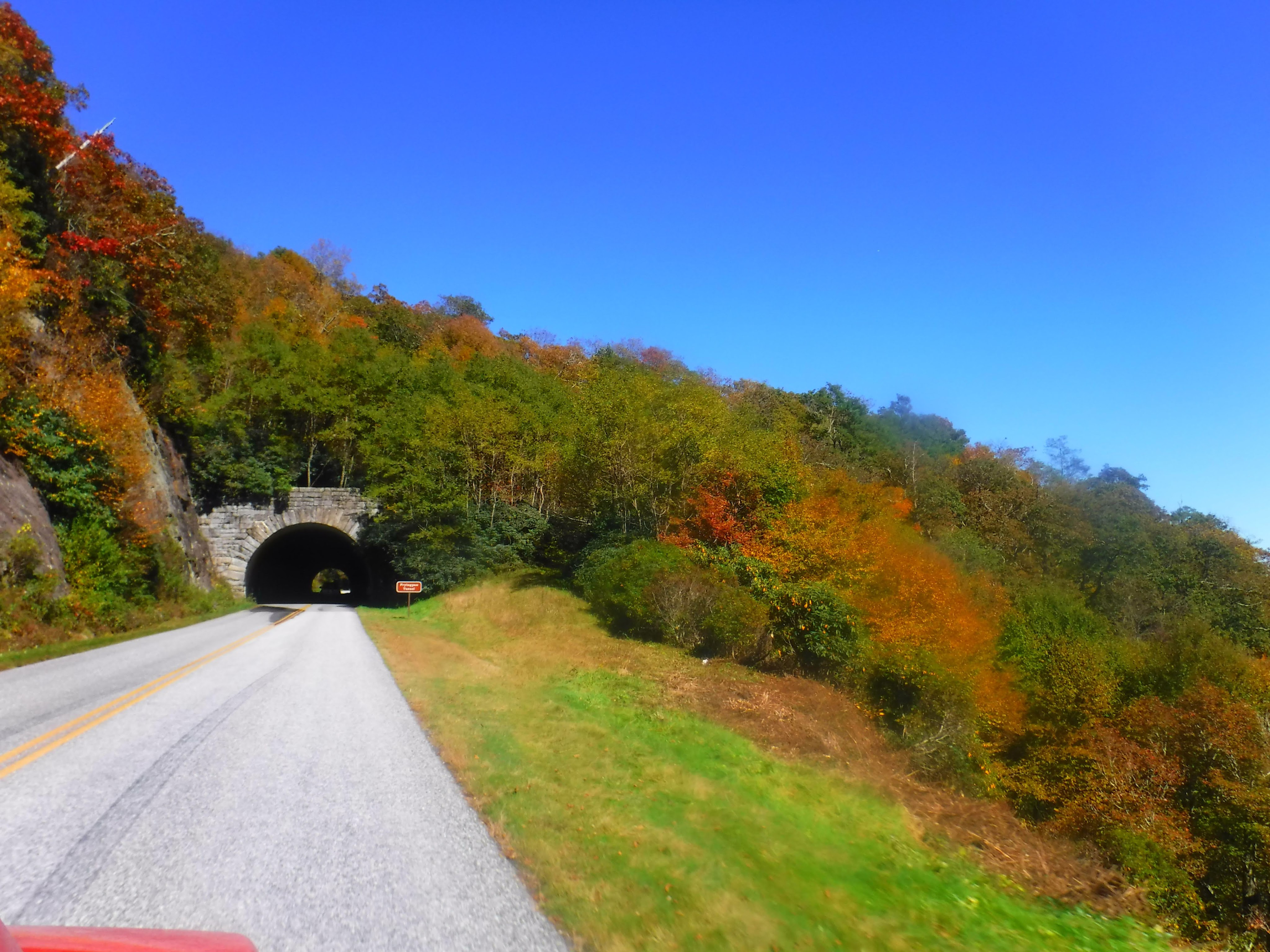 If that sounds a little too touristy for a supposed balanced regional view, consider the aggressive fungus hunting we did while in the Asheville area. It started harmlessly enough, with Rose downloading a mushroom ID app that we enjoyed consulting as we wandered and hiked around the southern Appalachian Mountains region. 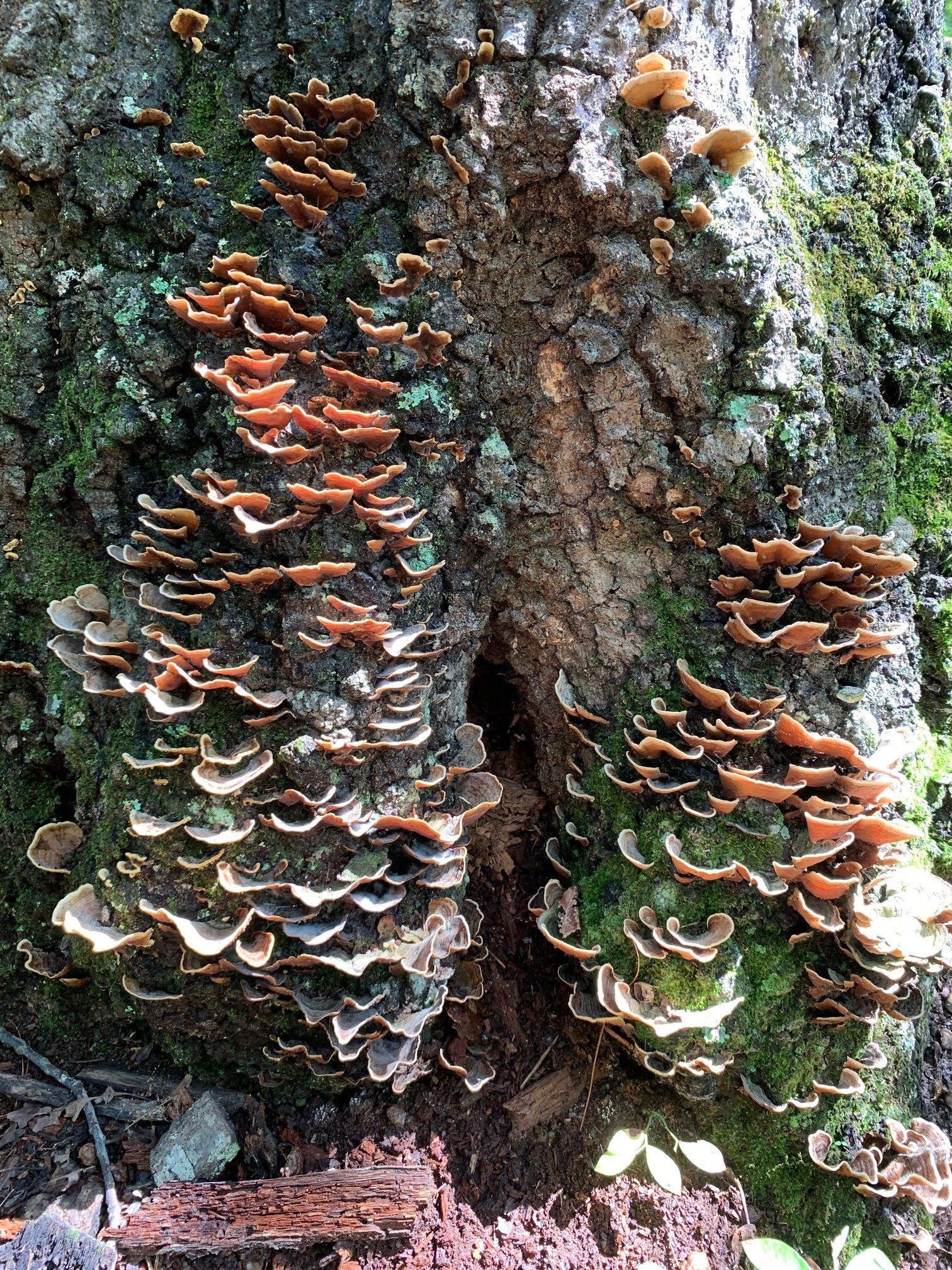 This casual pursuit turned serious once we stumbled across a woman foraging a rather sought after shroom, a Blue Indigo, right beside the main road in our campground. We met this forager later that day at the local West Asheville Farmers Market on Haywood Ave where she got a positive ID from the local mushroom farmer and vendor. 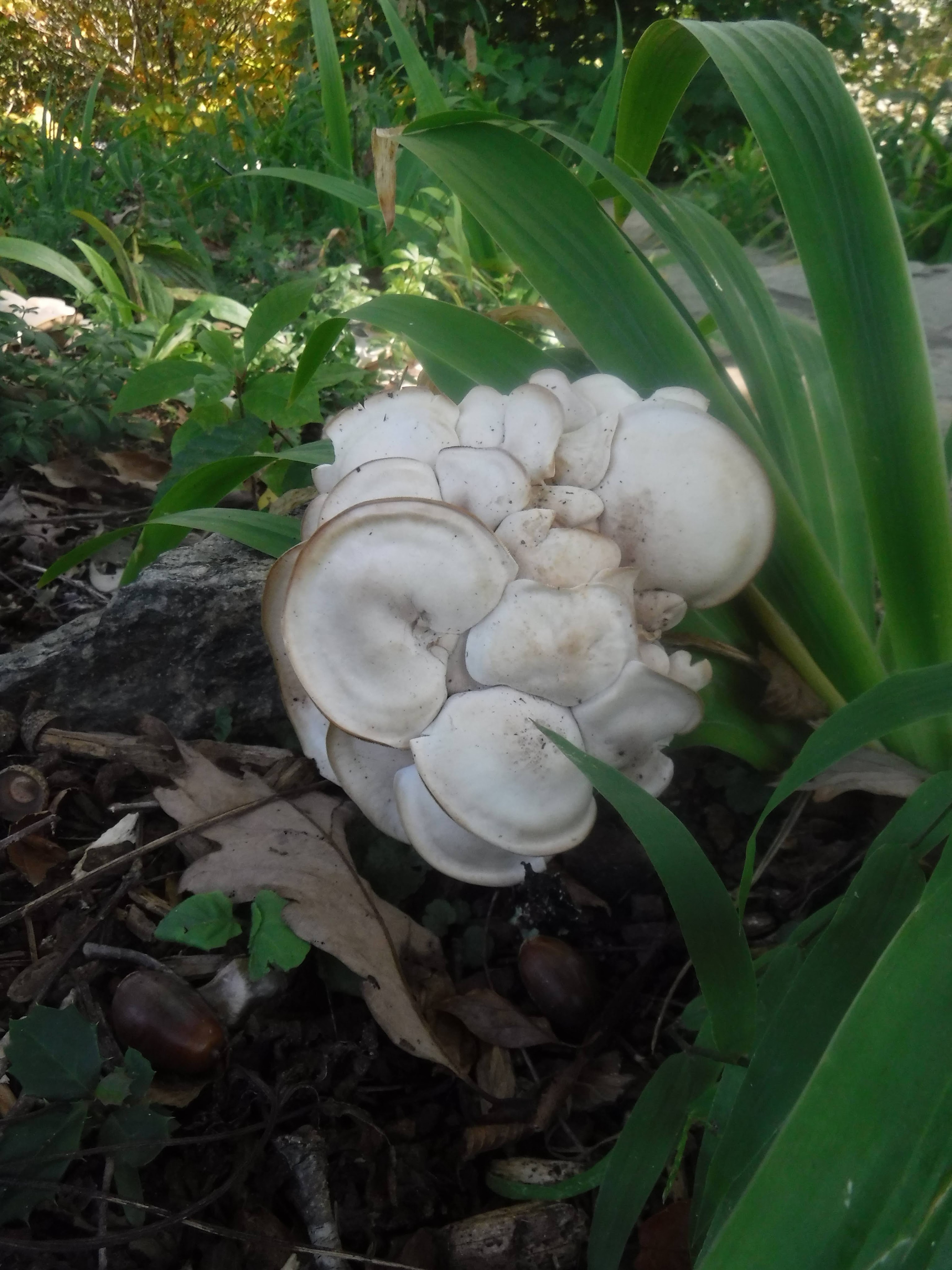 In addition to buying from this helpful and knowledgeable vendor every other week (with particular enthusiasm for his King Trumpets) Rose was inspired to forage a bit herself, and within a week had found a couple of her own Blue Indigos! Very lightly battered and sautéed in butter in a manner similar to what we witnessed with Morels in Indiana, they were quite tasty! 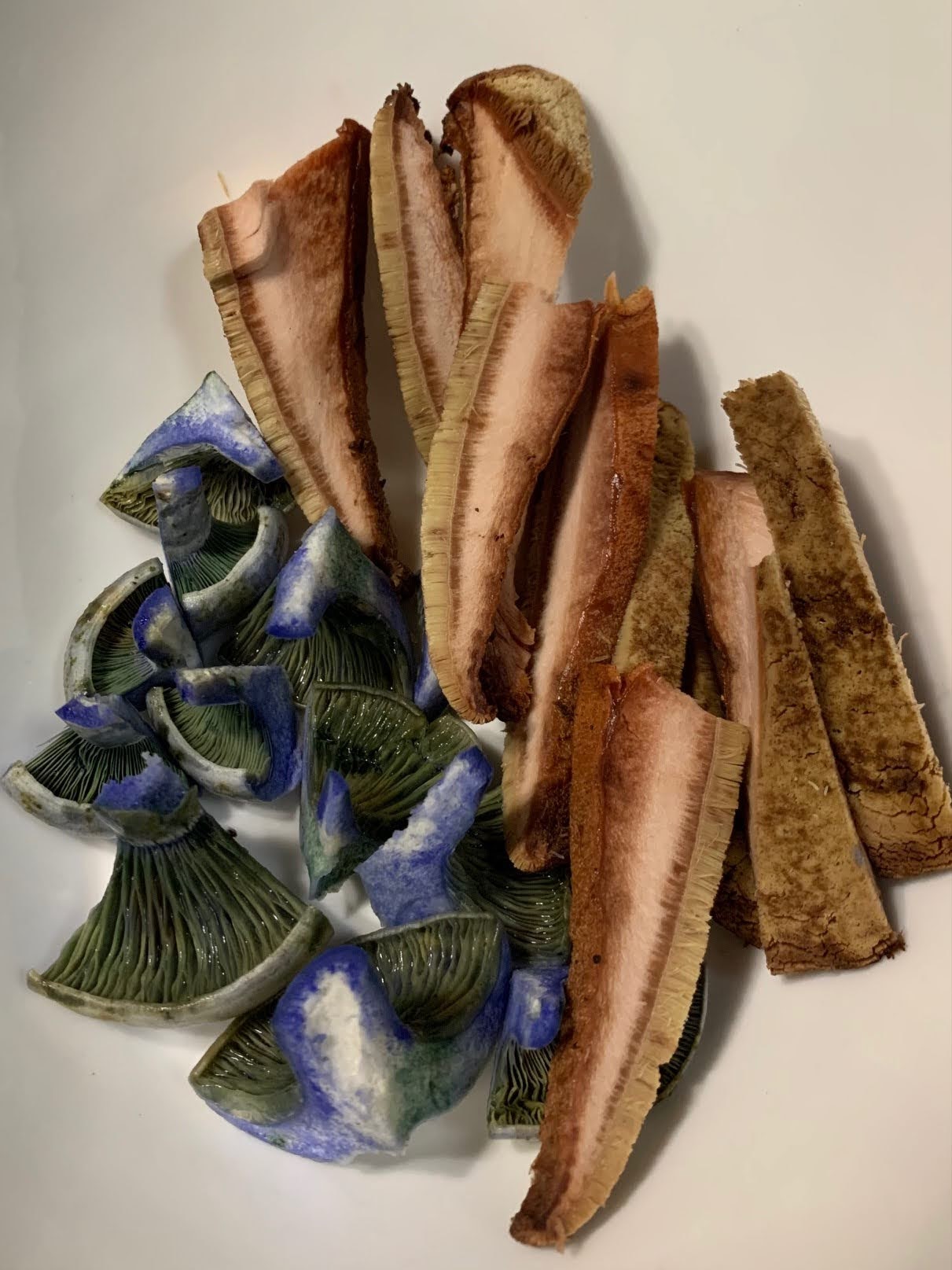 Slices of Blue Indigo next to Beefsteak.

Thus further motivated, Rose discovered a significant cache of Hen of the Woods, or Maitake, polypores located at the base of a group of White Oaks behind one of our campground loops. This multi-pound, bigger-than-your-head fungus, once positively identified by our friendly neighborhood mushroom farmer, fed us for a week, either as a side dish or enhancement to main servings. 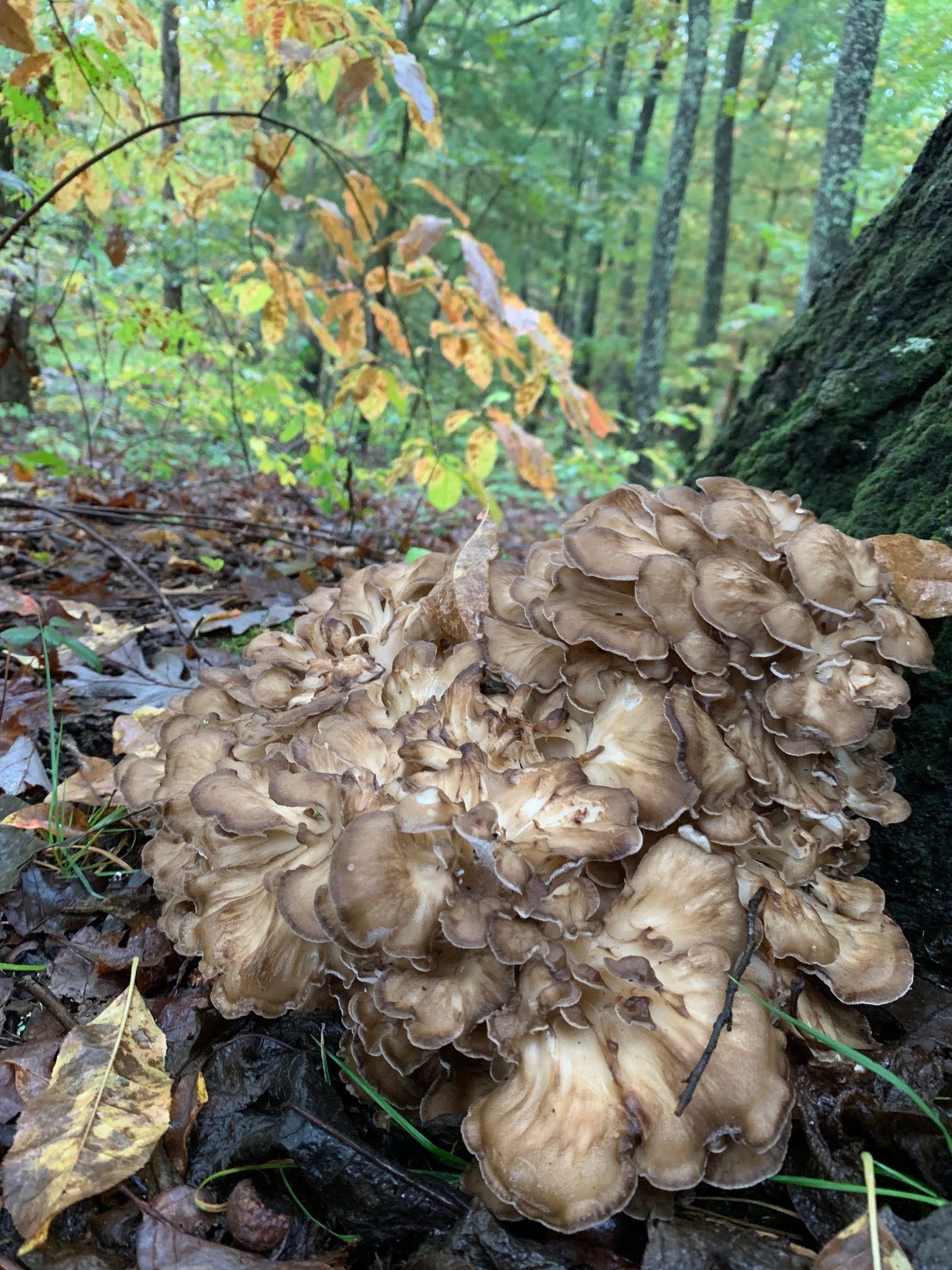 It wasn’t all easily found and edible foraging; the vast majority of what we discovered was barely edible at best to highly poisonous at worst. Regardless, we found the variety in shapes, textures, and color endlessly fascinating, and look forward to more wild foraging in future seasons and regions. 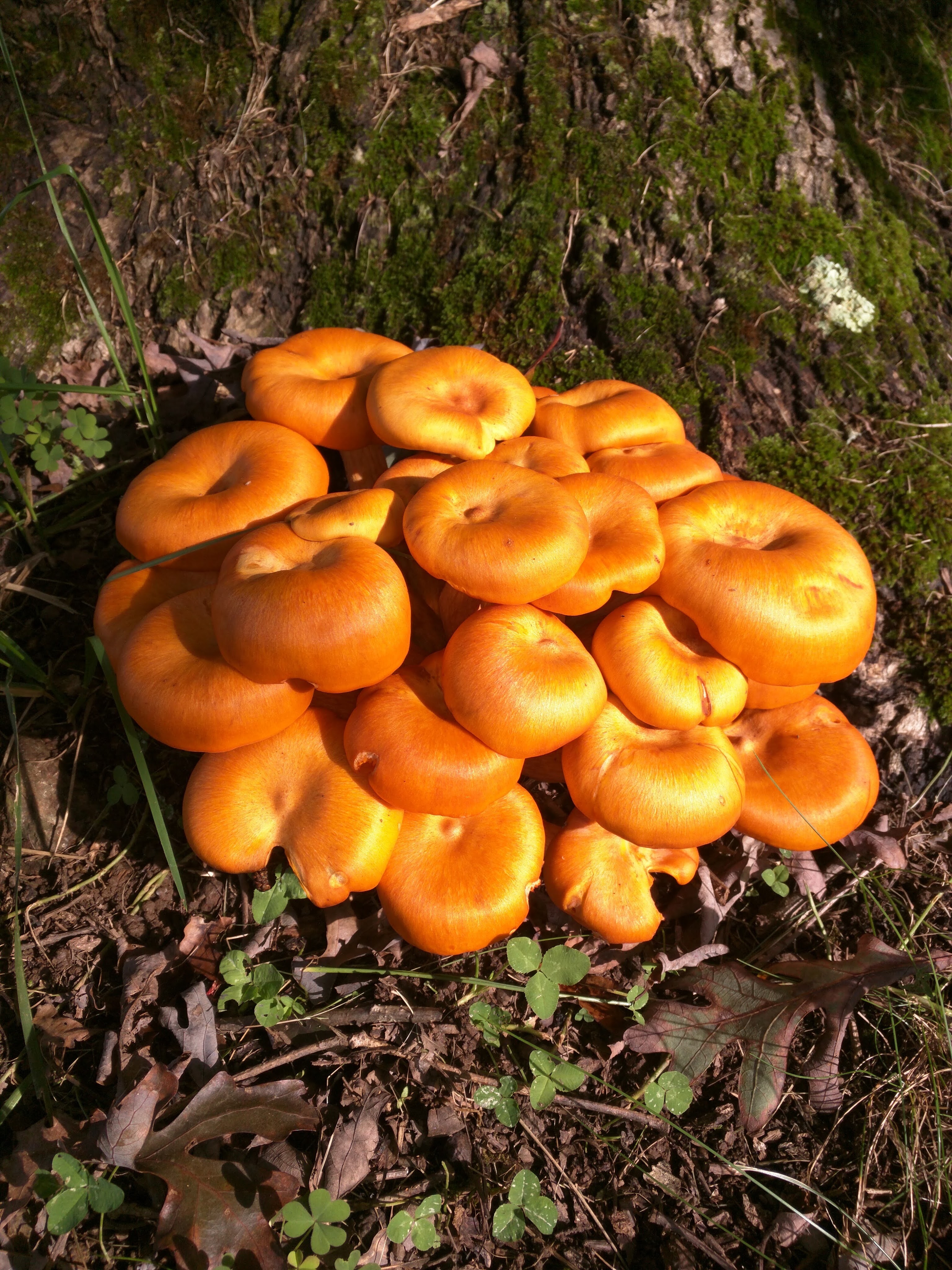 Per our mushroom ID app, these are highly toxic Jack-O-Lantern shrooms.

Next up: Quasi-Locals in Asheville, Part 2: Restaurants, Breweries, and Shops. 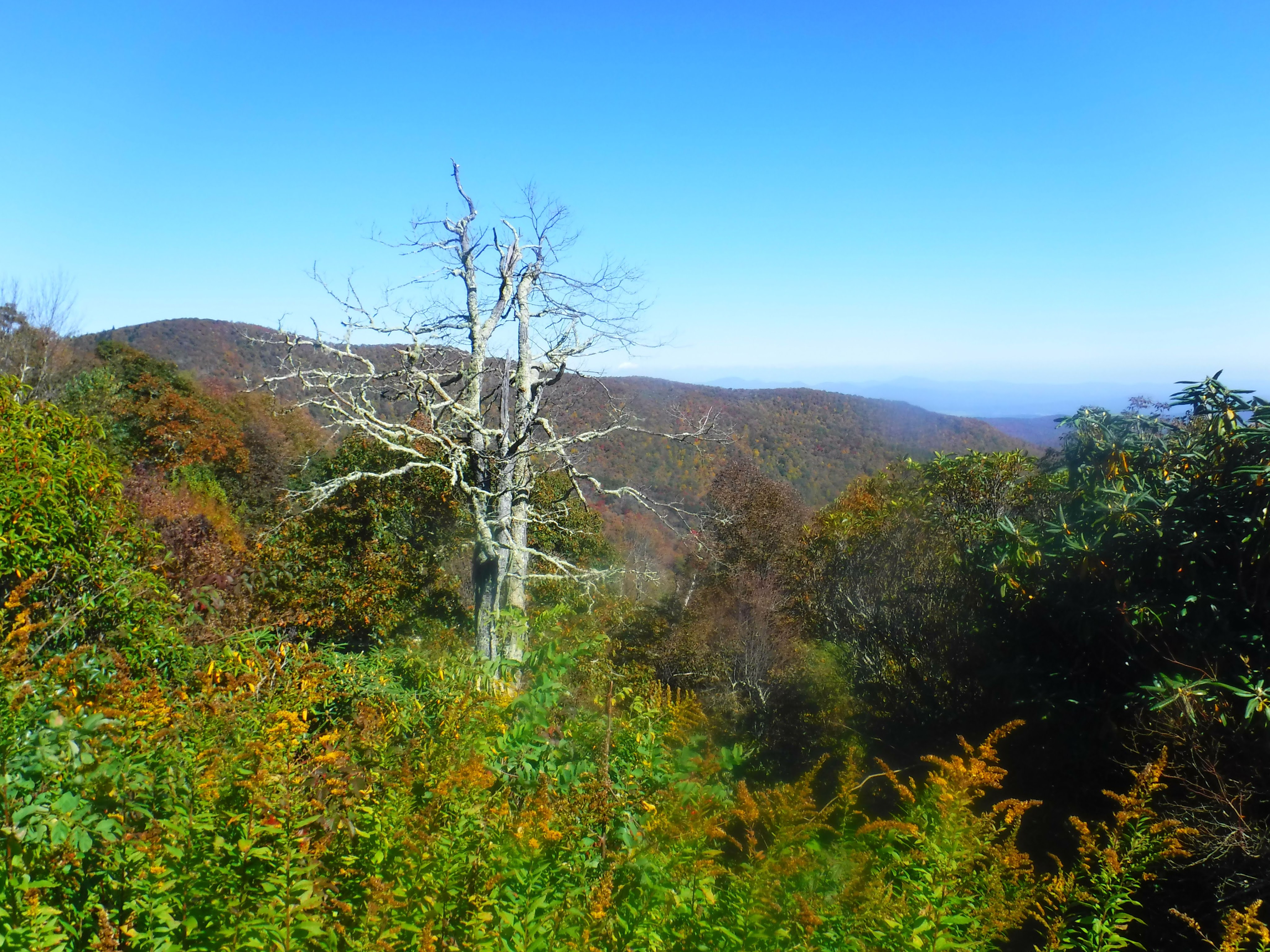 One thought on “October in Asheville: Becoming “Almost Locals,” Part One”