After an unexpectedly long but productive stay in Sanibel, nearly 10 weeks by the first of June, we had decided that three full months would be enough, after which we would make our way out of Florida.  So we took our last 23 days and made the best of our time on the South West coast, drinking in all that (mostly) safe social distancing would allow.

PKM admiring the picture clarity in our new (installed in March) smart TV.

We took care of some final medical appointments, got our prescription meds in order, prepped the rig and tow vehicle for travel, and visited Rose’ mom in Venice and dad and stepmom in Coral Springs.  But mostly we enjoyed Sanibel Island and her wonderful beaches, wildlife, sunsets, and shells.

The beaches occupied a lot of our out and about time, and we worked to vary our routine by visiting beaches we might have skipped over during the first ten weeks on the island.  While we still made frequent bike trips to the closest beach (Nerita) and lighthouse point, we also made sure to include the bay side of the island, which might not offer great shelling, but had very calm and clear waters, most unlike the ocean side. 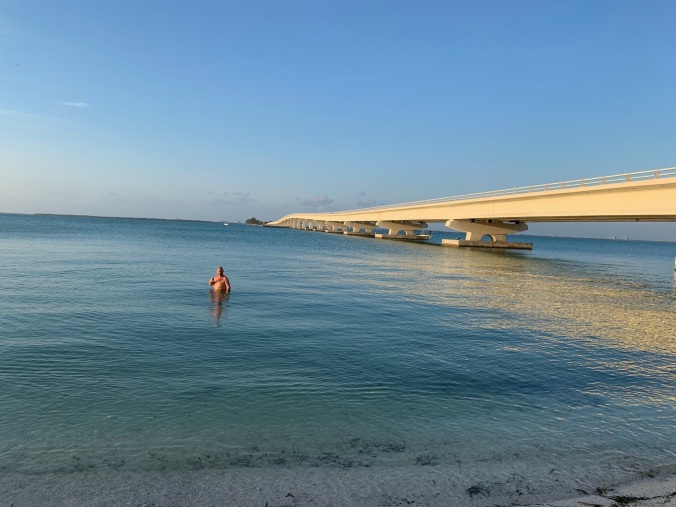 For a car trip, Bowman Beach will always be our go to spot: the parking is a bit steep at $5 an hour, but we know the area and the best spots for shelling, places that the crowds either don’t know about or have a hike apparently too long for most.  We can march out well beyond the scattered groups and have stretches of pristine sand nearly to ourselves.  We count the number of new sea turtle nests along the way to the big piles of shells ready for pouring over and digging through. 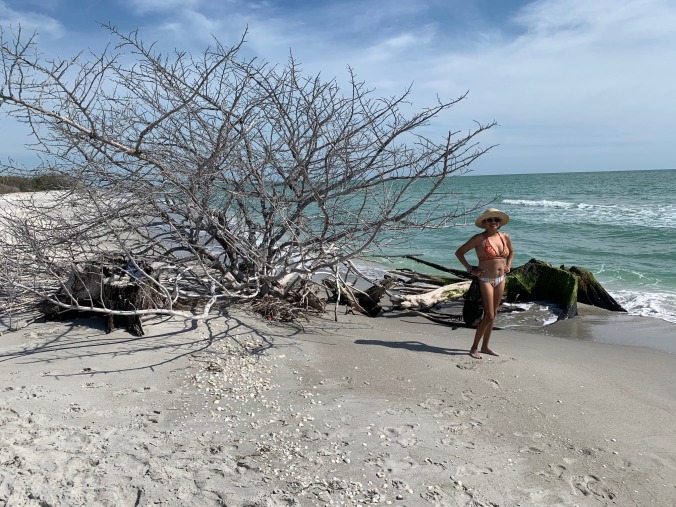 We also celebrated Rose’ big 55th birthday during our weekend visit with Xavier and Joy!  As always, Rose gets her favorite cake: strawberry shortcake.

This year we made frequent evening walks to the Sanibel Reclaimed Water system across the main street from Periwinkle Park.  I know that doesn’t sound tempting, but the series of ponds, islands, and surrounding swamp forests serve as a natural protected habitat for an extensive variety of wildlife.  This is where we see the most herons, egrets, anhingas, and gallinule’s, but also plenty of alligators and more rabbits than I thought could exist in such a small area. 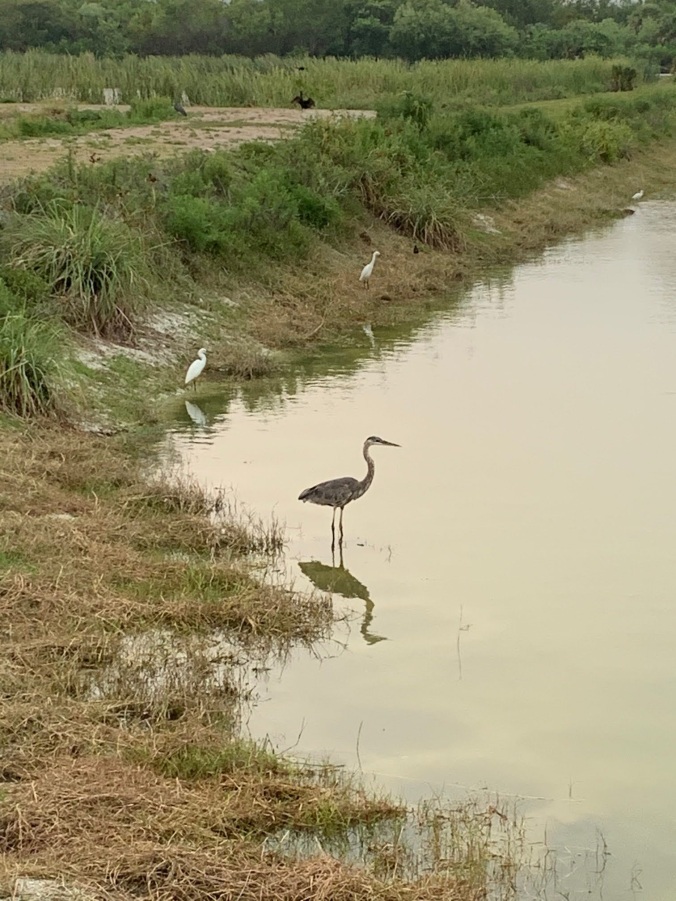 While we would often see one of the larger, at least for this island, gators in one of the major ponds, we also stumbled across a full dozen baby gators in a tiny pond along the boardwalk trail.  We later spotted mama gator in an adjacent pond, but in this tiny little body of water no more than 15′ by 10′ and perhaps 2′ deep we found the full brood of little guys, along with two snakes neither big enough to pose a threat to the foot long gators, nor small enough to serve as a meal for them.

During these last weeks Rose shifted much of her crafting time towards working on various resin projects, including cup turning, ornaments, and pendants.  The cups gave her hell; they require additional steps, involve a rotating rather than still object, and since they use a lot more resin and other supplies, Rose was unwilling to let any of them go as a learning event.  It either came out perfect or it was getting stripped and done over.  Here is her new heavily blinged insulated cup.

And yes, we are aware that saying has two meanings.  That is the point!

We also started making near daily visits to the animal enclosures, including the monkey cages were one of the squirrel monkeys had recently given birth, and would usually come down to say hello and show off her new born clutching onto her back.  From there it was to the main duck pond filled with not only local species, but many wing clipped exotics collected by the (previous?) owner over decades.  Even the wild ones have gotten very comfortable with visitors, coming right up the the fence to beg for food.

We are having trouble getting the baby monkey picture loaded, so until we sort it out, enjoy this unusual and beautiful tree we passed every bike trip to Lighthouse Point.

Finally, we stopped by the parrot area, with the facility serving as a rescue center for many exotic former pets who outlived (or perhaps merely outlasted the patience of) their previous owners.  With the crowds gone or reduced for months, the birds were vary eager for visitors and stimulation, with some begging not just for interaction, but also to get pet; you just have to watch out for the sneaky ones that pretend to want a neck pet just to lure in an unsuspecting but delicious finger. 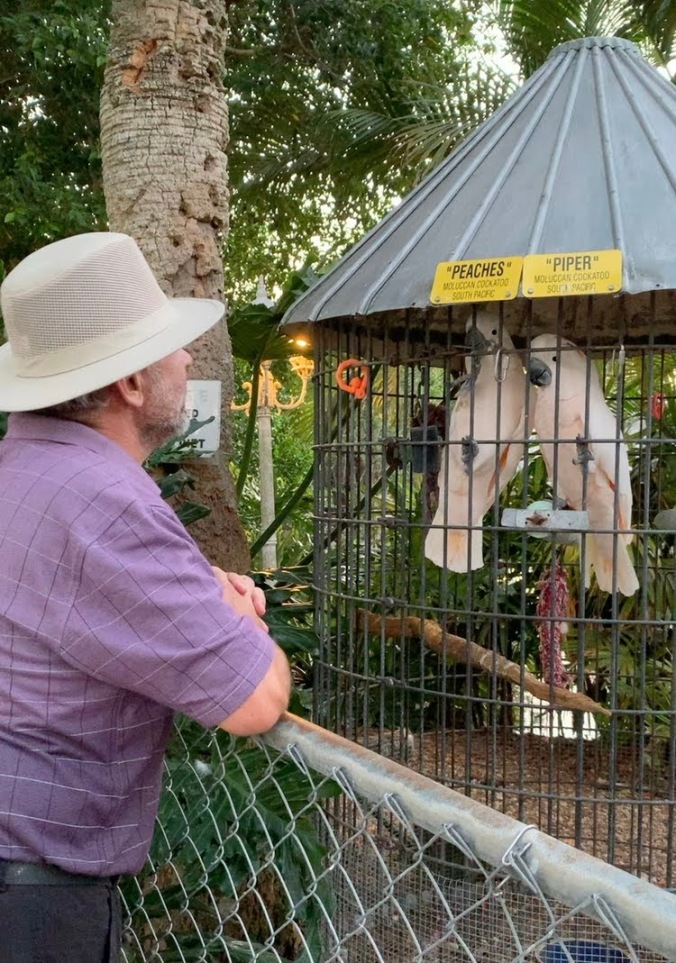 We have thoroughly enjoyed our three month stay on the island, and consider it to have been an excellent place to hunker down while assessing our options as the pandemic raged.  Having said that, it was time to move on.  I addition to a bit of stir crazy, we were growing increasingly concerned with Florida’s multi phase “reopening,” complete with full beaches, bars, and shops. 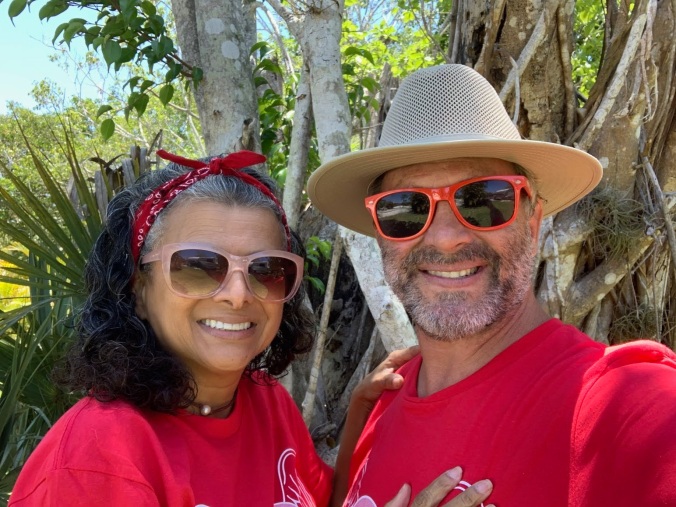 So excited to be back on the road but more than a little concerned about probable significant increase in COVID cases, we hit the road June 24th headed towards Central Florida.  More on that next post. 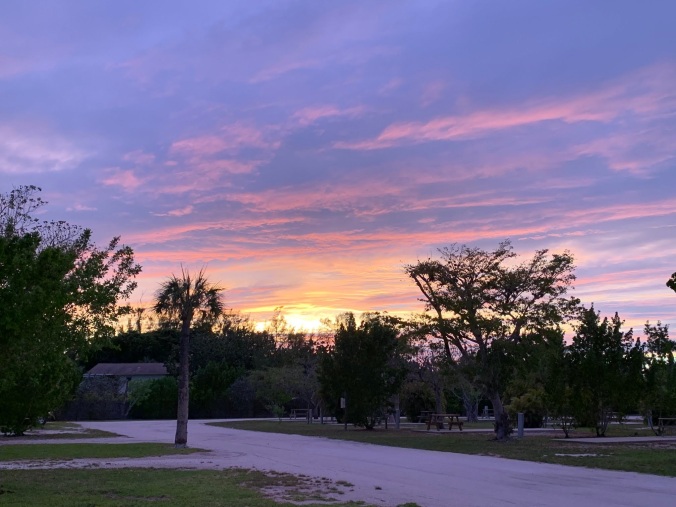