After a bit of trial and error we have determined that the ideal bicycle for Rosemarie is a 24″, single gear beach cruiser with coaster brakes.  It’s the right size, she doesn’t care for hand brakes, and we spend most of the year in fairly flat land.  This is also the perfect bike for salt water environments; the lack of gear and brake wires and calipers means fewer things to rust and jam up.  Just take a look at Rose’ current bike, which we purchased in mint condition for $40 at a bicycle thrift shop in Asheville just two years ago:

Look at all the rust on the brake calipers and handlebar stem.  It’s bubbling up through the paint all over and decimating the unpainted pieces, and this is after just two winters in coastal Florida.

During our visit last Fall Gloria alerted us to her neighborhood’s bicycle graveyard, an area near the dumpsters where people park no longer wanted bikes.  She initially thought I would find something I liked there, but none of the dozen or so abandoned bicycles looked any better than my current entry level mountain bike I got from brother-in-law Jerry.  There was, however, a rusted up but still functional 24″, single gear, beach cruiser with coaster brakes.  Huzzah! 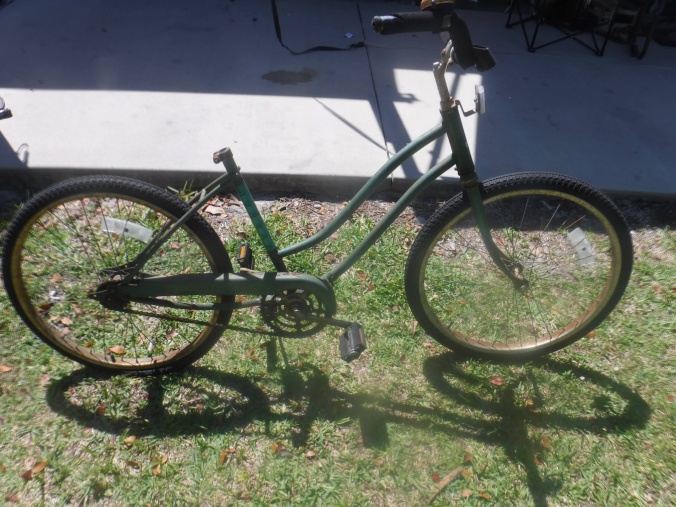 It was missing a seat, had a flat rear tire, had rust everywhere and the bearings felt gummed up, but the rust was mostly surface corrosion, I pulled a new looking seat off of one of the other bikes, and figured this would be a great fixer upper project while in Key West.

OK, so yeah, I never got around to working on it during our eleven weeks in The Keys, but once we moved into lock down mode here in Sanibel, it seemed like the ideal time to work on it.  The plan?  Take every single thing apart I can, take it down to bare metal, clean out all the bearings, repack them with grease, and repaint all the previously painted pieces.  Easy peasy.

This looks bad, but it was all just surface rust and came off quite easily with my wire wheel

So it turns out that despite this being an incredibly basic bicycle using, what, maybe 1920’s technology, it still has a surprising number of parts, particularly within the rear wheel hub, pedal crank hub, and handlebar stem.  Oh, and you ought to have a special tool to two for certain parts.

This is most of the rear wheel bearing components: on my finger is the brake, the three brake pads are on top of the leaf, you can spot two of the three bearing cages, the clutch just in front of the log, and various other nuts, washers, and setting pieces are also in the background.

Seriously, this incredibly basic machine has nine bearing cages, plus the bearing cups and races, an in hub clutch, and a brake assembly with three brake pads.  I was so concerned about getting them back together properly that I took close up “before disassembly” photos, and kept all the parts together in a plastic bag and on a zip tie in the proper order and facing the right direction.

None of this would have been possible without YouTube and some other internet sites, though finding them was made a bit more challenging by my lack of knowledge regarding proper terminology.  For instance, the big clunky metal piece that the pedals attach to on this type of bike is called a “one-piece crank.”  I learned how to remove, clean, pack with grease, and reassemble it all from these two explanatory videos.

You remove it from the left side, which is counter threaded (lefty tighty, righty loosey).  Under the locking nut and set washer is a “cone” that would be far easier to work with if you have something called a “cone wrench.”  I did not have one of those and had to use pliers and swear words instead.

Aside from learning how to do any of this, the hardest part for both the crank hub and rear wheel hub is getting the cones adjusted such that there is just the tiniest bit of play and no bearing friction.  Again, the cone wrench would have made that a lot easier.  Aside from YouTube, this text and picture explanation got me through the rear wheel hub rebuild.

The handlebars themselves were protected by black foam for apparently their entire lifecycle, but the stem needed the wire wheel.

I used a wire wheel on my power drill to take all the painted parts down to bare metal and get all the surface rust off the unpainted parts as well.  Since I don’t have a real work bench or a big vice, much less a proper bicycle repair stand, this was a real pain because to properly use the wire wheel you really need both hands involved so you can not only control the drill but also apply pressure.  Without a stand or vice I had to improvise so that I could hold the bike part in place while still getting some serious grind out of the drill and wheel. 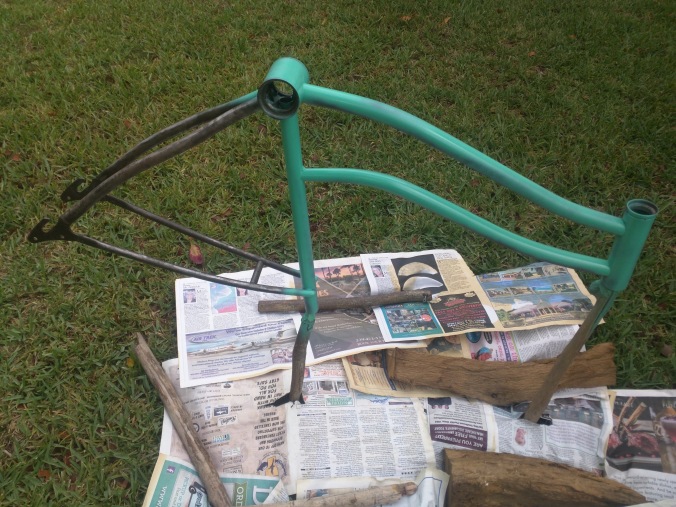 My rigged up paint stand: two sticks pounded into the ground.

I found the “sea glass” exterior, suitable for metal spray paint on Amazon, an got the white paint from Ace.   We chose to paint all the parts that were previously painted with the sea glass, and all the bare metal parts that had lost their anti-corrosion properties with the white.  Much of the bare metal handlebar stem pieces I thought might be able to withstand some time unpainted since what I removed with the wire wheel was just surface rust, but one weekend of rain proved me wrong and we ended up painting it all white as well.

Once reassembled we got the seat and handlebar heights adjusted, and Rose is off and running on her sort of like new bike.  Total investment was less than $30:

The only thing I regret is not doing the wheel spokes.  We couldn’t find my Dremel, and the wire wheel was way to bulky to get in between them, and my long term plan was just to look out for aluminum or painted wheels in decent shape down the road.  Now that we have located the Dremel, I might take a run at them while we are still here in Sanibel.