I place March 12th as the day Florida started taking SARS-Coronavirus-2 and the resulting disease, COVID-19, seriously.  Not everyone, and not the whole of government (e.g., Governor DeSantis did not close Florida beaches until late March and did not issue a self isolate/stay at home order for non essential personnel until April 1) but things definitely shifted that weekend. 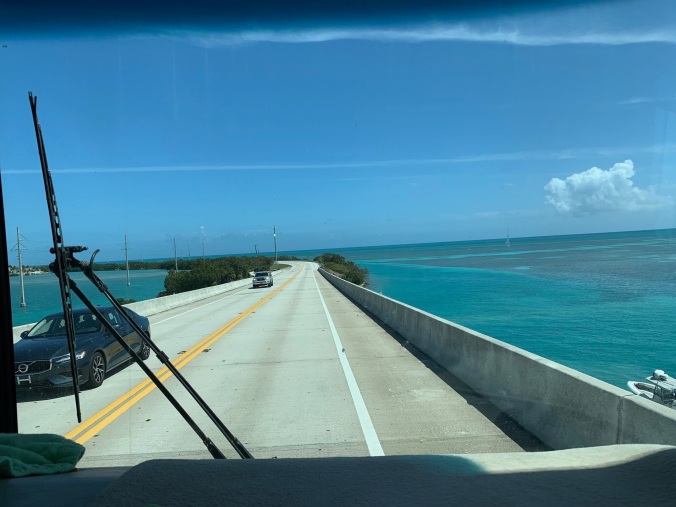 We stopped for the day and a one night stay at our friends the Nieves, where we learned that eldest daughter Antonella’s Future Business Leaders state-wide convention in Orlando was cancelled that very morning as she was preparing to go to the bus pick up point.  Later that day all of the girls’ public schools announced they were closing until further notice.  Granted, this was in Miami-Dade County, which, along with Broward, were rapidly becoming the top infected counties in the state.

We always enjoy our short stays with the Nieves clan, spending the afternoon and evening telling stories, watching videos (yes, more TikTok, but also some YouTubers they follow) and playing games.  The girls loved that we had a ladder mounted to the back of the motorhome allowing them access to the roof.

The girls on the roof, from left to right, Antonella, Evangaline, Jascinda (Kai)

We only stayed one night since, despite signs that we should reconsider, we were still slated to participate in a big craft show at Koreshan State Park on the Gulf Coast.  This was in the early stages when some were theorizing that Florida’s higher temps and sunlight might strongly reduce transmission of the virus, and sure enough that was the explicitly stated reason I was told for keeping the show going when I reached out to the organizers.

A note from Kai she left on our motorhome door.

So late morning that Friday we headed across the state, taking the very scenic Tamiami Trail (US-41).  If you are crossing the southern portion of Florida, and US-41 would not add too much time compared to taking Alligator Alley (I-75) then I highly recommend it.  Granted, it is one lane each way, but there are passing lanes along the route, much lower traffic density, and you will see far more wildlife. 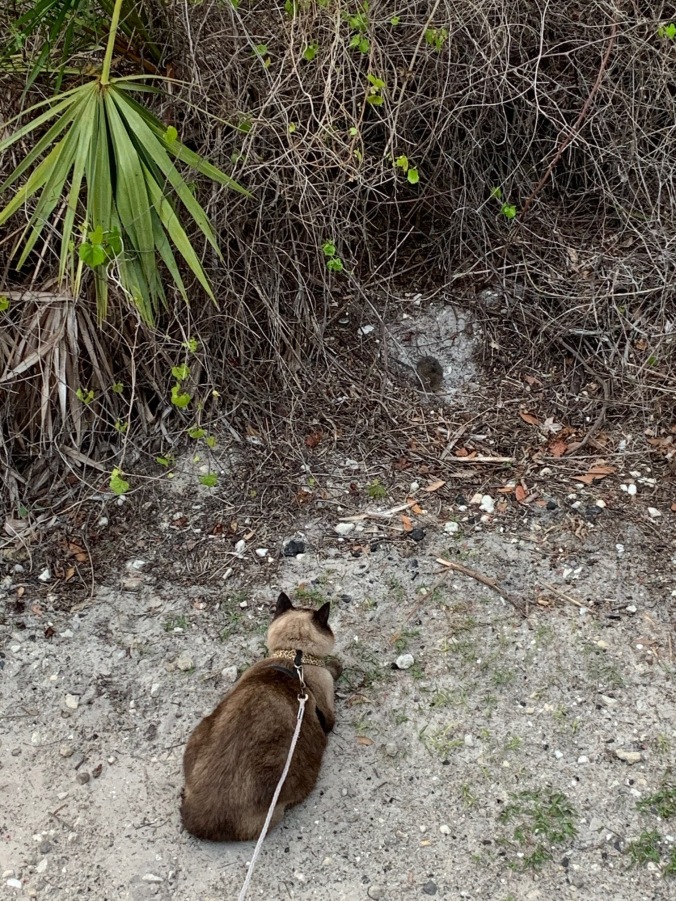 The small furry thing a couple of feet in front of the cat is a cotton rat.

We were headed to Estero, the town nearest Koreshan SP, without having campground reservations anywhere.  I had been working our “check online every day for cancellations” method for openings at the state park itself, with back up calls put in to some quite pricey local private parks in case nothing opened up.  Nothing opened up.  Fortunately Rosemarie remembered reading something about Koreshan sites being held back just for vendors.  I thought it a long shot this late in the game, but I sent off an email the night before our arrival, and sure enough by morning we had confirmation of a reserved vendor site back from the organizers. 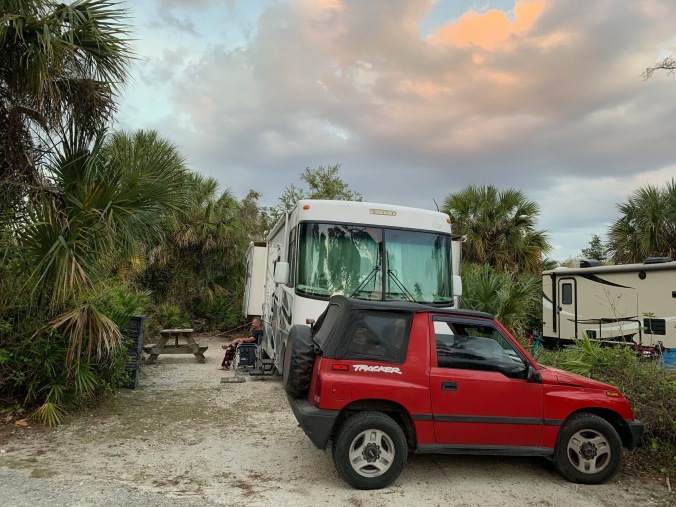 Our site at Kereshan State Park: just how we like it, lots of green.

And not only that: upon arrival we learned the site was free!  The entire cost had been picked up by the Friends of Koreshan State Park association.  There would later be some confusion as to whether we were supposed to have gotten the site for free as it may have been intended only for the antique engine display and demo groups rather than all vendors, so we may have gotten lucky.  So, we are all set, just getting ready to load up the car in preparation for the start of the two day festival the next morning, when we get a knock on our door; one of the park rangers was informing all the vendors in the campground that the entire event was cancelled.

Yeah, PKM wanted no part of whatever that thing is.

That was March 13th, so you can see why I picked that weekend as the period when at least part of the state started taking things serious.  Toilet paper hoarding had already gone into high gear, for example.  While chatting with our campground neighbor (from a distance, through a tree line) we mentioned that we would be on the look out for some since we were caught short, and he immediately went to his truck and brought us four rolls!  He said he, his husband, and their kids were fully stocked, and would not take no for an answer.  Thanks, kind strangers! 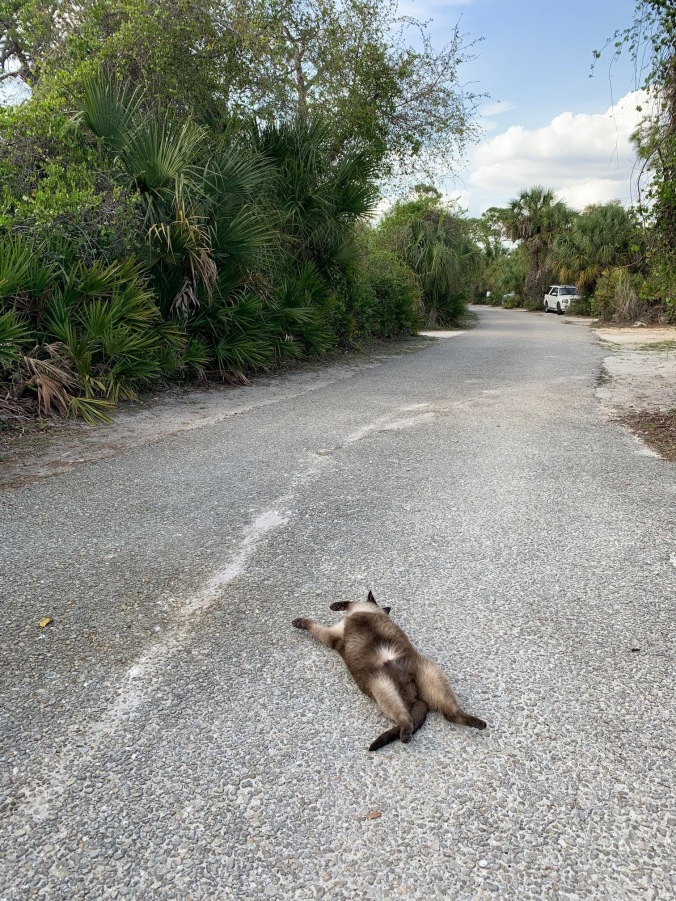 We still had three full days in the park, and then extended for a fourth, the max number of days set aside for vendor sites, and started this whole social distancing thing.  We did not crack down as hard as we are doing now, but we cut back on our outings and tried hard to keep our distance from any other human.  There are nice bike and hiking trails throughout the park, and though it was oppressively hot during the day, in the evening we would frequently take a ride or walk to the river marina or other areas looking out for wildlife.

We even took a day trip to nearby Sanibel, one of our favorite places, to spend a few hours on one of the beaches for some shelling.  We had a decent haul from our go to beach, a section on the north portion of the island that requires a good full mile hike each way, meaning we usually have it almost to ourselves.  We were stunned to see large schools of stingrays transiting up and down the coast very close to shore.  We spotted four schools, the biggest looked to have around 200 rays!  We ended the day with ice cream at Rose’s preferred place, Loveboat.  That was the the last place we have eaten out. 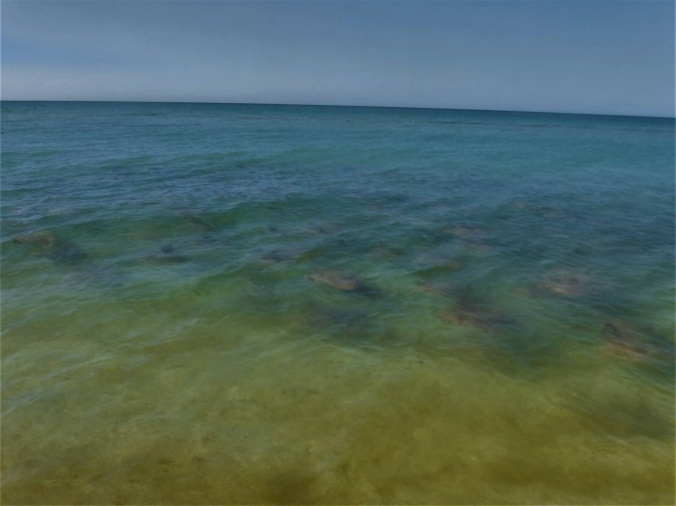 My one complaint about Sanibel is that the water is rarely clear.  Those brown spots are all stingrays about 10′ off shore.

Next up: three days in Venice, four in our mechanics parking lot.

4 thoughts on “Departing Key West as COVID-19 Ramps Up”