This post covers the first eleven days of March, 2020, a period that saw confirmed US coronavirus cases jump from 75 to 1301, marking the beginning of exponential growth.  Thus, the activities documented here look, in retrospect, more than a little foolish.  I can only say that at the time there were no known cases in Key West, and no government executive at any level, Key West, Lee County, Florida State or Federal, was yet to advise us to self isolate.  That would come almost immediately after we left The Keys. 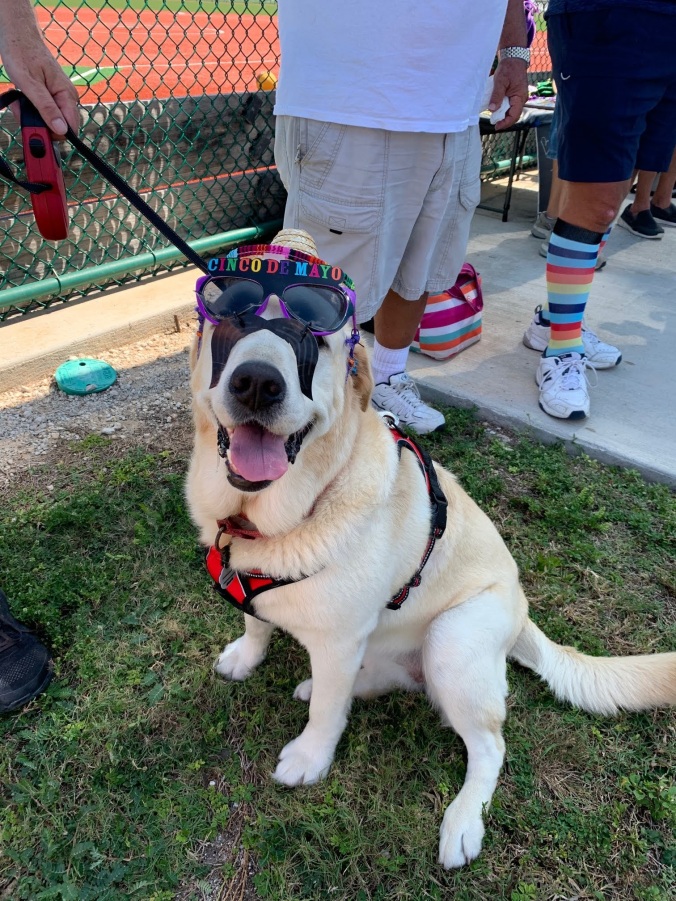 This will be explained later.

With our time in Key West nearly over, we focused on two things: Cinco de Marcho and as many of our favorite restaurants as we could pack in before we departed.  Cinco de March is a made up Sigsbee Campground holiday that has evolved from a single location all day party three years ago to the movable feast type event it is today.  It is intended to celebrate all the holidays that we will not spend with our Key West friends.  A handful of teams volunteer to host as party stop.  Each host team provides drinks and refreshments and coordinates holiday specific decor.

Most of Our Team: Rebecca, me, Charlie, Joann, David, Julie, Andrea, and Rose.

Eddie and Tina start the event off at the base baseball field for some speechifying, drinks, and the awarding of the Brian “Big Mexican” Pedraza Memorial Camper of the Year.  Brian, a big-hearted icon of the Sigsbee crowd died unexpectedly two years ago, so we have this award to honor his spirit.  Last year Eddie and Tina were the overwhelming consensus winners, and they organized the “on the down low voting” for this year’s winners, Sandra and Bob.

Bob and Sandra, Campers of the Year.

We have a toast in honor of Brian, take a group shot with our Oklahoma Drone (Eddie on top of the dugout roof) and then drive our decorated bikes and golf carts to the first host’s campsite.  The event continues to evolve: last year Eddie and Tina made sure every host had a different theme; this year he let each group do whatever they wanted.  Thus we had two Easter and two St Patrick’s Day sites, in addition to our group’s Cinco de Mayo themed stop.

Last year, I say with no humility, we set the standard for hosting with our “walking tacos” (Dorito or Frito individual bags that you then top off with traditional taco ingredients and eat with a fork) and buckets of margaritas.  It was such a hit that we had plenty of volunteers for our team this year, and we went with the same menu, though with a better understanding of how much we would need to host up to 150 people.

Most of the Walking Taco supplies.  Andrea added fresh made guac, but the rest of this came from Gordon’s Food Service, a really helpful place for this event. Next year, unless the numbers grown, only one tub of sour cream and one giant bag of shredded cheese will be needed.

Rose made another Dia de los Mortos themed picture frame that was quite a hit for photos.  Having absorbed more of the cost than we expected last yeardue to confusion over the placement of the donation box, we made sure to have one out this year to help defray some of the expenditures.  Our team had a wonderful assembly line system to speed the feeding process and control the portion size of our one “not sure we have enough” ingredient, the taco meat.   Man it was great, we couldn’t have asked for a better team or event.

Edith and Jim.  Jim has the tandem hobie kayak with a sail that Rose and I occasionally go out on with him.

I think we were the third stop once the group left the kick off point, and we were the only ones providing substantial food rather than light snacks, so by the time we finished out the remainder of the hosts, people were hungry again.  The closing ceremonies included a pot luck/delivery pizza feast for all.  What a fantastic event, what a party. 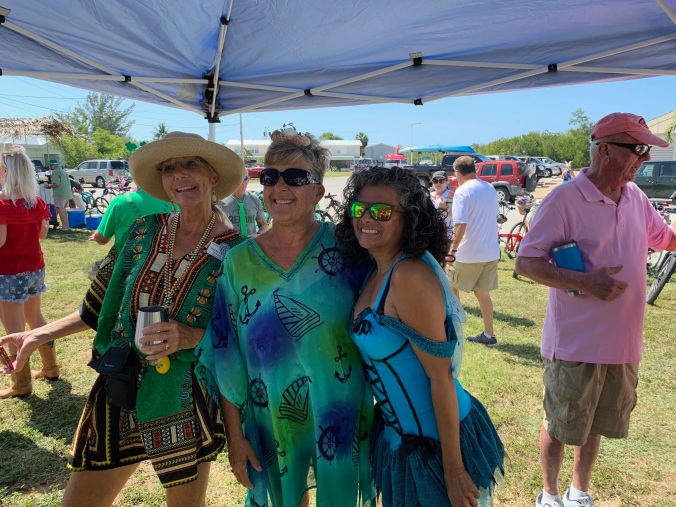 Our loose planning for the season had all along been to stay for Cinco de Marcho and leave two days later, when we would be ostensibly recovered.  But it just felt too soon, there seemed like so much left to do and prepare, so we extended a few days and then a few more, staying around through March 11th.

Our final full hook up site of the season.  We actually had to shift back to dry camp the morning of Cinco de March, which made the day a bit more complicated.

In addition to getting Serenity and all our belongings ready for the road, we used much of this time to give one final visit to various restaurants and establishments that we love, and perhaps hit a couple of highly recommended new ones.

I had been wanting to try Tavern & Town, an upscale surf and turf place in the Marriott hotel ever since learning that they would honor a “locals” rate for us seasonal military people, meaning any entree would be $20.  We coordinated an outing with Steve, Deb, Dennis and Ginger.  For health reasons Dennis and Ginger did not arrive in Key West until late February, so we tried to include them as much as we could since we had limited time to hang out with them.  I had an excellent aged steak that normally went for $42.  Steve concluded that though his fish was good, the steak was the better option. 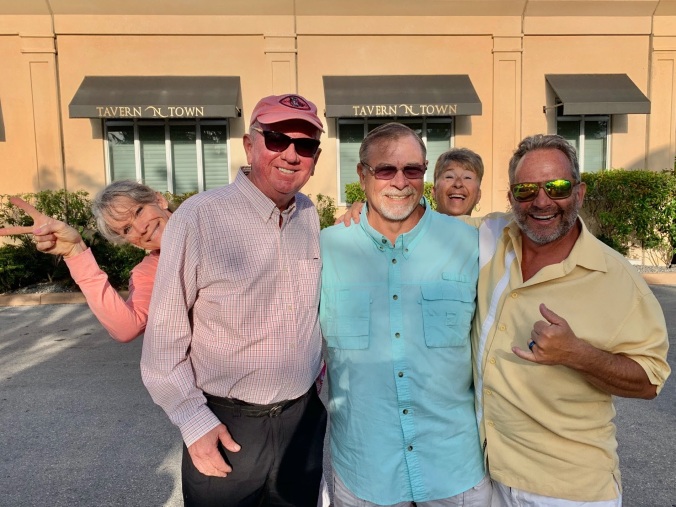 Dennis, Steve, and I with Ginger and Deb photobomming.

On the advice of friends we hit Salute On The Beach for an evening dinner.  It is on the Atlantic side away from the main tourist area, and was quite nice, both in terms of views and food.  We all agreed that Deb’s shrimp pasta was the best choice (specifically Ditalini and Cheese with sautéed Key West Shrimp, the Chef’s special) but I was quite happy with my white wine, garlic, and lemon steamed mussels, a hefty appetizer that served as my meal. 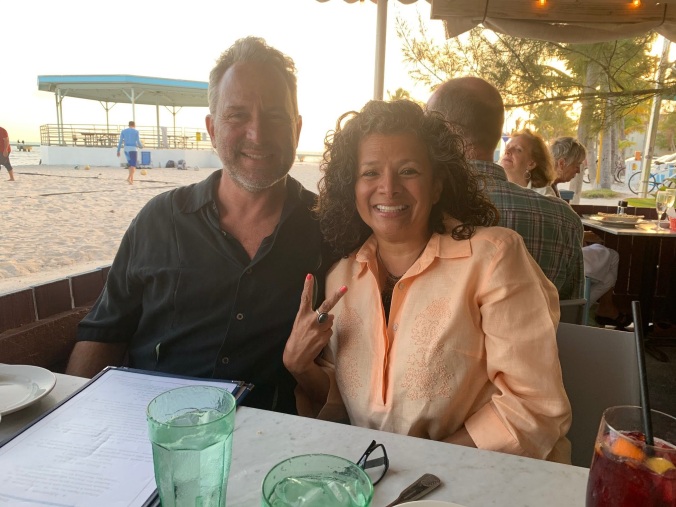 Somehow we had let almost the entire season go by without hitting up our previously favorite happy hour spot, The Boathouse (which has been pushed to #2 this year by Pepe’s.)  You have to get there early if you don’t want to wait forever for a seat, even if there are only two of you.  Rose and I got there at about 4;15 and it was still a 30 minute wait.  They put us at a table for four, so we were able to invite Rob and Julie to join us, who had arrived a bit after us. 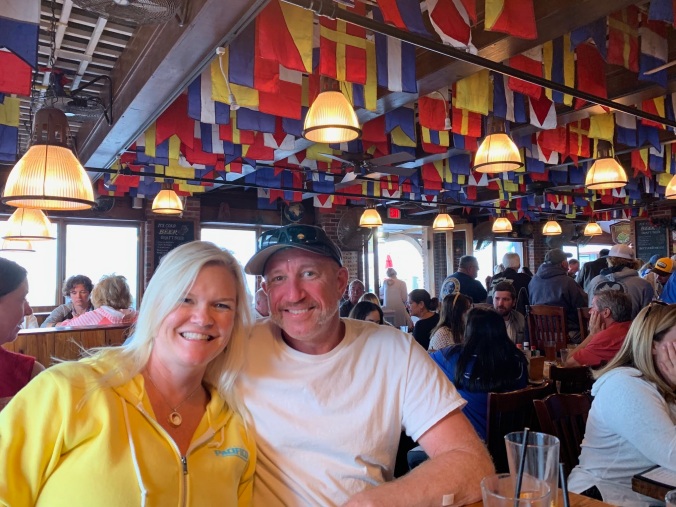 Julie and Rob at The Boathouse.

We took a day trip up to the Big Pine Key Nautical Flea Market one afternoon, and came back with two hats, some tools, and a palate satisfied by fantastically good, though very sweet, mini donuts served fresh out of the fryer.

And of course, we did one final Taco Tuesday with the Sigsbee gang.  I was shocked to see that despite many people having already begun their journey back home, we had the biggest Sigsbee crowd I can recall from any Taco Tuesday event.  Yeah, we overwhelmed the wait staff, so there was some confusion and extra wait time, but it was a great evening.

We closed out the evening with a stroll to Mallory Square for the traditional sunset viewing.  If you have not been, it is quite a festive atmosphere with lots of street performers and vendors.

That’s it, next post we leave Key West and start taking the the coronavirus pandemic seriously.

Spotted near the Publix on Big Pine Key: A deericorn.

Join 145 other subscribers
Follow Shell On Wheels on WordPress.com