In the summer of 2016 we crossed into Michigan’s UP on the recommendation of an instagram person we have never met, and settled into the county owned campground in Grand Marais.  Veteran’s in our second full time year on the road, we had slowed our pace of travel from a bit less than three day stays to around four, but the beauty, wonder, and people of the UP, Grand Marais, and Woodland Park caused us to pause our incessant wandering for a full 26 days.  This place was, in short, the trifecta: we loved the region, the town, and the campground. 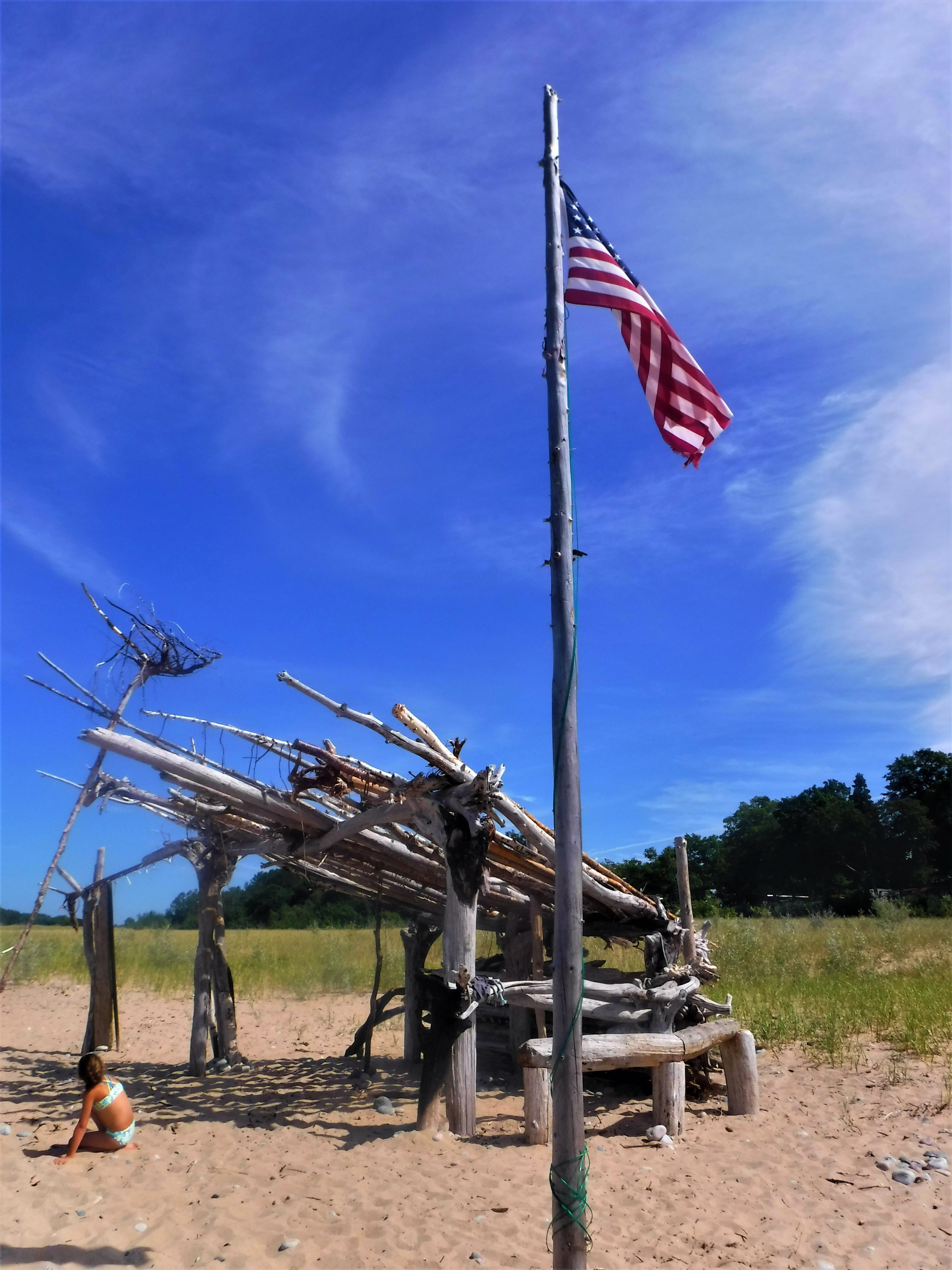 One of several makeshift structures beach goers constructed from wood washed up on the shore near the campground.

In addition to our nearly three weeks in Grand Marais, we stayed three days in Big Bay before crossing the Wisconsin border for an eight day stop in Ashland-Washburn.  I think it bears mentioning that culturally, the UP is closer to Wisconsin than Lower Michigan, so while we only stayed 29 days in the actual UP, we stayed 37 in the Lake Superior region.

See that splash? I’m under there.  This lake is cold, even in summer, I can assure you.

The next year we approached from the west and made the UP our last stop before turning south.  Delays in getting repair parts for extended warranty work pushed our stay out to 40 days as we split time between Grand Marais, Munising, and a few parking lot nights at a casino and shopping plaza as well.

The colorful rocks along Lake Superior

In 2018 we reentered the US in the UP, at Sault Ste Marie, after our trip through Eastern Canada.  While we spent most of our 30 days in Grand Marais again, we enjoyed three days in “The Soo” and five in the Marquette Tourist Park campground as well.

Kitty believes that four paragraphs is far to much history; just get to the point.

All of that history should make it clear how much we enjoy this region in general and Grand Marais in particular.  When we arrived this year we left it open ended as to how long we would stay, but since a water front site was immediately available, we locked in a full week to get the minor weekly discount.

Our site in Woodland Park Campground.

Like last year, we arrived in advance of Grand Marais’ annual music festival when the town really fills up.  Though we were not official vendors at the festival itself, we had high hopes that we would benefit financially at the weekly markets downtown and at the local mercantile co-op like we had last year.  Unfortunately the co-op event is on extended hold pending some insurance issues, and the downtown market provided very modest success. 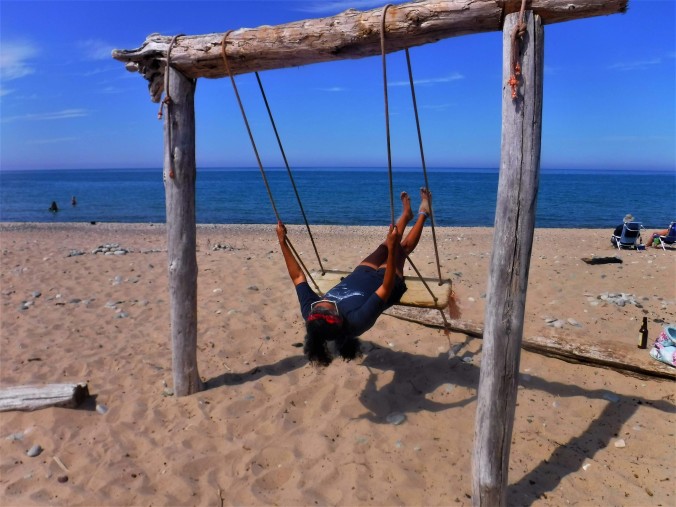 Rose on another one of the makeshift beach structures.

Ah well, that just meant we had less work to do while in Grand Marais and could just enjoy the town and the local area.  After three consecutive years of coming here we have eaten at every restaurant and drank at every bar, so this year we could focus on those we enjoyed most.  We had our flight of beer and some wings at Lake Superior Brewing, but spent a lot more time and money at the Grand Marais Tavern across the street.  We also had one of the best breakfast sandwich we have ever tasted at the Fired U.P. food truck.  You owe it to yourself to start your day with one should you visit.

We also ventured out a lot further than we did during previous years, letting our Geocaching hobby define a lot of our routes.  One trip we stumbled across a dozen people picking what we thought were wild blue berries, so I dropped Rose off to gather up a pint while I went off to find the cache.  These would turn out to be huckleberries, not blue berries, but they were still delicious. 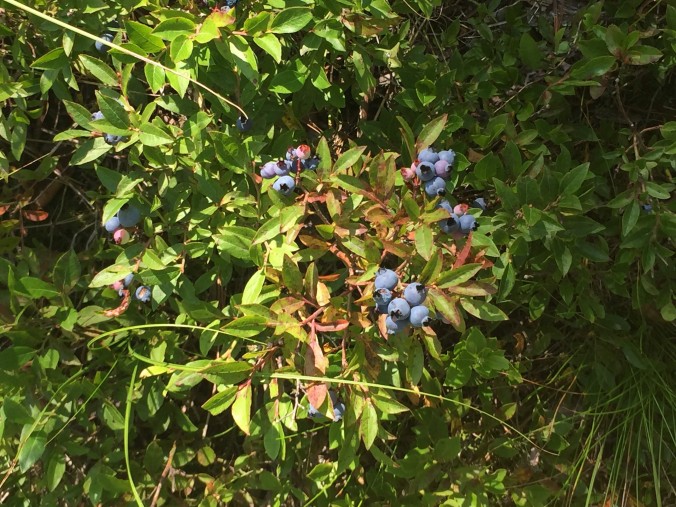 Another day trip we headed west towards where the Hurricane River flows into Lake Superior to do three “Earth Caches” focusing on the geology of the region.  We enjoyed the beauty of the setting and a two mile round trip light hike to the lighthouse and back.

We also headed east along the coast and endured a good amount of dusty and bumpy roads and absolutely zero phone service so I could not even download the caches in the area.  That was a lesson learned: download them before you leave reception area.  We visited lighthouses, national park service visitors centers, waterfalls, and a pretty stunning area of very steep sand dunes running straight into Lake Superior that had historically been used as a logging shoot.

In four years of ownership I have not put Loki into four wheel drive mode since the day we bought him, but having found all the near road accessible caches in the area, I went exploring down the many many dirt roads, and two track paths used by the off roaders, side by sides, and ATVs during the summer and the snow mobiles during the winter.  What a blast!  I was really impressed with how well Loki (totally stock, street tires, not lifted) handled off road.

Got into some poison ivy while out in the woods.  This got a lot worse before it got better.  Learned my lesson, I cache in long pants and boots when in the woods now, and keep a better eye out for the bad stuff.

And then there was our market schedule.  Though we did not have the mercantile event and only did one local downtown day, we continued our routine of driving to Marquette and back for two more Saturdays for the big farmers and artisans market there.  Just like our first week this year, we had great success.  Of all the places we have sold, no market provides the consistent return that Marquette does, at least during this peak season and with reasonable weather.

Just another oddity found while caching.

Simply put, we had a lovely time in Grand Marias.  The weather was mostly wonderful, and when it wasn’t we had a cozy home in a beautiful park listening to the rain tap on our roof.  All of that firewood we “mine swept” in Seney came in quite handy during the vaguely chilly evenings (by Florida standards.)

While we love Grand Marais and Woodland Park, the town is tiny, and eventually our wanderlust overcame our enjoyment of staying there, particularly with the decreased market opportunities and the long drive to and from Marquette every Saturday.  So we elected to limit our stay to 15 days this year, and move on to exploring Munising and Marquette from their respective municipal parks.