The Northwestern portion of Nova Scotia is an island separated from the mainland by a short straight, and has it’s own particular personality sometimes distinct from the rest of the province in the same way that Michigan’s Upper Peninsula feels like it’s own state.  We found that in Cape Breton you really get the “Scotia” part of New Scotland.  Whereas in many other parts of Canada you will find road signs in both English and French, in The Cape you see them in English and Gaelic, and traditional Scottish entertainment and music is robustly advertised.

The bridge to Cape Breton.

We spent a few days in Inverness last year, primarily to hunt for the extraordinary amount of sea glass washed ashore on a particular few miles of beach there, but we did little to explore the region beyond that.  This year we booked six days at the same campground, Inverness Beach Village, but vowed to do more than just find glass. 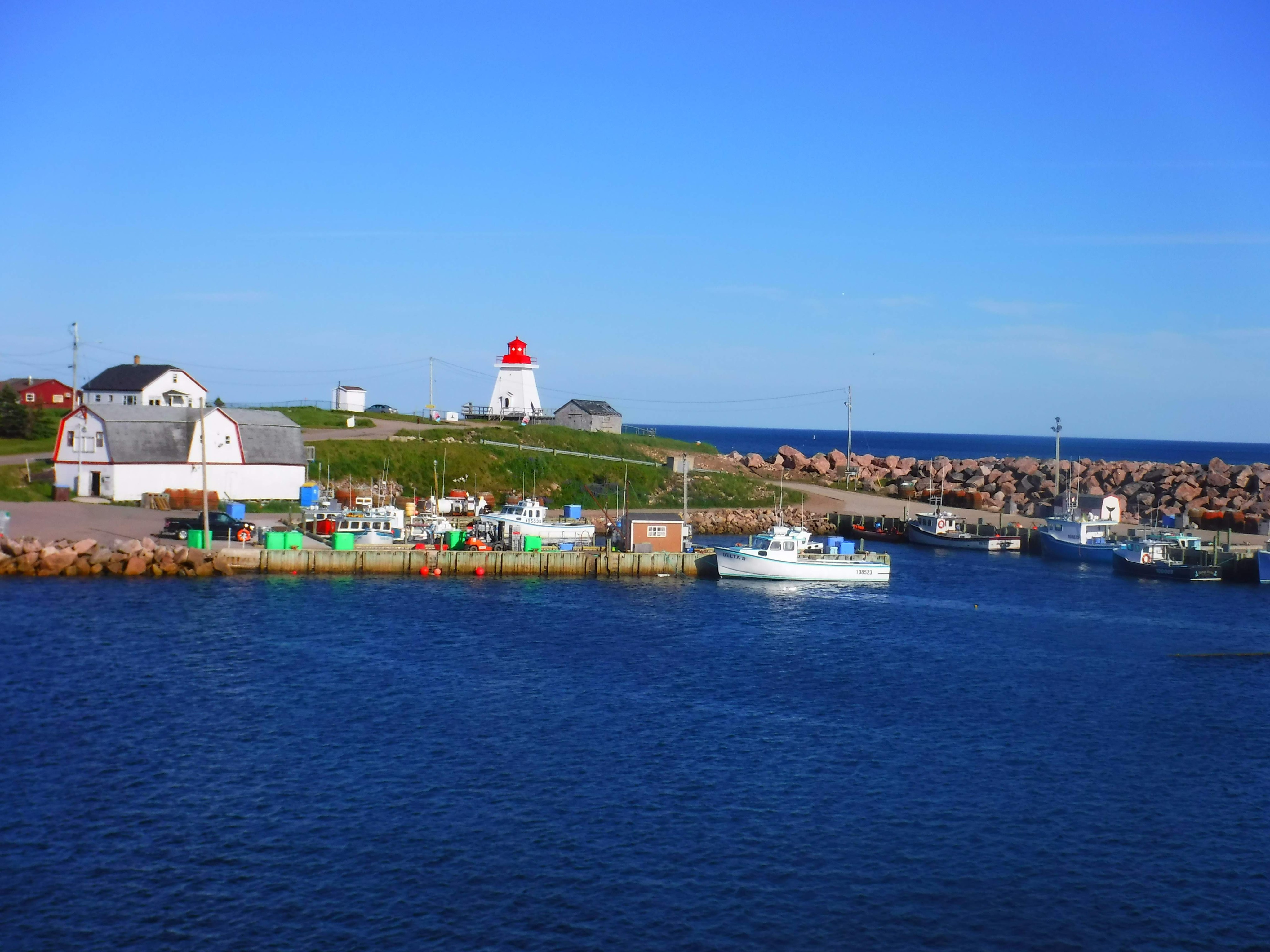 One of many picturesque coastal towns on The Cape.

The campground is nothing special; just a lightly terraced grass field amidst the business’ primary money maker, a bunch of small vacation cottages.  For $38 USD a day you get nothing but a 15 amp standard connection and water.  Fortunately it was not particularly warm during our stay, so no need to blow the circuit breaker attempting to run an AC.  The reason we stay there, as opposed to say, the fully serviced MacLeod’s a few miles up the road, is that Inverness Beach is where all the sea glass comes ashore, and you have direct access to it from the campground.

The evening view from our site at Inverness Beach Village Campground.

And so almost every day of our stay we were down there on the shore, walking a mile or two up the beach gathering pocket fulls of glass, mostly white and green, with an occasional interesting blue.  Our supply of the stuff had diminished greatly due to the amount we sold as pendants at various markets during the past year.  We are pretty well stocked now though! 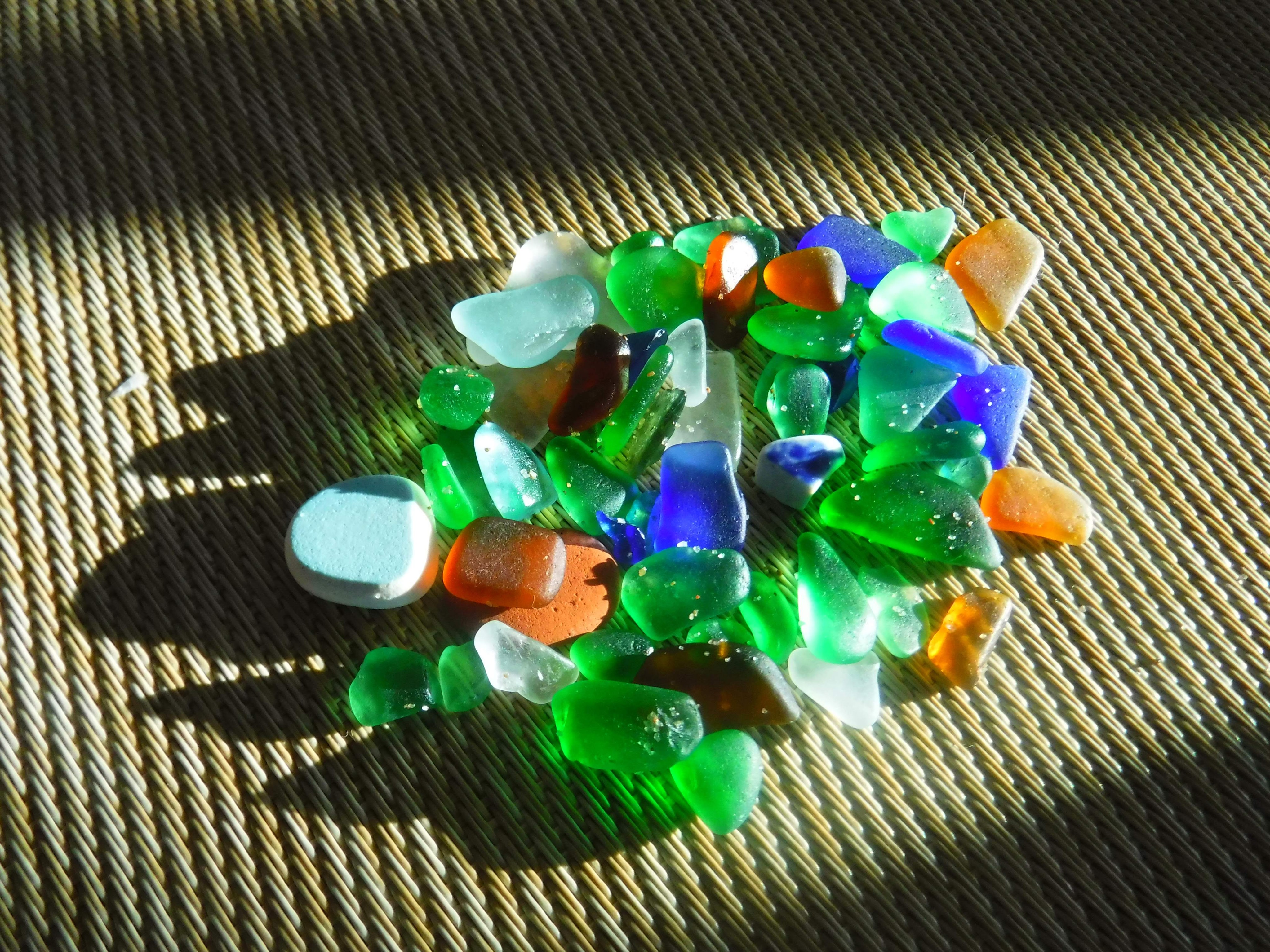 A small part of our haul from the beach.

Just like in Tatamagouche, we located a weekly farmers market, contacted the manager, and were enthusiastically invited to attend as vendors.  We did reasonably well at this short afternoon event, and enjoyed not just our sales, but also, as always, our interaction with the locals and the gift of their recommendations.

Part of our hike along the coast.

As stated earlier, this time we wanted more out of The Cape than just glass.  So we let three things guide us to new experiences: Geocaching, The Good Cheer Trail, and the Cabot Trail, with may overlapping things between them.  On the geocaching front, I or we did a number of them in town, helped revamp an old cache thought lost, and did a bit of off-roading in Loki to get to a few along the ATV trails.

We hiked down this spit to get to a geocache.

The best of them all, however, was a bumpy grind up some very shaky dirt and rock roads, followed by a five mile round trip hike along absolutely stunning ocean side cliffs.  We snagged a few caches along the route, with the turn around point providing us a fantastic remote earth cache where a stream pours into the sea.

Had to jump the creek to get to one of the caches.

Right in Inverness The Good Cheer Trail map led us to the nearly new Route 19 Brewing for a flight and light meal.  During our trip around the Cabot Trail we also hit Big Spruce Brewing Company, whose Kitchen Party Pale Ale is one of my new absolute favorites, though I fear it will be quite difficult to find once out of Nova Scotia.  We stopped into Breton Brewing Company as well, but a recent death had their tasting room closed for a wake, though the were kind enough to offer to stamp our Good Cheer passport book.

I think we had more than one flight here, but the Kitchen Party Pale Ale was the best of the bunch for me.

As for the Cabot Trail: this is a full day affair.  Though the mileage seems like it should only take a few hours, the speed limit is frequently in the 30’s and the number of stops you will want to make along the way will vastly expand the time (so many beautiful vistas, so many cliffs, so many lagoons and bays.)  A significant portion of the drive is through the Cape Breton Highlands National Park, so you will need to purchase a pass at one of the entrances.

One of many bays and beaches easily accessible along the Cabot Trail.

Here is our number one recommendation for doing the Cabot Trail: break it into two parts.  Secure a reservation at one of the many inns or hotels at your route’s half way point.  Take your time exploring the national park, don’t exhaust yourself (like we did) but rather pause for the evening and enjoy a glass of wine and a good meal in an excellent environment.  Wake up refreshed for more stunning views.  We really wish we had heard this advice before our circuit of the trail.

Did I mention that we took the top down for our Cabot Trail drive? We did, and it was fantastic.

Don’t get me wrong, we thoroughly enjoyed the Cabot Trail.  I don’t think the pictures here can really do it justice.  I recommend doing it counterclockwise so that you are always on the outside of the road overlooking the ocean.  Others feel that clockwise is a better option, particularly if you are doing it in one day, because the majority of the spectacular views would then come at the beginning of the trip when you are fresh, rather than the end when you are just ready to get home. 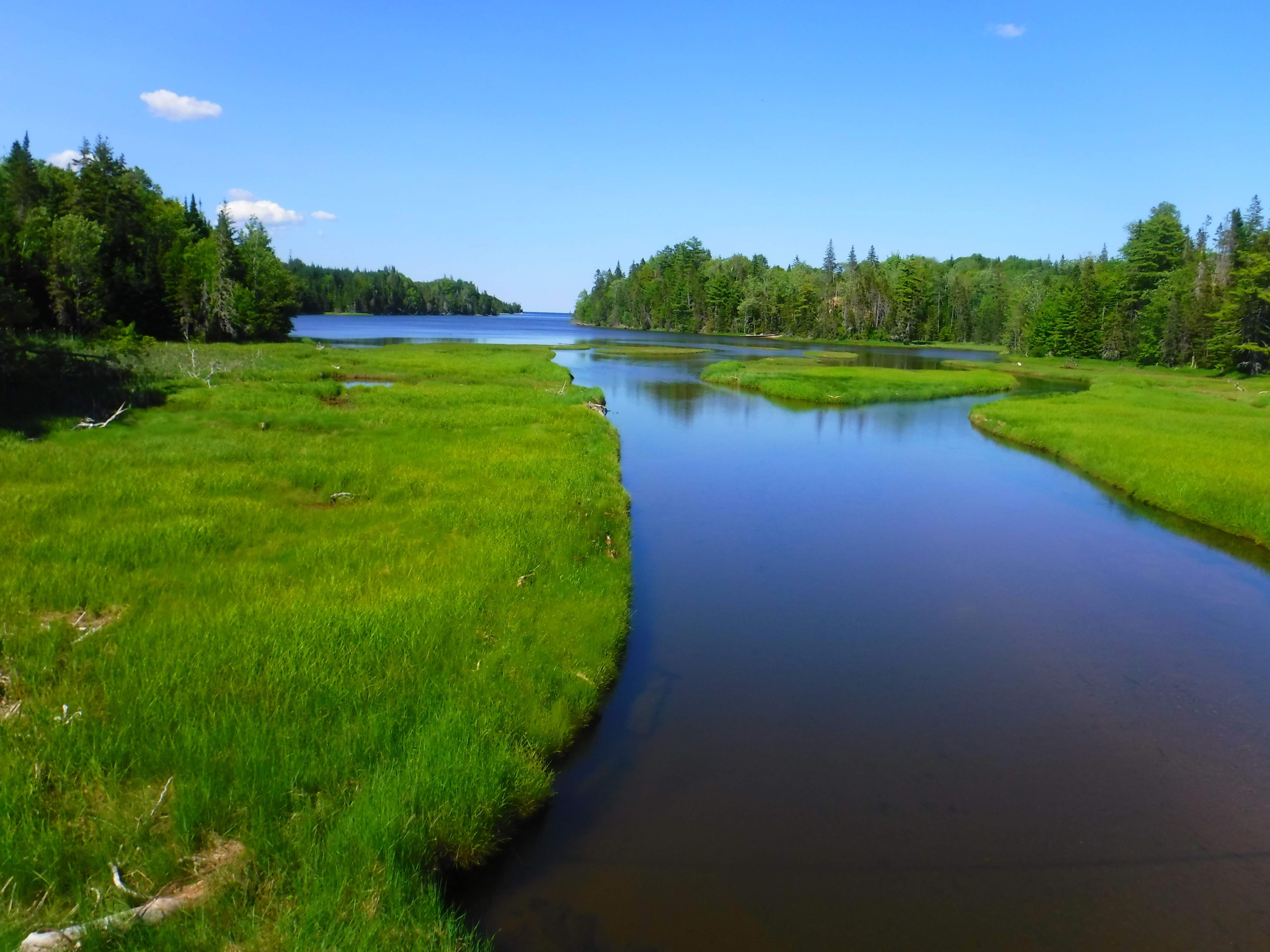 Between our two visits here we don’t feel like we have had the best restaurant experiences in Inverness.  The batter on the fish and chips was a bit thick, the donair just ok, and the service hurried.  But our last full day this trip we stopped into The Cabot Public House and had the best mussels we have ever had.  Served in a Thai sauce with bread, it was fantastic, and a fitting coda to our stay. 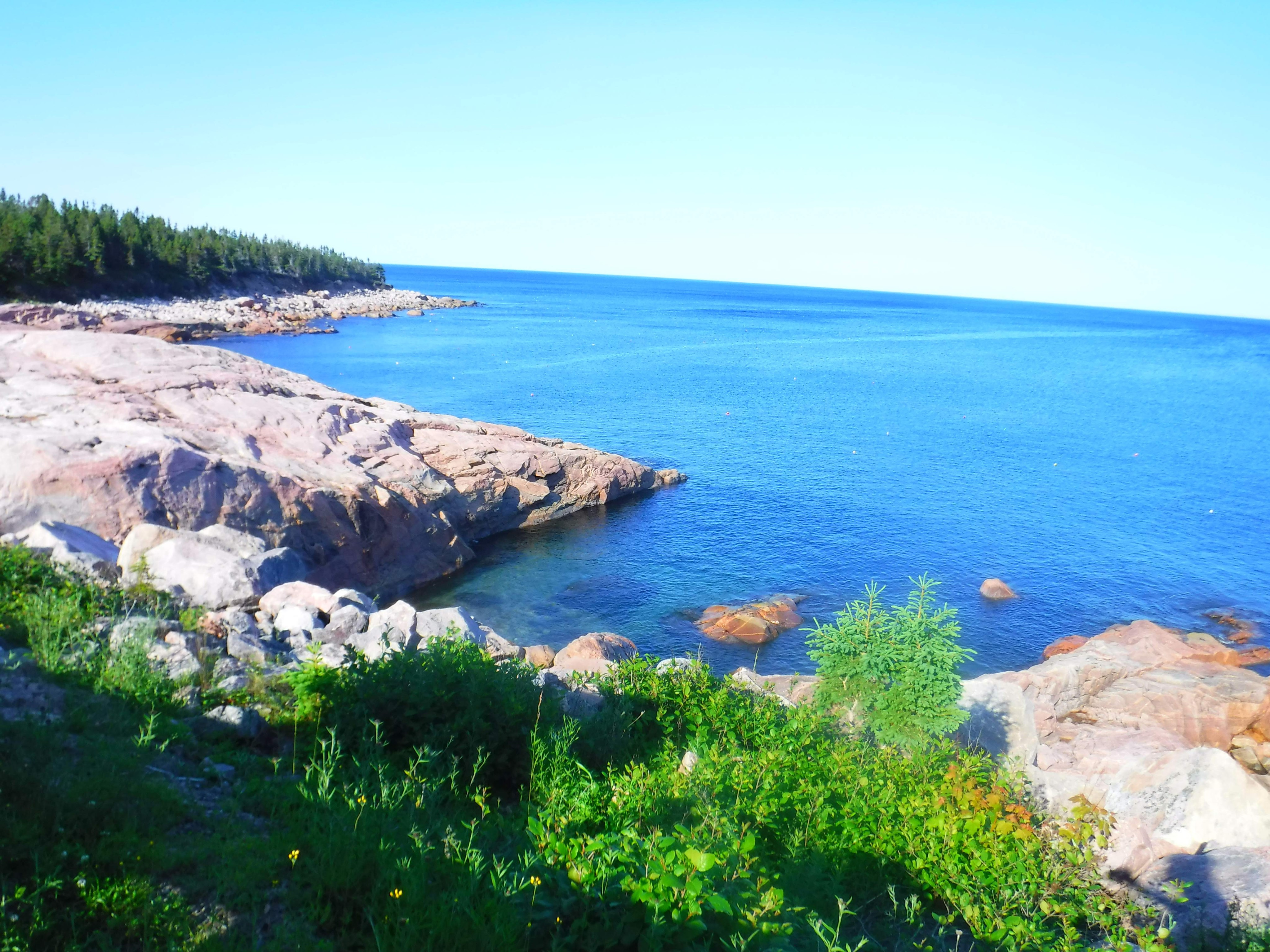 During one of our sea glass walks along the beach we spotted a bald eagle in a tree on the cliff about 40 feet above us.  He let us get quite close, but as luck would have it, neither of us had our phones or a camera.  This is very frustrating since, like 95 percent of the population, we care our phones with us 95 percent of the time.  On a hope and a prayer we decided to go out at the exact same time the next day to the same spot, and sure enough the eagle came back, landed in the same tree, and let us take a few pictures before departing 15 minutes later.  Incidentally, I am willing to return to Canada 100 Canadian geese for each Bald Eagle the send to us. 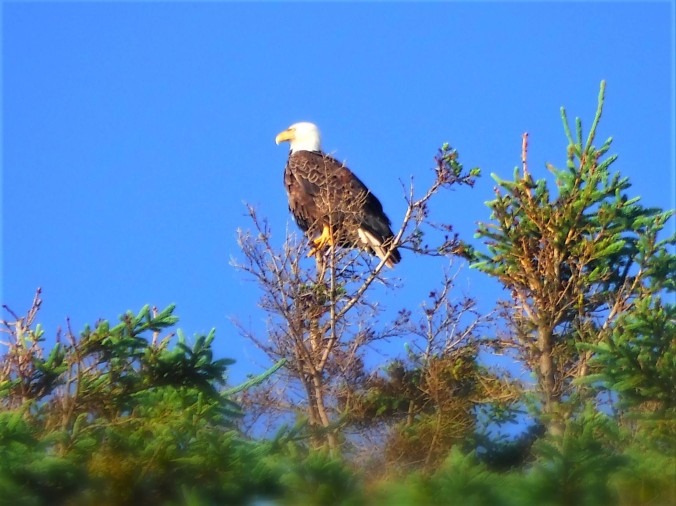 Our sea glass collection restocked, our Good Cheer Trail passport nearing to the point where we get a free t-shirt, and our camera full of great coastline pictures, it was time to leave Cape Breton.  There are areas of Nova Scotia we have yet to explore, but we are quite confident that any future trips to the province must include The Cape. 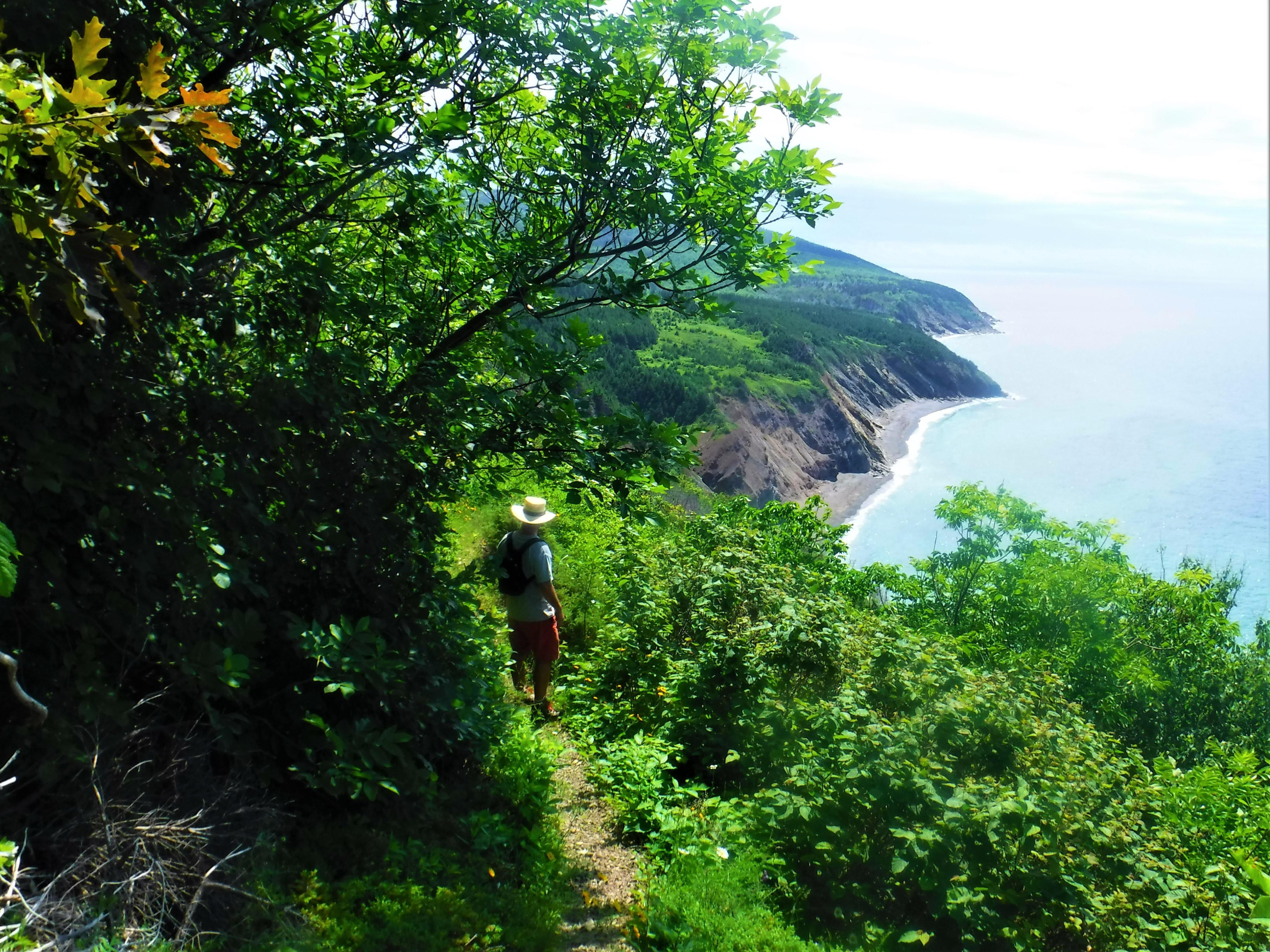 Cliff side, on the way to some geocaches.

Next up: working our way west out of Nova Scotia and through New Brunswick and Quebec.