Last year we started our Canada run with one short stop in New Brunswick, the first province you hit coming out of Maine, followed by two excellent locations in Nova Scotia which we loved enough to make sure they would be on our list of return spots.  Having so thoroughly enjoyed both Tatamagouche and Inverness, we assumed there must be any number of other places in Nova Scotia that would be right for us, and researched accordingly.  One of the top internet recommendations was Kejimkujick National Park, located in a region of NS we had yet to explore.  We put it on our priority list, and based upon our other date specific plans in late June and early July it made sense to hit Keji as our first Canadian destination. 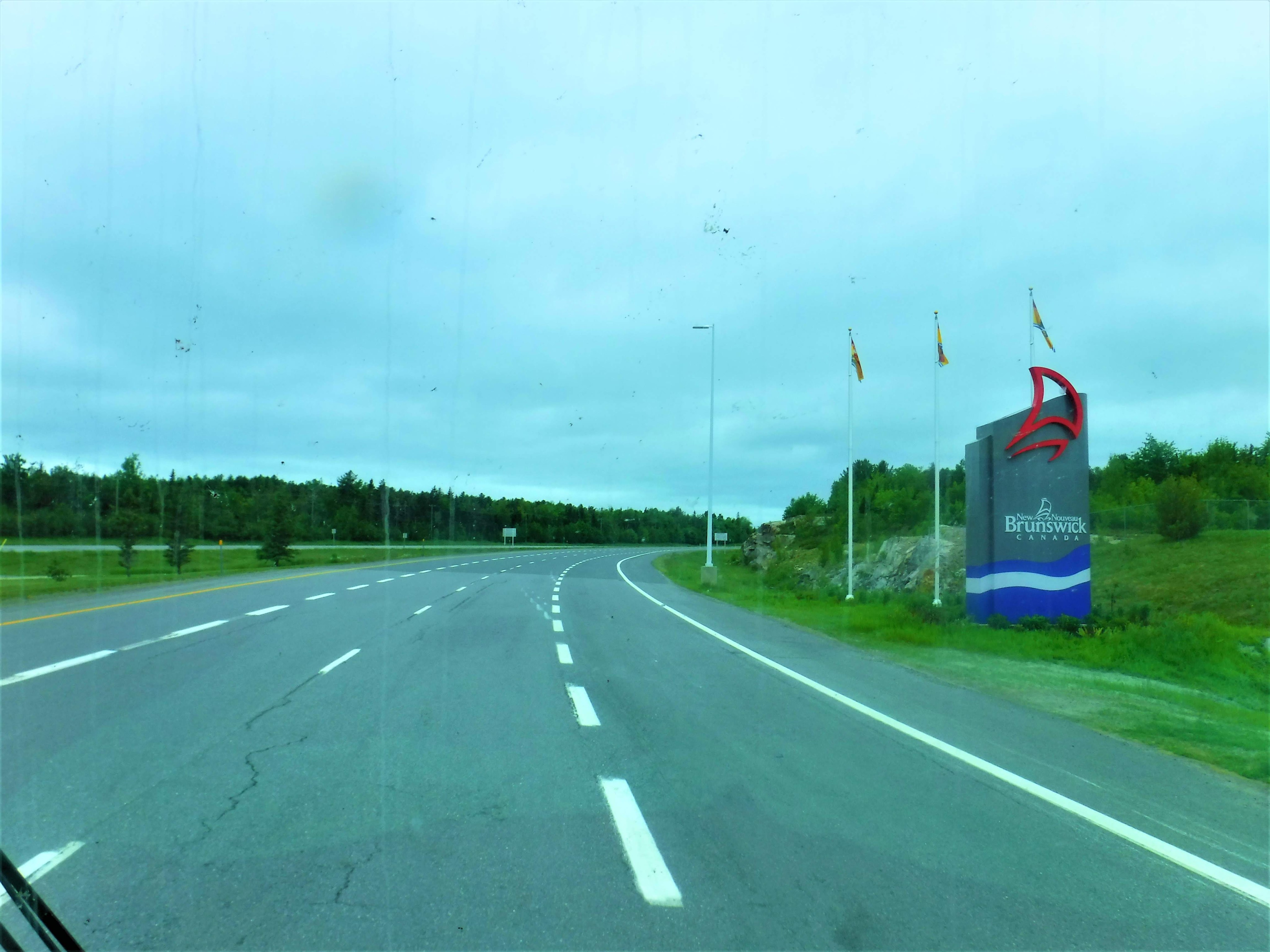 Just cleared at the border.

But we had to get there first, and given our preferred daily drive time in the big RV, we elected to make two consecutive Walmart parking lot overnight stops in route.  I suspect a good number of non-RVers find this concept rather odd, as if we are on the verge of homelessness when parking lot camping, but keep in mind we have our entire home with us.  This means we have our own bathroom and shower, our own fully equipped kitchen, our own bed, and more. 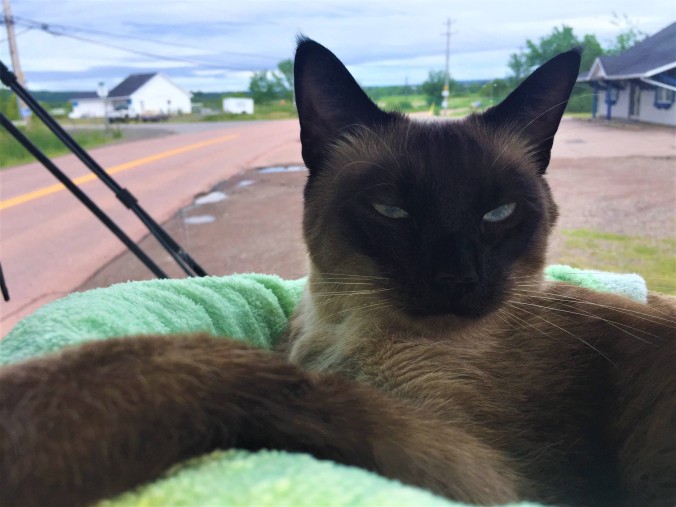 PKM not sure she approves of this Canadian travel.

We have “lot camped” more than a score of times in our 4 1/2 years of RVing, and have never had a problem.  Heck, counting from last year we have stayed in four Canadian Walmarts and that’s with less than two months total in this country.  The All Stays website can be sorted to show only big box parking lots along with which ones allow overnight stays and which do not.  We can pull into a big lot, whether it be Walmart, Home Depot, Cabela’s, or Cracker Barrel (some of the most common establishments that allow overnight RV parking,) position ourselves on the outer boundary, open up slides on the non-parking lot side, run our generator for a bit if needed, and spend an easy and free night.  Many of them are situated close to interstates or other major arteries, so they are often quite convenient. 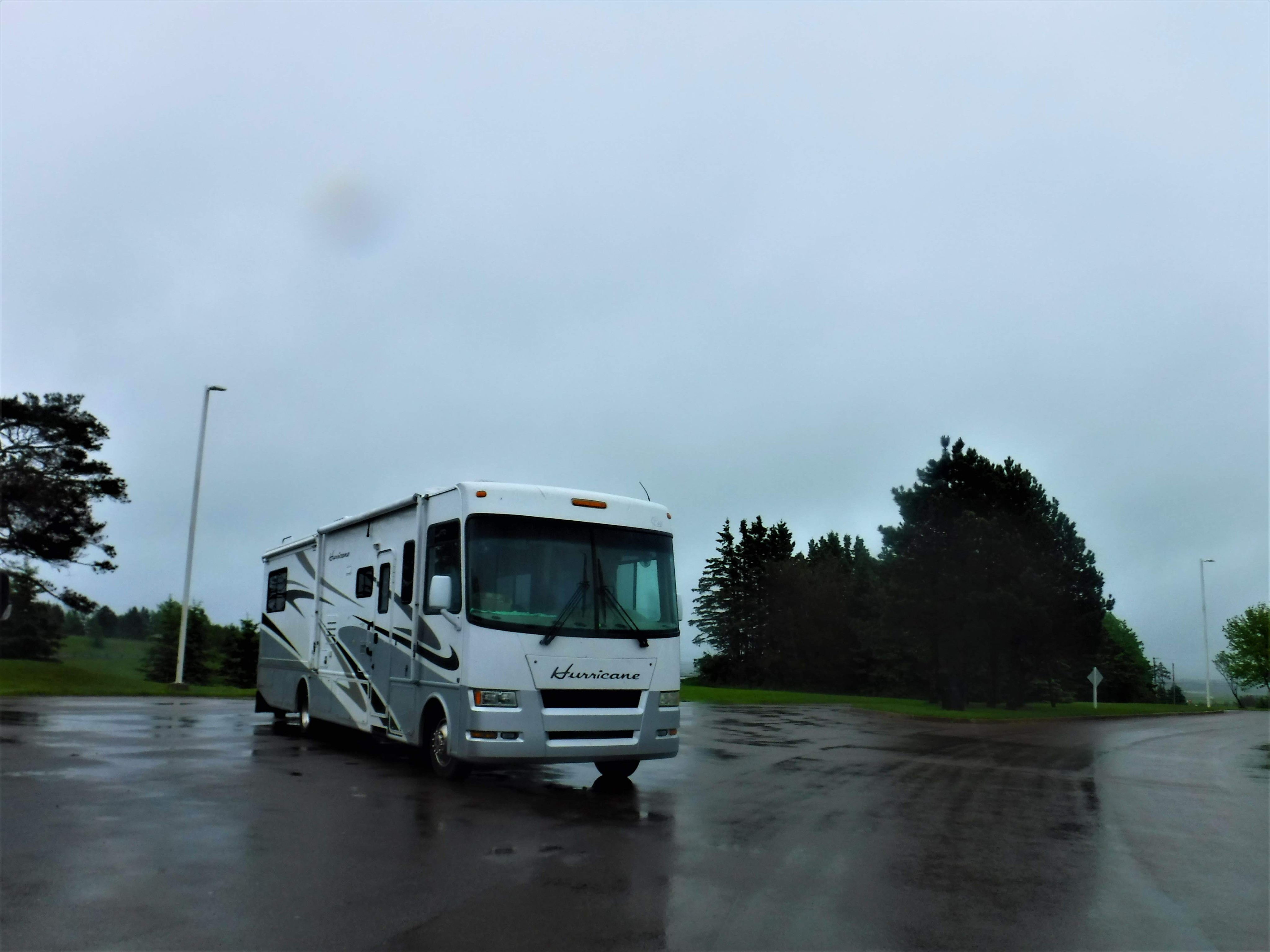 On our route to Nova Scotia we stopped in Sussex, New Brunswick, then Truro, Nova Scotia.  We stocked up on supplies, made a minor repair to Loki (headlight bulb replacement), and spent a lot of time indoors on the laptop or watching downloaded Netflix shows since we had hours of light drizzle and rain for both stops.  During breaks I did some geocaching in both locations, sometimes just to get out of the RV for a bit.

We made the last leg of our run to Kejimkujik having secured a four day reservation at Jeremy’s Bay campground, the only option in the park for RVs.  They have a couple of hundred sites, but only a portion of them are serviced, so you have to pay attention during the reservation process.   Weekends during the summer can be tough, but we kept checking for cancellations and found our four days starting on a Saturday. 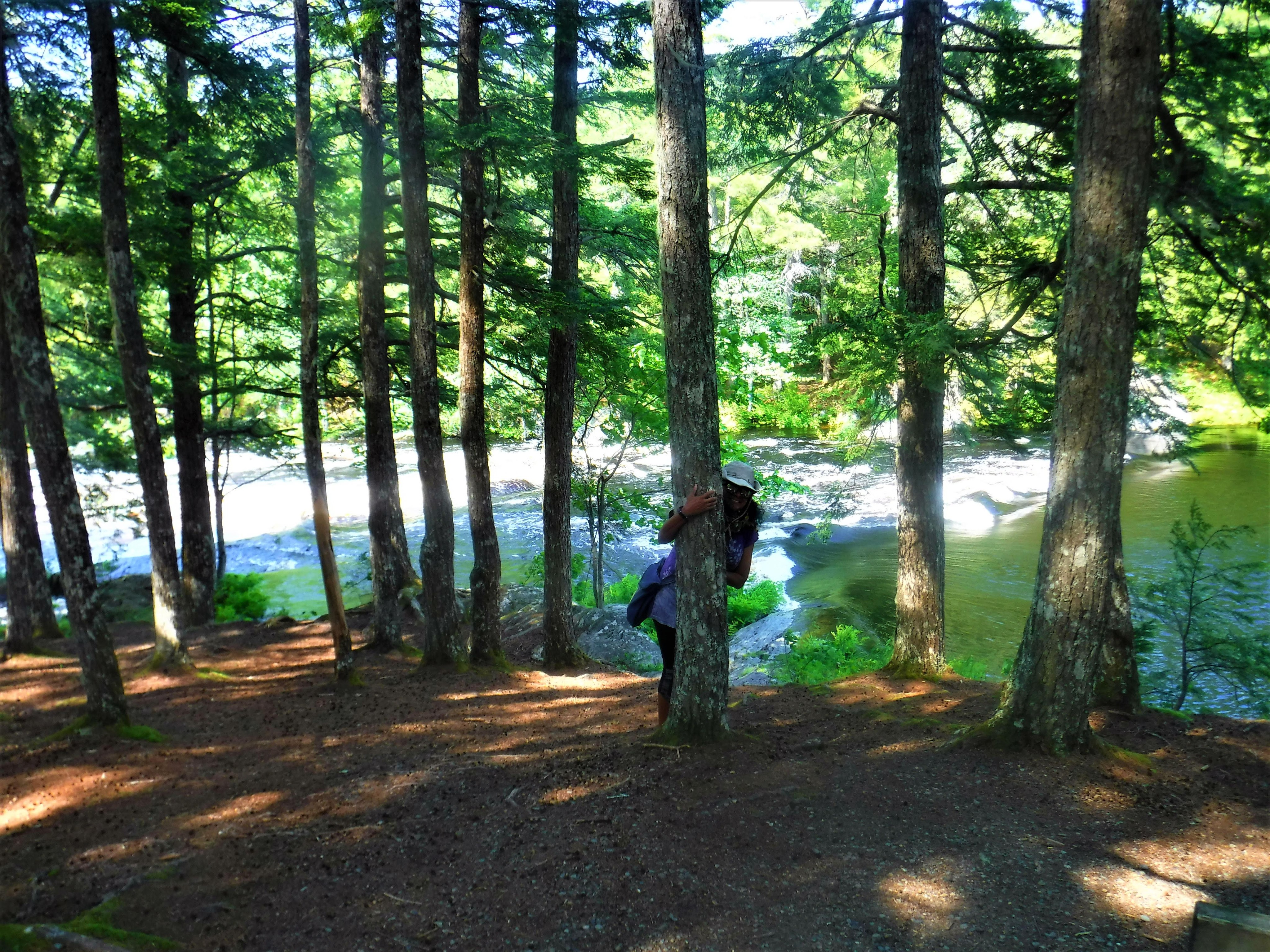 A camping reservation at Canadian National Parks does not include the actual park pass fee; you make that payment separately upon arrival.  It increases your daily camping fee quite a lot, but even with the added cost we were paying about $33 (USD) a night, all in.  We recommend having a good idea of your plans for the rest of your Canadian tour, i.e., if will you be hitting any other national parks.  That way you can properly assess if you should get a daily pass for the park, an annual pass for the park, or an annual pass for all of their national parks (about $105 USD at the current exchange rate.)

We, of course, did not have this level of planning and thus opted for the daily pass.  Had we stayed one day longer, an annual pass for just Kejimkujik would have been better, and since leaving Keji, we have already stumbled across another national park and paid a one day admission fee.  The amount we have spent is a little short of halfway to the price for two annual passes to all of the Canadian national parks, so if we hit a few more, especially if it includes a few days of camping, it may turn out that we made the wrong decision. Oh well.

So, Kejimkujik: we had a good time despite a moderate amount of drizzle and rain.  Our site was located in a fully wooded area with medium tree canopy over every spot, which is exactly how we like it.  This made it beautiful and shaded, though the temperatures probably would not have required A/C use anyway, which was good because we did not have a fully working electrical post for the first two days.

I assessed, correctly it would turn out, that the 30 amp breaker was bad, and unfortunately the park’s maintenance electrician was off duty.  They offered us the option of switching sites, but we had already fully set up, and the regular 15 amp plug in would be fine to charge our batteries and run most of our stuff if we were careful.  RV Pro-Tip: you should carry adapters to convert your main shore power cable to all options, 50, 30, and 15 amp.  They had us fully up and running first thing on day three.

Another lesson learned: the serviced sites are electric only, but they do have a large multi-lane dump and fill station.  Unfortunately, all of the fill stations assumed RVs with a gravity fed, top fill option; none of the stations had a threaded connection for those like our rigs that require it.  We have been doing this RV thing long enough such that we are in the habit of leaving all of our parks with a full water tank and empty black (sewage) and grey (shower and sinks) tanks, so despite having already dry camped for two nights we would be fine, but it was still a surprise. 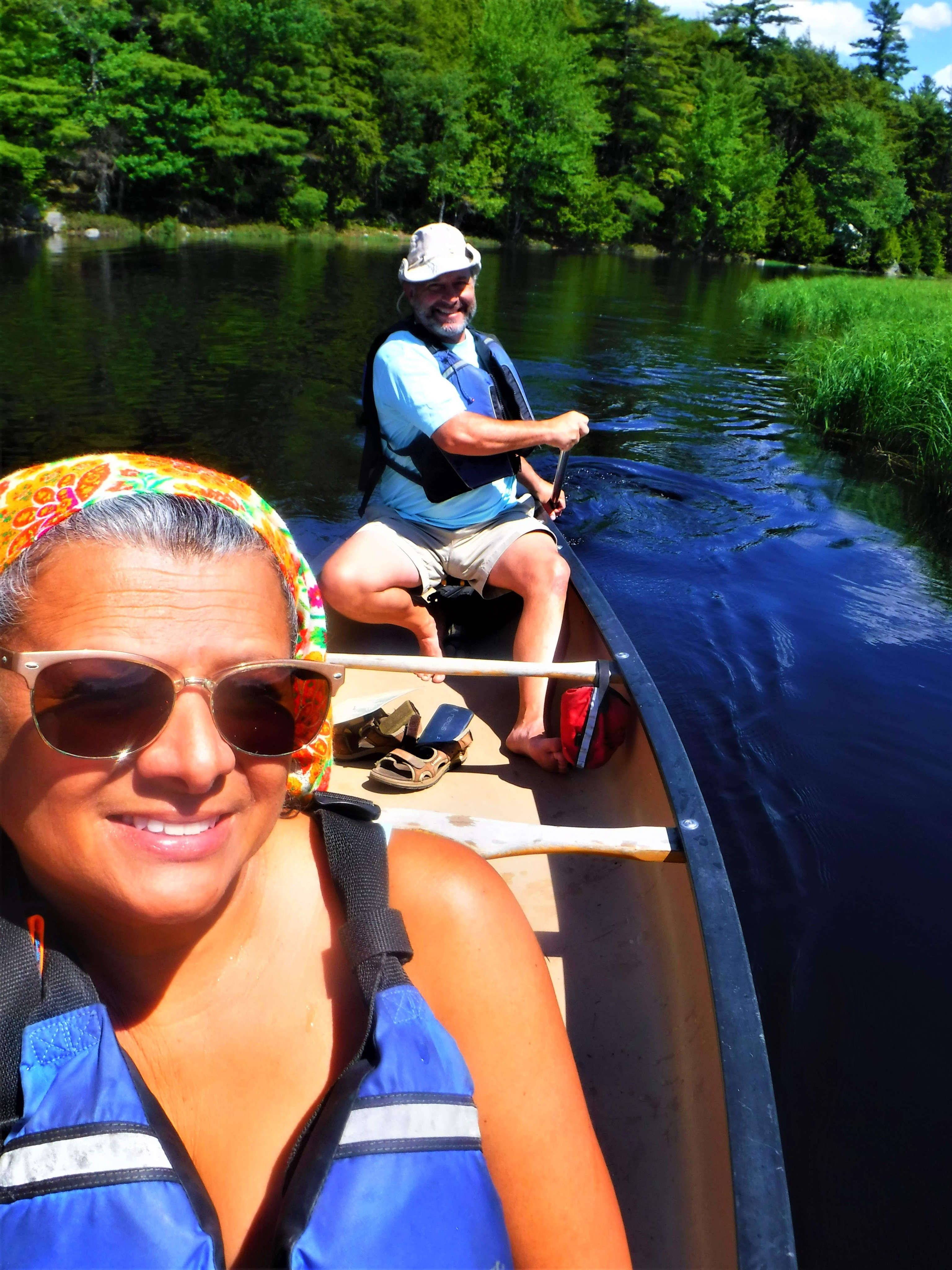 While sorting out the electrical issue, which entailed driving back and forth between our site and the camping registration office, we experienced a bit more drama: the bicycle rack mounted to our spare tire on Loki’s tail gate fell off, with both bikes attached.  The mounting plate completely failed, dumping the set onto the road, substantially bending the back rim on my bike.  We are lucky this did not occur at speed on a main road!  I was (barely) able to ride the wobbly bike back to camp, brake rubbing and derailer clicking the whole way.  I am no longer a fan of the spare tire mounting system.  Hopefully Thule will provide us a refund. 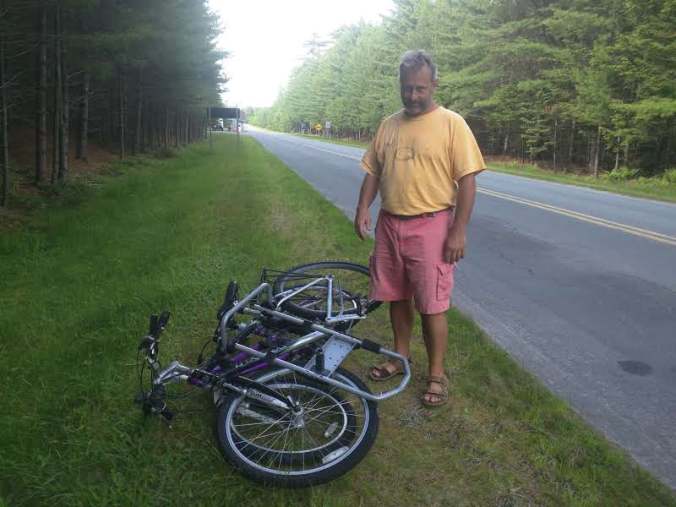 The weather meant we were unable to take full advantage of our stay, particularly the apparently spectacular star gazing this dark sky area can provide, but we made the best of it.  We explored several recommended areas by car and foot and did some geocaching both in the park and the nearby small towns.  On our last full day we rented a canoe for an afternoon on the rivers and one of the big lakes, which yielded some close up encounters with five or so doe and fawns. 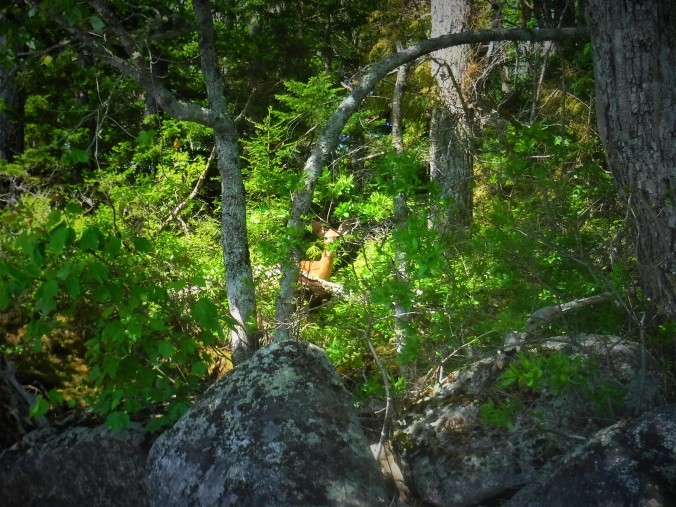 There’s a deer in there.

On our final night we had clear enough skies to enjoy a nice bit of stargazing, but would have really enjoyed one of the dedicated night time guided explanations in the designated observation circle nearby.  Our timing was not right for that, so perhaps on a future stay.   Also, we did not make it over to the coast to see the Kejimkujik seashore annex, and learned shortly after we left that park officials had closed it for excessive bear activity.

16 Geocaches during our stay.

Blog status: After a flurry of ten posts in June we got Shell On Wheels blog to under three weeks out of date.  A lackadaisical two posts during the first ten days of July, however, dropped us back a bit, but with this post so quickly following our Lubec one, we are back under three weeks behind.  Getting close! 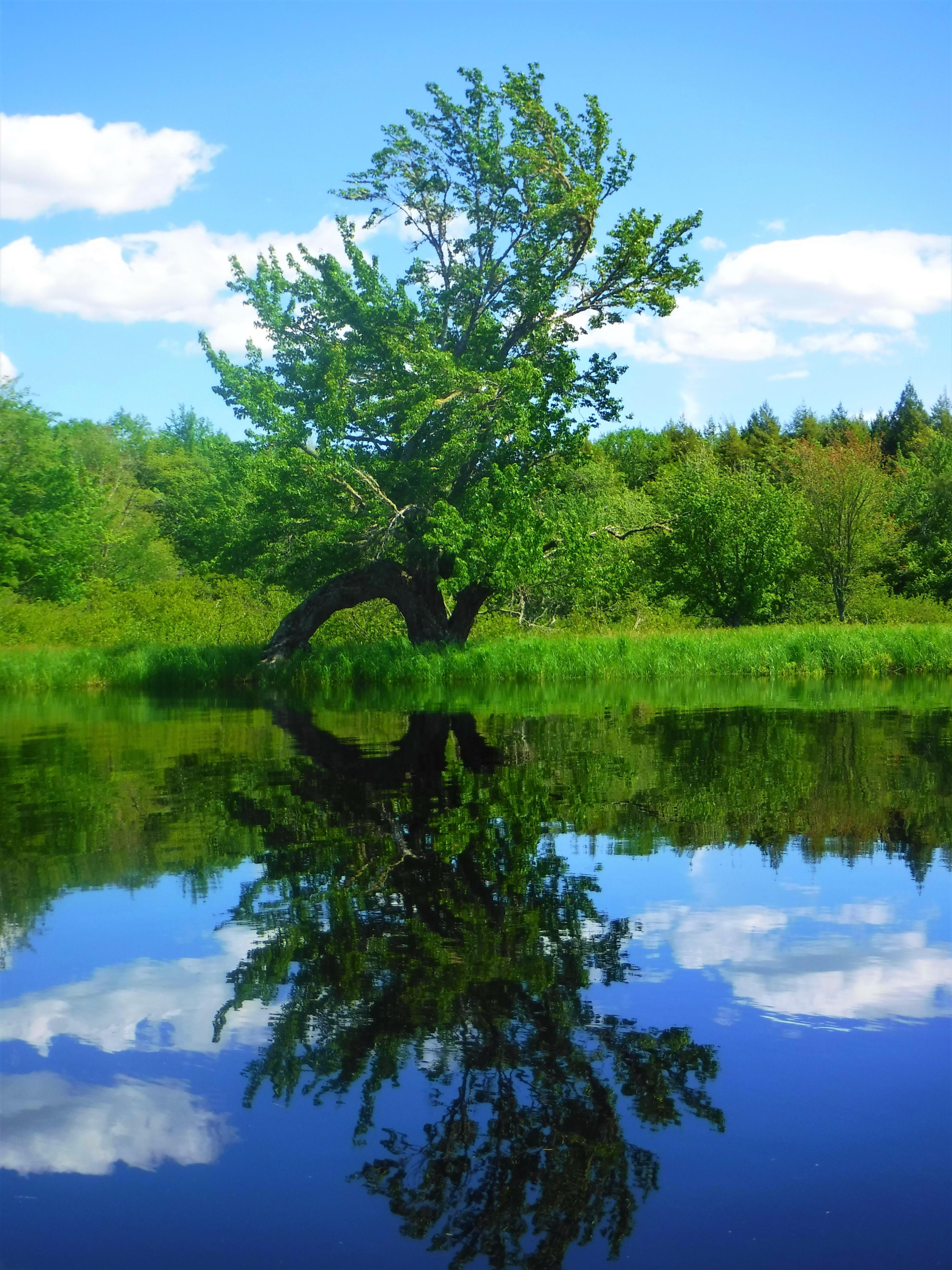