Nearly five years into full time RVing and on our third tour of the East Coast, we are focusing on, in addition to seeing family and friends, revisiting those regions and parks we really loved, skipping over those that were merely fine or just don’t work for this itinerary, and hopefully finding some new fantastic stops as well.  This can produce mixed results like it did in Savannah, a place we really enjoy, but with their revised visitor center rules we were forced to seek alternative accommodations.   We had great visits with Mom and Tim in Wilmington and with Linda and family in Chesapeake, where we stayed at our third military campground in as many visits.

I am not sure we are even supposed to be on this road.

After our longer than expected Delaware stop we needed to pick up the pace to stay on our intended schedule, and so we skipped past New Jersey, Pennsylvania, New York, and Connecticut.  Such skipping was not without drama.  I planned a bit of a westward detour to avoid passing through New York City on I-95 and the egregious toll fee on the Goerge Washington bridge.   Despite my research and intentions our GPS kept trying to reroute us to a cars only parkway, which resulted in several last minute changes, some tight maneuvering in towns west of the Hudson River, and a good amount of stress.  Eventually we found a mostly legal route to the Tappanzee Bridge, and it was all smooth sailing after that. 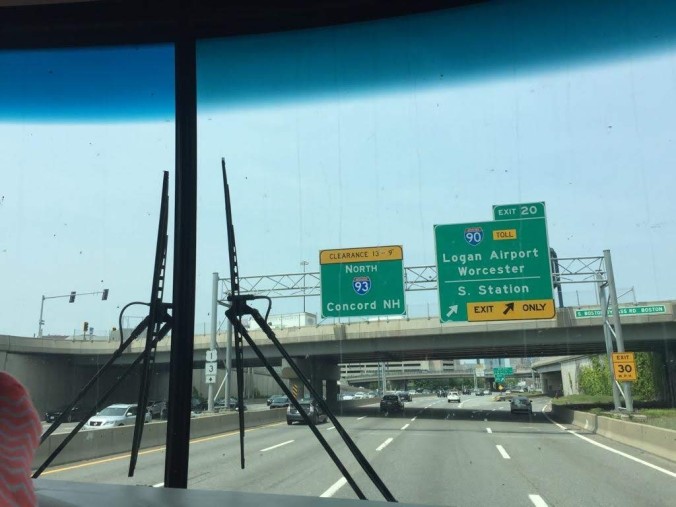 But we made it through and it’s all down here from here.

So eight hours into our drive, far longer than our preferred daily run, we finally made it to Carr Point Recreation Area in Portsmouth, managed by the Newport Naval Station across the bay.  A tiny park consisting of only six no frills sites in almost every way: no shower house, no playground, no trees, no concrete pads, no camp host, no wifi, no dump station, no almost anything except power, water, and unobstructed views of the Narraganset Bay a stones throw from every site.  That’s why we come here.

Unfortunately, this would be a bit of a lazy stop for us: the first day was shot due to the drive, we had a couple of days of foul weather, and started things off with a medical issue.  Rose has been having some upper abdominal pain that we generally attributed to a strain or cartilage inflammation, but it got worse over a couple of months, so we went to the local urgent care.  They were savvy enough to tell us that the type of tests they would need to run would entail going to the hospital, so we might as well just go straight to the ER.  Newport Hospital is not only in our TriCare insurance network, it was also one of the better ER visits either of us had experienced.  We got in quite quickly and with minimal fuss, and received excellent care and attention.  X-Rays and fluid test results revealed mostly normal readings, and the doctor assessed her as having a peptic ulcer.  Medication and diet change has made significant progress already, and here’s to more.

Rose feeling better for an outing during a break in the rain.

Despite some bad weather we found the time for a few outings, and took advantage of being back on a base to visit the commissary and thrift store.  During a trip to downtown and historic Newport we stumbled across the B&B that we stayed at during a weekend visit from Rose while I was attending school in Newport while we were still dating!  We also did some casual geocaching in the area during breaks in the weather.

A casual dozen geocaches found during our stay.

We met Roy and Theresa, our neighbors in the campground, and enjoyed a couple of evenings of cocktails and world problem solving conversations.  It turns out both of us are on RVillage, a social networking site specifically for RVers, and we are now keeping up with them as they enjoy a 49 day guided caravan tour of Maine, New Brunswick, Nova Scotia, and Newfoundland.   Since our plans take us to Eastern Canada around the same window, we hope to meet up with them again. 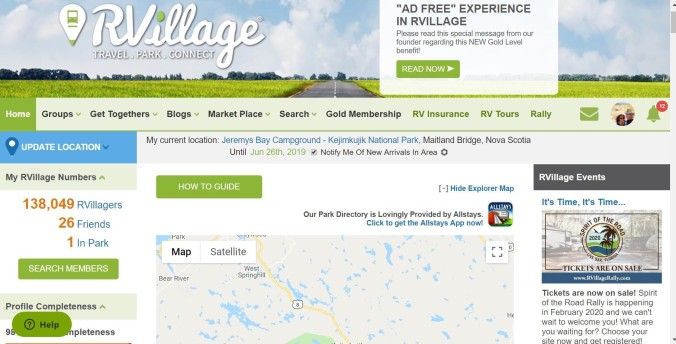 Front page or our RVillage account.  Other than messages, it allows you to see other Villagers in your campground or those at your future stops.

Catching up! We are only three weeks behind on the blog now, and will close that gap significantly with a couple of upcoming posts about our wonderful stay in Maine.

3 thoughts on “Five Days in the Newport, RI at an underrated Navy Campground”