While the Winter weather, beautiful water, and general “living in paradise” conditions are a major reason we and so many of the other Sigsbee campers keep coming back to Key West, another major draw is the social atmosphere here in the RV park.  Of the two hundred or more different parks we have visited, none can come even close to the constant party atmosphere that pervades this place.  And it seems there are more events added every season, though part of that is simply that we know more people each year, and thus get invited to more things. 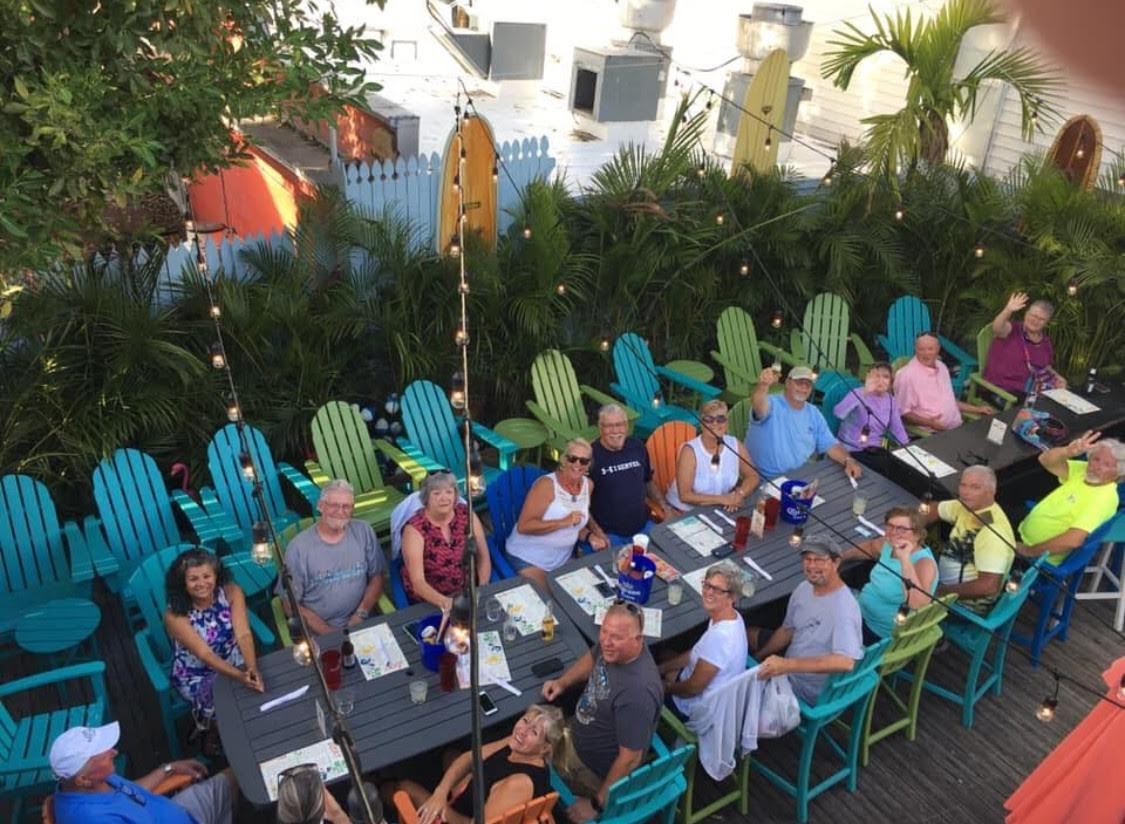 Arial view of Lucy’s back porch during one of many Tuesday gatherings there.

Things started off the day after our arrival with the annual Sigsbee Polar Bear Plunge.  This, obviously, involves a group dip in the bay, in waters that are merely a bit chilly compared to what our northern countrymen experience.  I think it was all of about 72 degrees this year.  The plunge itself is followed by an outdoor potluck breakfast complete with Mimosa’s and Bloody Mary’s, of course. 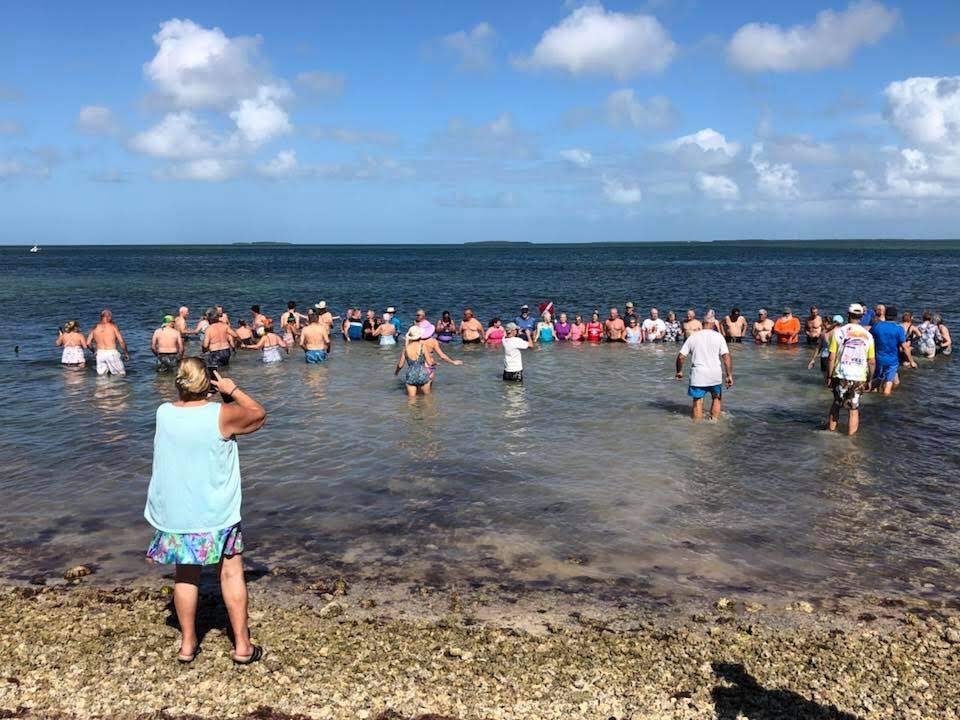 Like many of the Sigsbee events, this gets bigger every year

In past years a portion of the social activity was coordinated by the base’s Morale, Welfare, and Recreation department.  But last year, in the wake of the Hurricane Irma, MWR pretty much dropped out of the party organization game.  Into that gap stepped a few Sigsbee stalwarts, particularly Eddy and Tina, determined to continue some of our favorite social traditions and perhaps add a few more.  One of our main events is the Sigsbee Shuffle; a moving party with multiple hosts providing a drink and light hors d’oeuvres.  Always a good time. 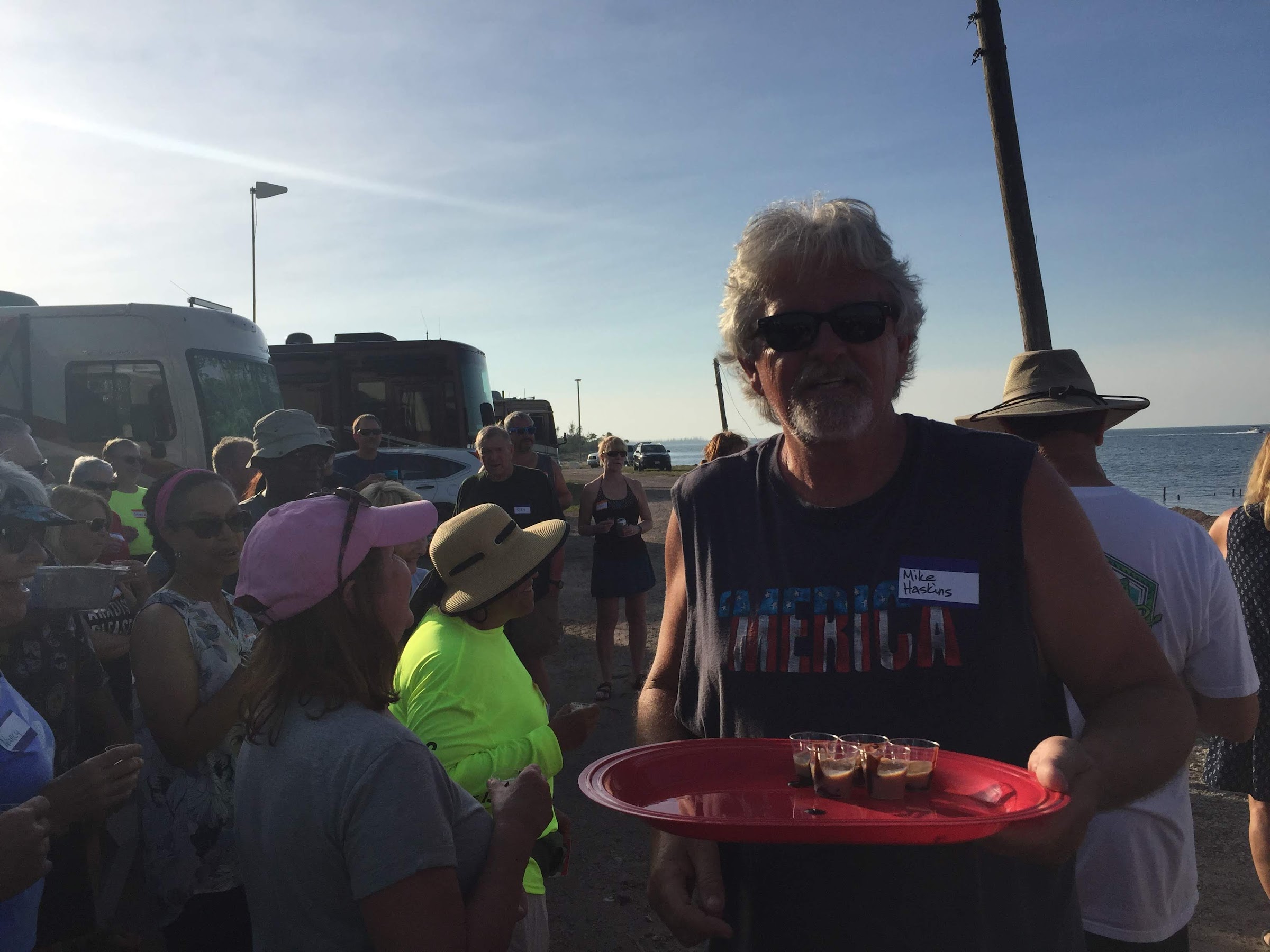 Shuffle host Mike handing out shots at one of the stops

Lucy’s Retired Surfer Bar & Grill has been hosting a $1 taco night every Tuesday for some time, with an every growing contingent from Sigsbee dominating the larger tables.  A few months before we arrived, they moved locations, and some felt the new spot was not quite as workable for our large group, so for the first Taco Tuesday of our Winter season, we tried another joint, Old Time Mexican Restaurant. 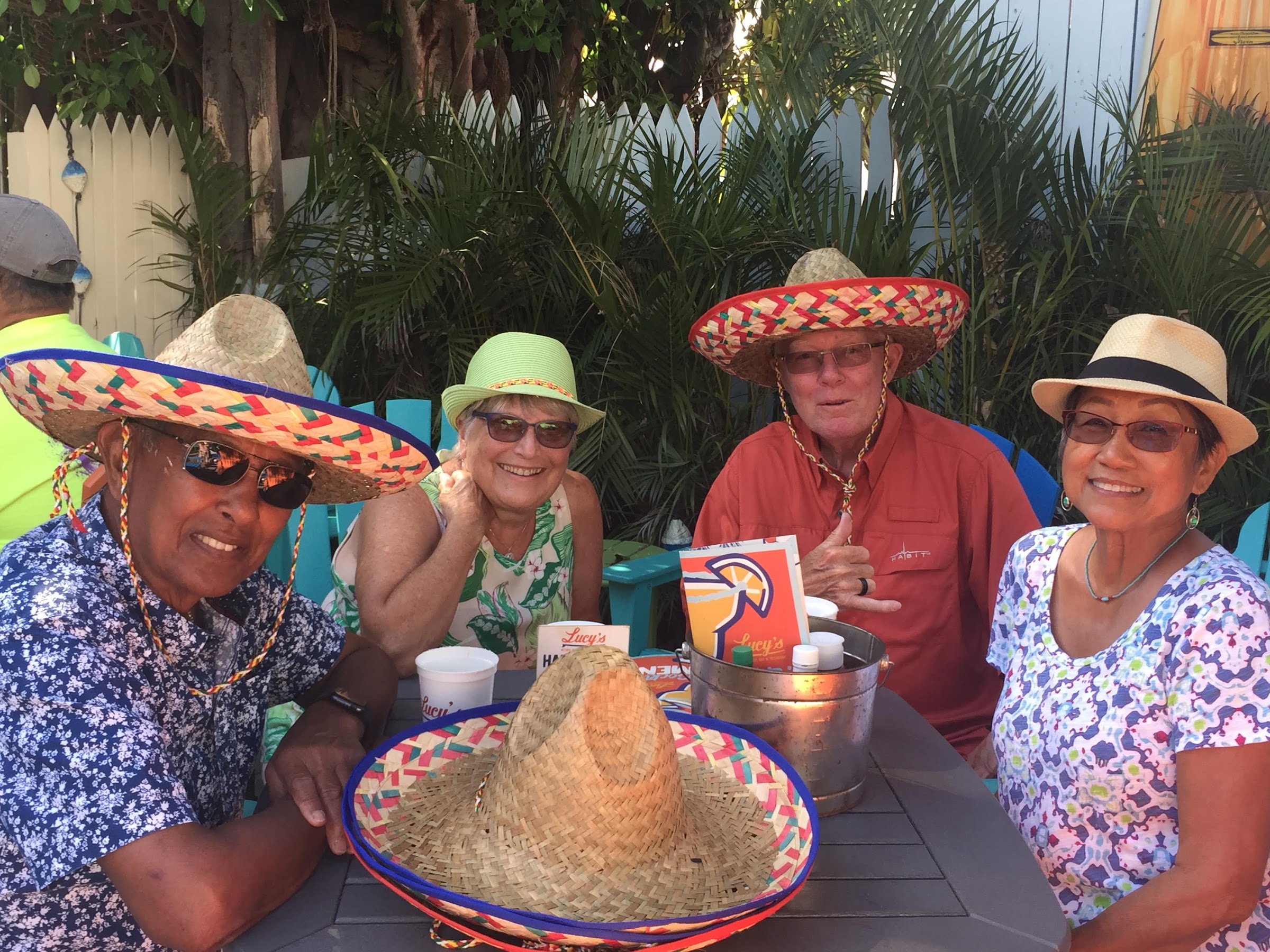 It had its perks (great sangria and an interesting taco variety) but a significant portion of our Sigsbee clan felt that Lucy’s couldn’t be beat.  So for most of the following Tuesdays for the rest of our stay we returned to there.  I think Lucy’s taco’s are bigger and better this year, and though the Corona price has increased from $2 to $3, it is still a fantastic value for Key West, and always a lot of fun. 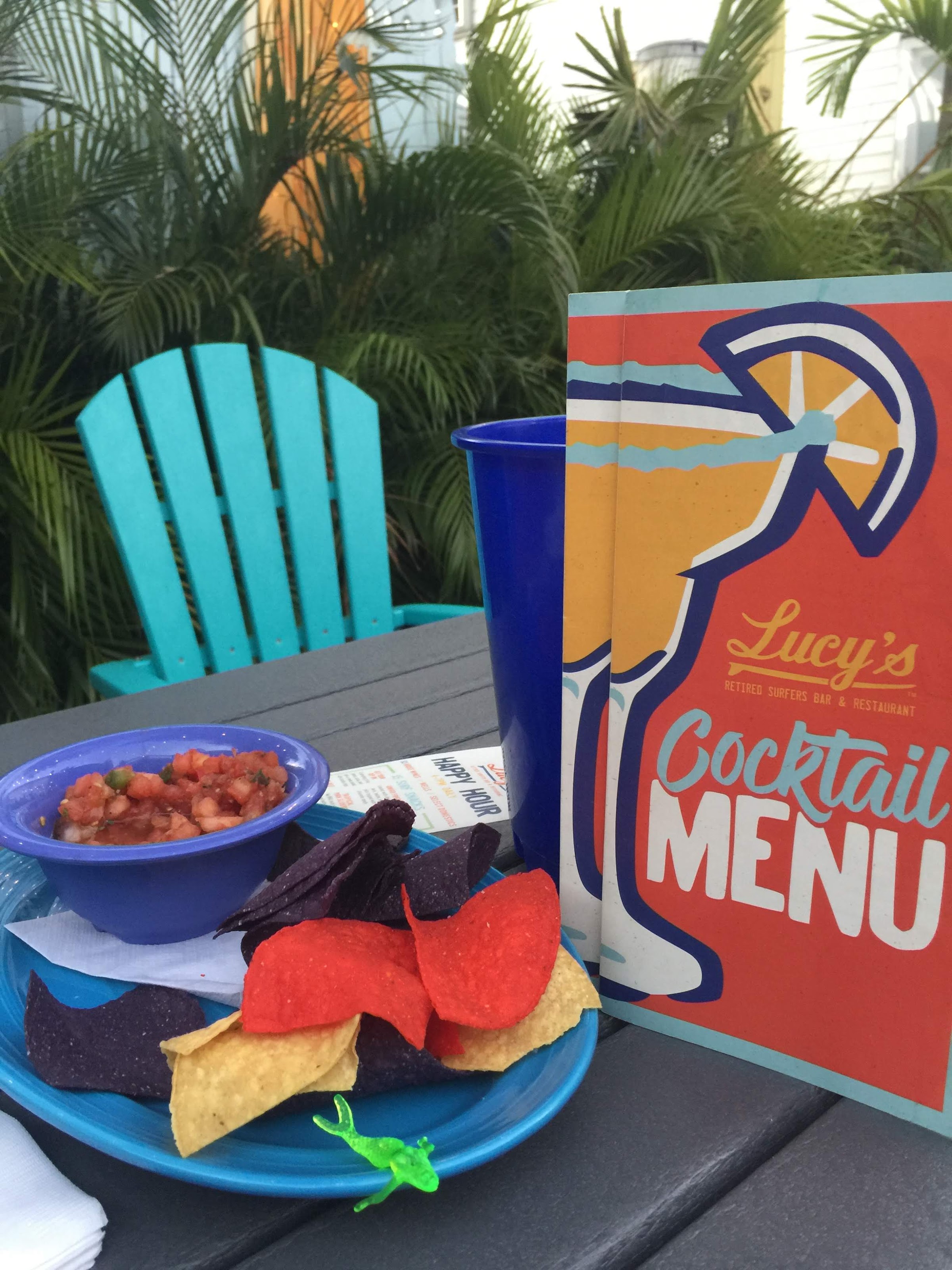 The only bar/restaurant on the Sigsbee Annex base is the Sunset Lounge.  As the name suggests, it is perfectly positioned for a great sunset view, has decent food, and frequently has live music.  We had a big turnout from the RV park for the No Name Band’s appearance there.  The band was started by two members of our Sigsbee community, Mike and Nelson, and they always provide a great, energetic set of mostly classic rock. 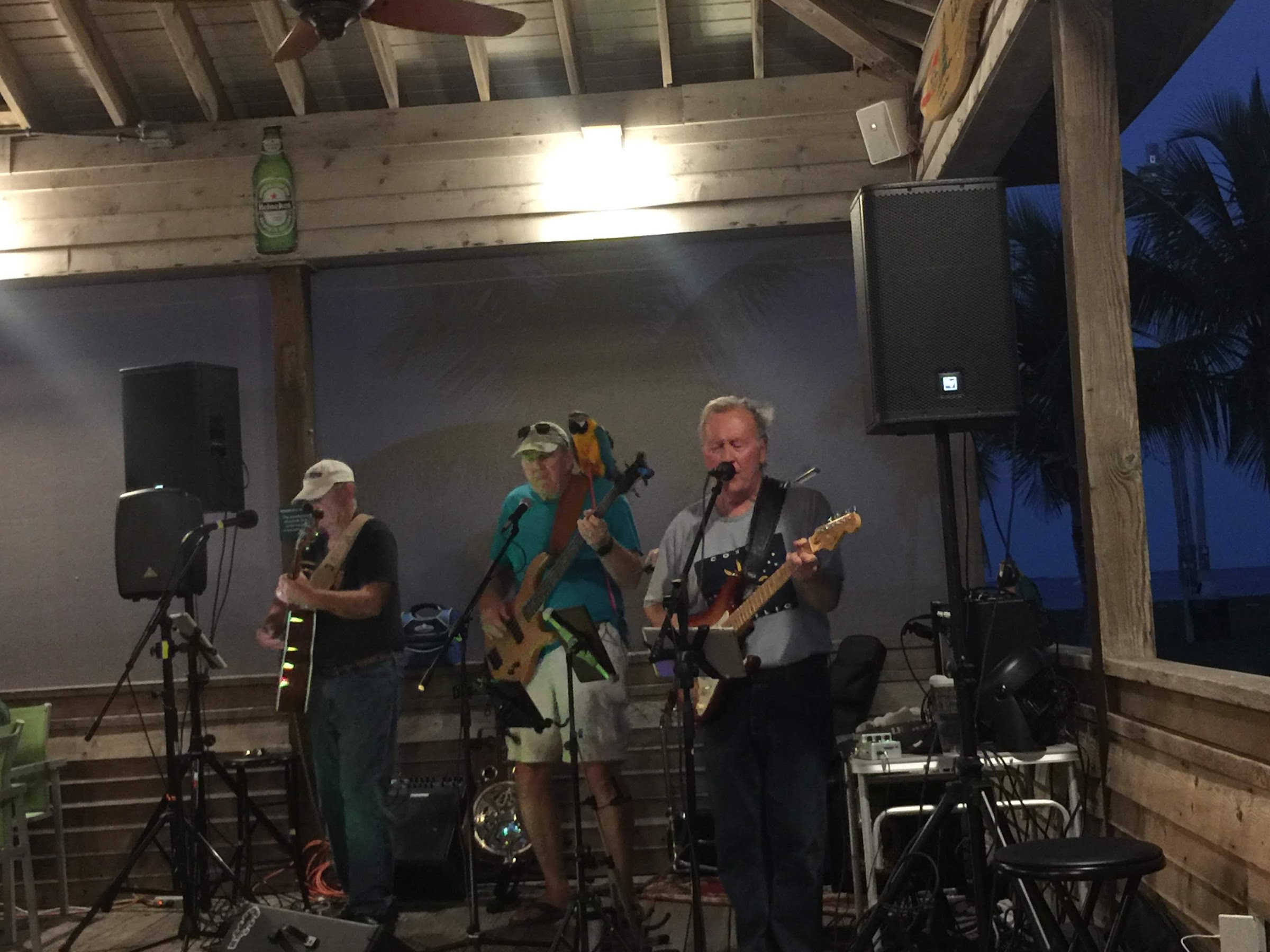 From Left to Right, Dave, Nelson, and Mike.  Band Member Debbie not in this set for some reason.

The VFW was closed due to hurricane damage last winter, but reopened with a vengeance this year.  They offer half price Wing Wednesday (comes out to about 50 cents per wing) and Prime Rib Night on Thursday.  We took a group of eight for wing night and had a great time made especially fantastic when Steve won $600 from a pull tab machine and picked up everyone’s dinner tab! 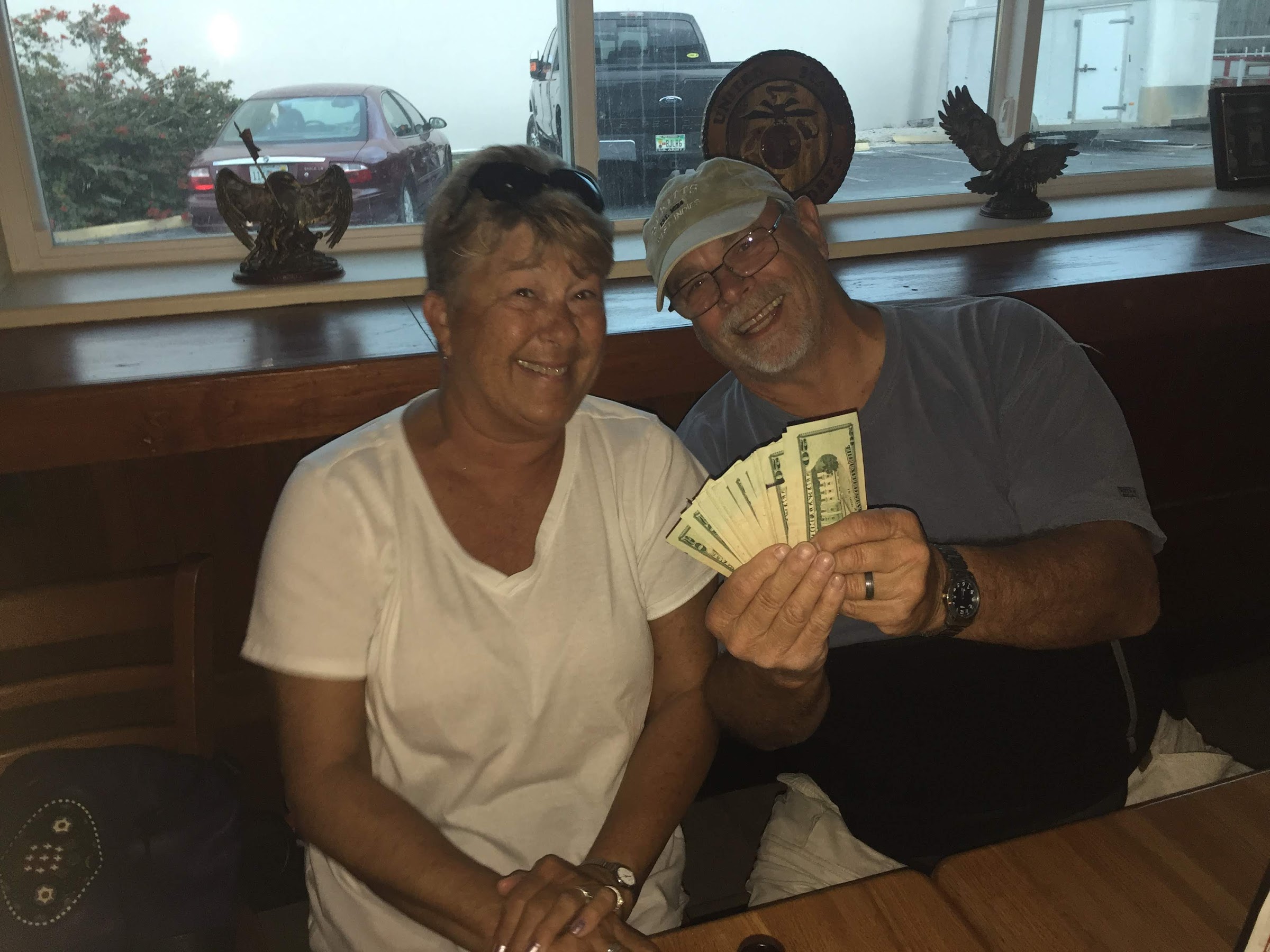 Deb and Steve with their winnings.

Another event becoming an annual tradition is Eddy and Tina’s blind wine tasting.  This involves every participating couple bringing a bottle of wine, restricted to whatever criteria our hosts decide.  Last year it was reds, under $15, and not sweet.  This year it was whites, under $10.  Eddy and Tina add a layer of fun by including a bottle of $2 buck chuck (Trader Joe’s cheap special) and a $20+ bottle of something as well.  Last year the cheap stuff actually one the most votes, though fortunately I think it only made the top three this year. 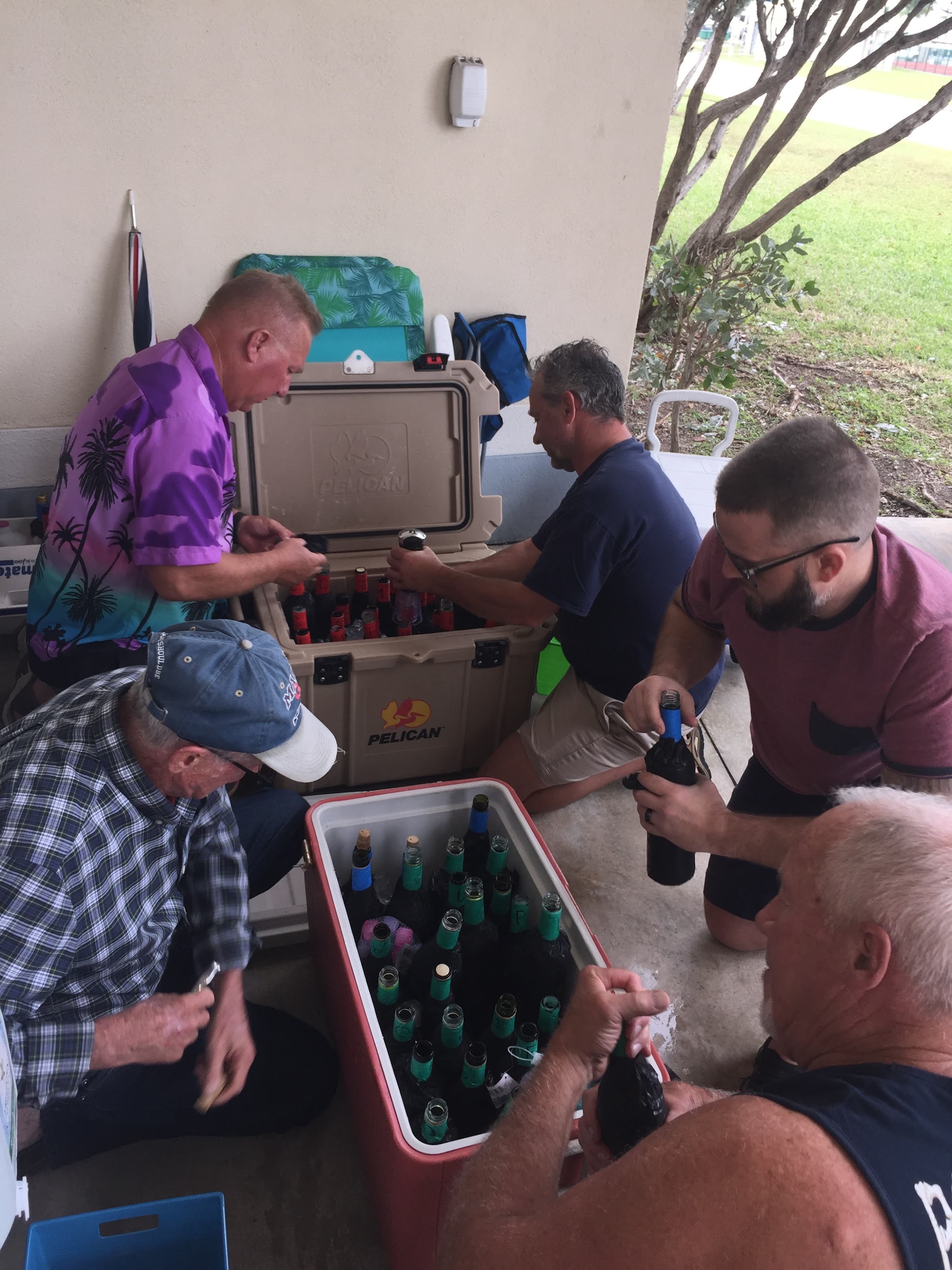 A group of us prepping the wine bottles for the big tasting.  We had about 25 bottles and couples last year, this year it was up over 70, and we had to split into three groups lest we all pass out or run out of wine.

I get that some people might find the Key West sunset cocktail cruises a bit over hyped, but when you get a large group of friends, fantastic organizers (Tina and Eddy again) and add in a costume theme, it completely lives up to expectations.  We had somewhere around 40 of our group participate, with most dressing up appropriate to the Gilligan’s Island theme.  Rose and I went as Mary Ann and The Professor, while Gilligan and Ginger were the most popular choices. 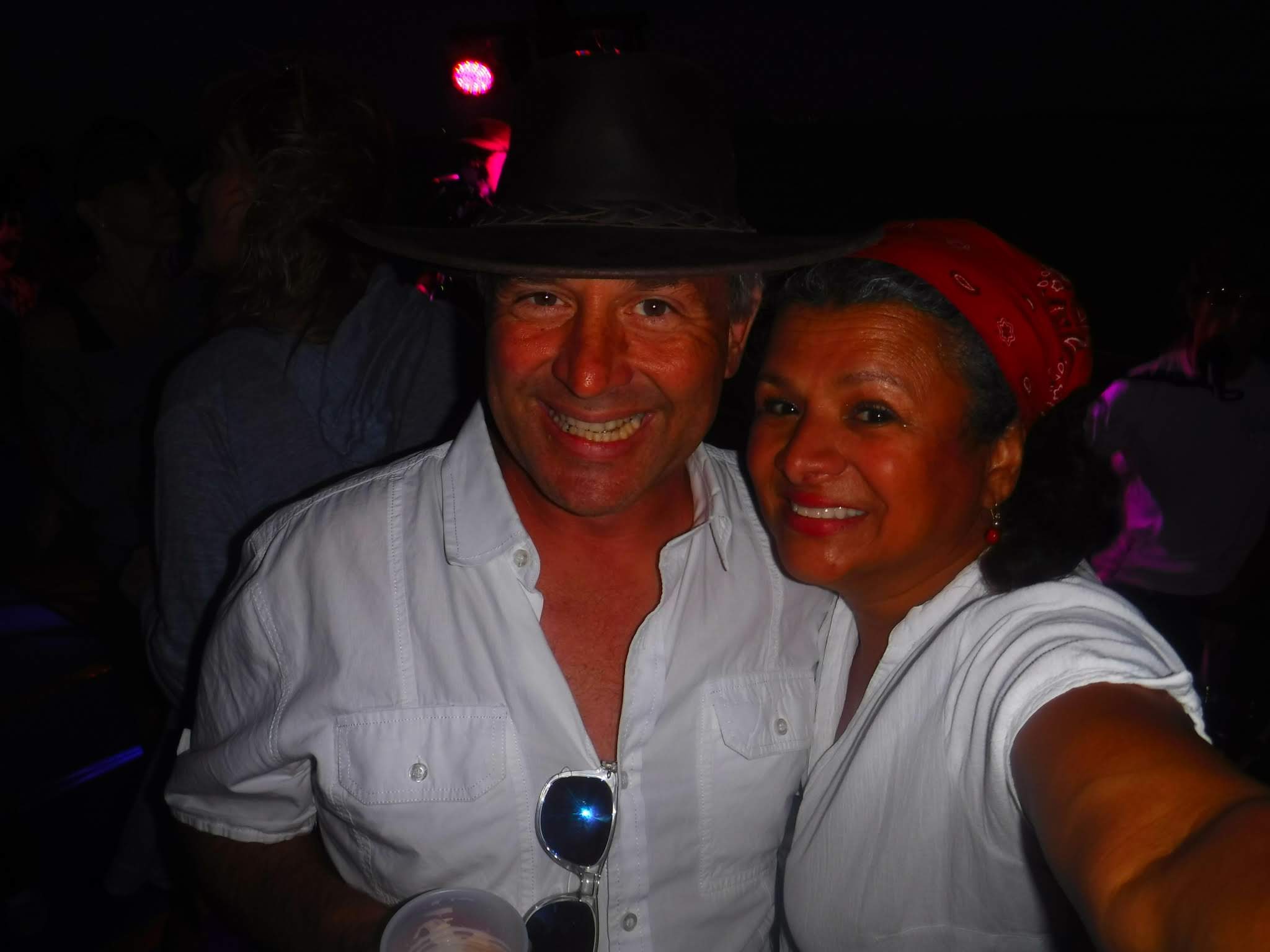 The Professor and Mary Ann

The No Name Band booked a Saturday gig at Mangrove Mama’s, a long standing Lower Keys iconic restaurant 22 miles up the road on Sugarloaf Key.  We made carpools and had a big turn out that ended up completely overwhelming the wait staff.  The music was great, the food solid, but the “getting our bill” phase of the evening was utter chaos.  We mentioned to the owner that whenever he has The No Name Band playing, he can expect a big turnout from our campground.  We hope next time he staffs accordingly! 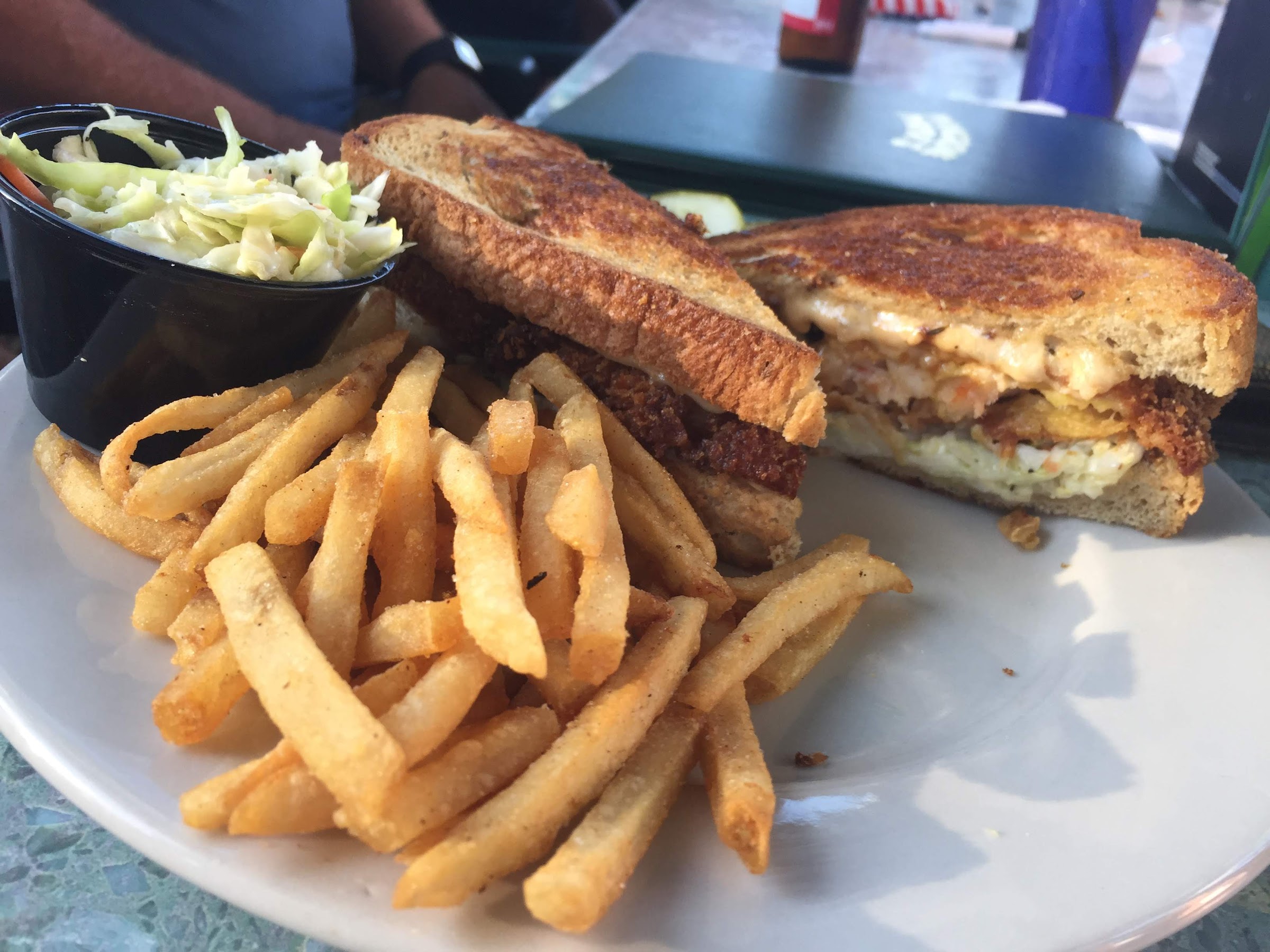 Another years long tradition among our group is the annual “Cinco de Marcho” party.  The name is obviously a play on the Mexican holiday, and our version is intended to celebrate all the holidays we will be apart.  Last year it was a day long party in a fixed location.  This year, Eddy and Tina created a significantly ramped up Sigsbee Shuffle with each host team assigned a different holiday theme.  We started at the ball field to get things going, as well as honor the memory of some of our Sigsbee people that passed away in the past two years.  RIP Brian and Dave. 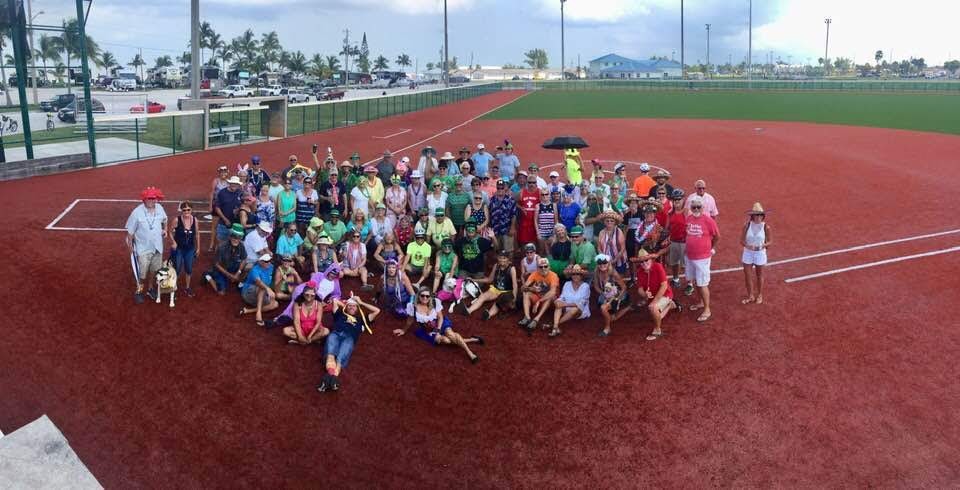 We volunteered for the host team assigned the Cinco de Mayo theme, and I can say with all honesty and humility, we were absolutely the best stop.  We had buckets of margaritas, walking tacos (small Fritos or Doritos bags topped off with taco meat, sour creme, salsa, and shredded cheese,) and Rose made a great frame prop for everyone to take pictures with.  Truly a great time, and we thoroughly enjoyed the Octoberfest, Fourth of July, and Saint Patrick’s Day themed stops as well.  We ended the long day back at the ball field for more drinks and softball of questionable safety. 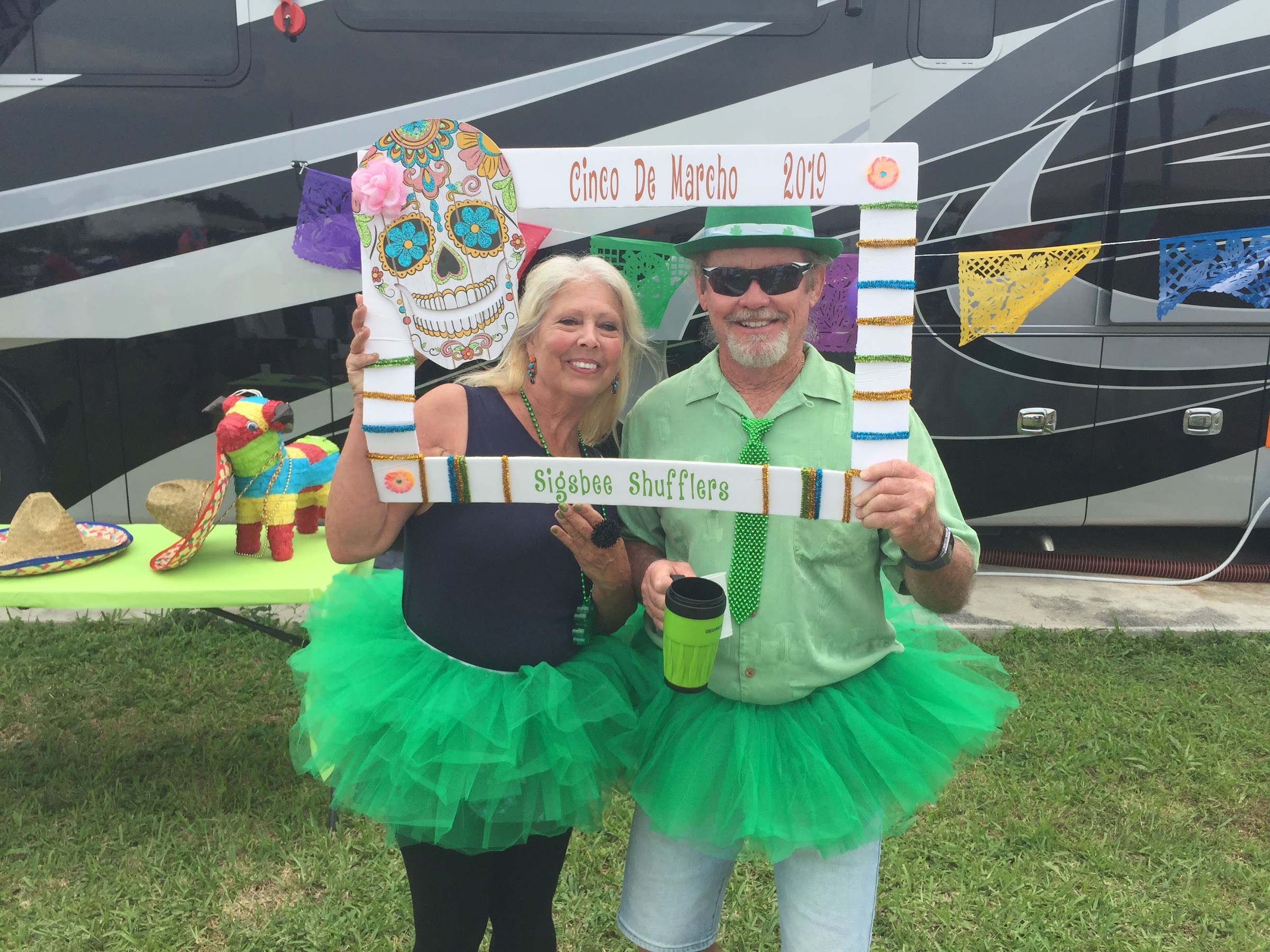 People were always throwing parties.  It seemed like not an evening passed that you would not see a moderate to large group gathered outside someone’s rig if you took a stroll or drive around the campground.  Jan and Bob hosted another big one to celebrate everyone who had a Birthday in January, February, or March.  It was, like most of our events, a pot luck style buffet with way more food than necessary. 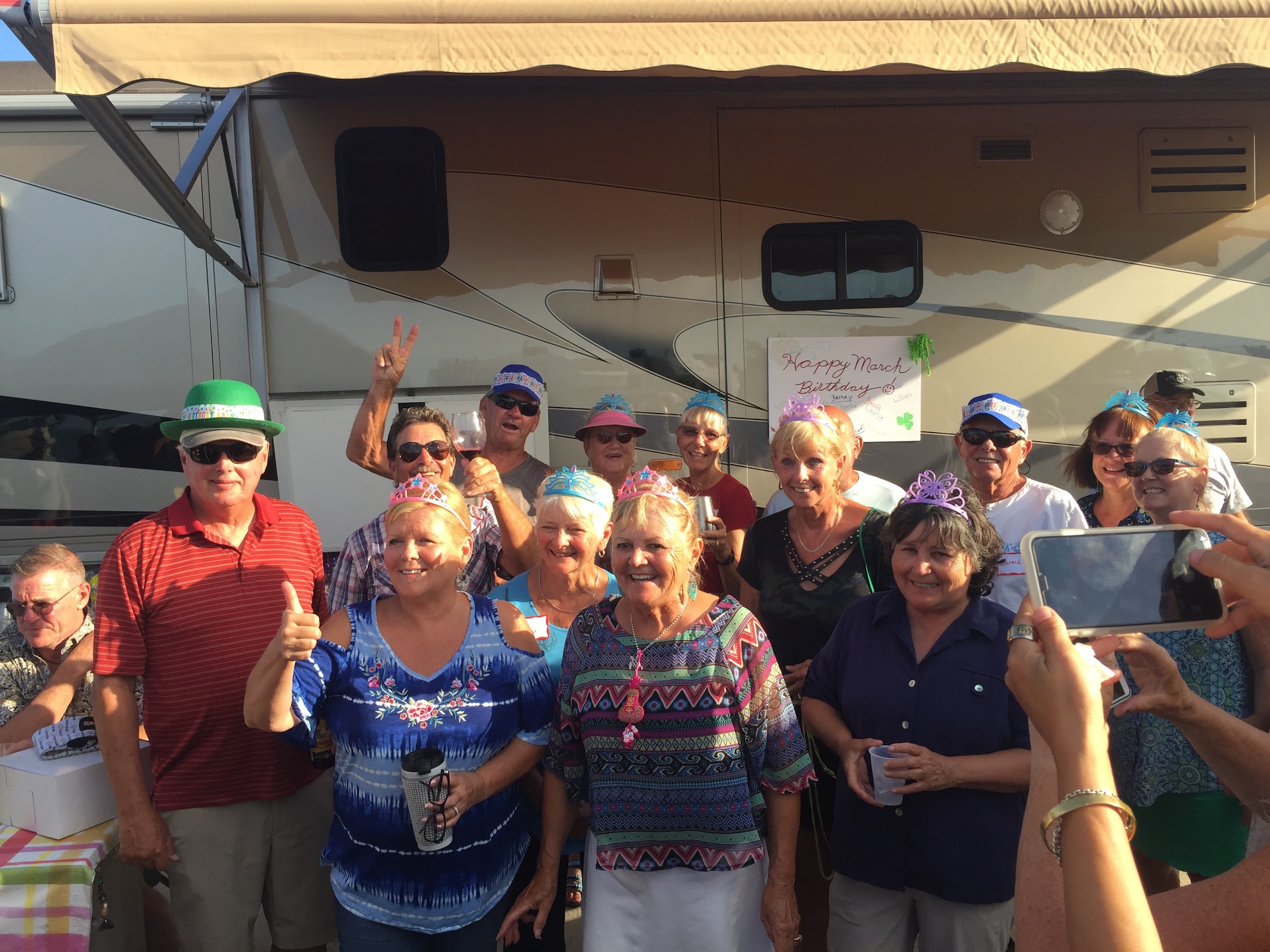 The Birthday boys and girls

I’m probably forgetting a few events (I just remembered the Superbowl Party and Leonard’s famous fish fries,) but the last one I will write up is Val and Joan’s sunset farewell party complete with live music from Val, Mike, Nelson, and others.  Mildly subdued since we were all saying goodbye, but a great way to end the Key West party season.  Until next year, Sigsbee crew, when it is possible we will have even more to write about if our livers allow it. 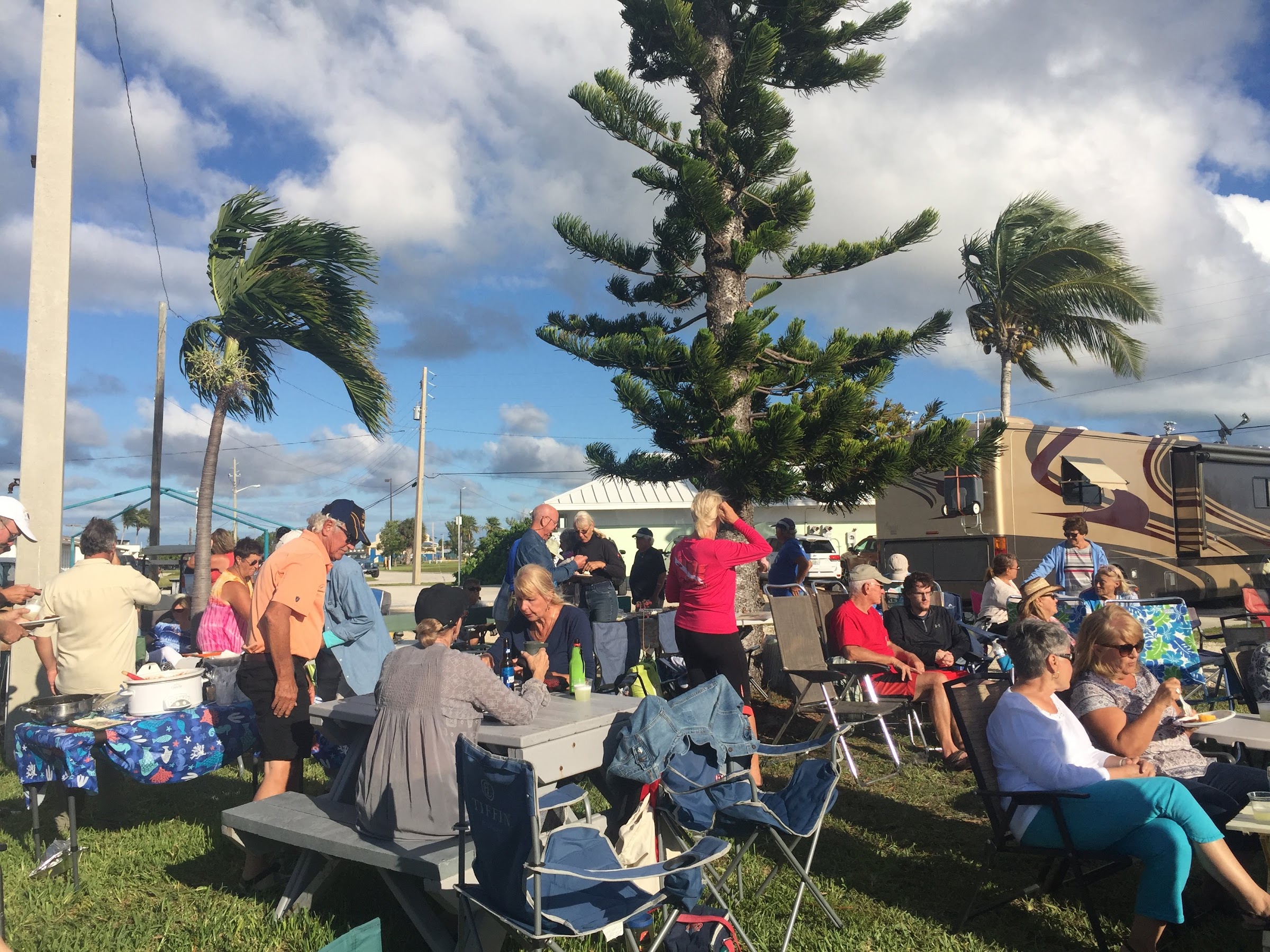