When we began altering The Big Kahuna, one of our early changes was the removal of the aged and inoperative propane furnace system.  When the old Dometic refrigerator broke beyond economical repair, we elected to replace it with an affordable apartment style fridge rather than an RV model, which are very expensive, though they usually have the ability to run off either electricity or propane.  At that point we decided to just convert everything over to electric and remove the propane system entirely, which opened up an entire underbelly storage compartment and gave us a few bucks from the sale of the big tanks.

This meant that when drycamping in the old bus we pretty much lived off our little Honda generator, running it for most of the day if permitted by campground rules, and turning it off at night.  That process was complicated by the uncontrolled power draw from our inverter/house battery charging system, which, during our very first fulltime overnight stop, we had discovered demands up to 22 amps at initial charge.  In order to keep the Honda from overload tripping, I had to manually open all the circuit breakers on the bus other than the inverter, then turn on the Honda, wait for the initial inverter charging load to settle down, and only then flip the breakers back on for the electrical outlets, refrigerator, microwave, etc. 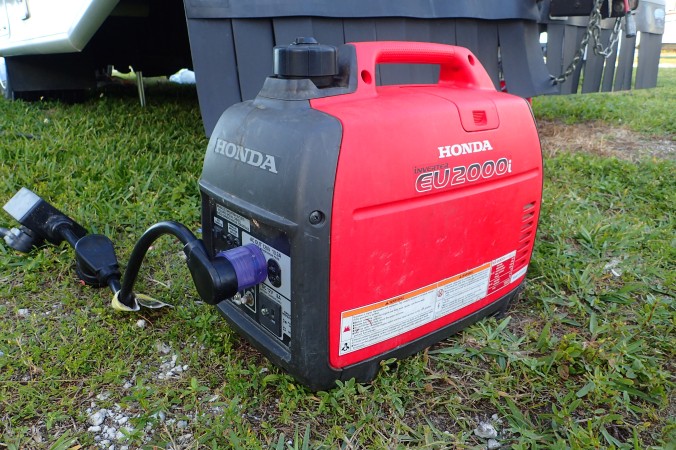 The best damn RV generator around.

Running without a propane fridge and a “nights only” generator also meant meant we bought a lot of ice.  As for air conditioning, the Honda 2000 can’t really handle that load, and Kahuna’s main diesel powered and poorly sound isolated Yakima generator was so loud under any significant load that we just never used it.

With our new rig, things are rather different, and so much more convenient.  We still have our Honda 2000, but now we also have a newer model and fully working Norcold RV fridge with automatic propane back up, a much lower power draw from our modern inverter, and a surprisingly quiet, hard wired main generator, an Onan 5500.  This means that whenever we turn off, disconnect, or otherwise loose electrical power, the refrigerator automatically shifts to propane and keeps things cold and frozen, even while we are driving down the road.

It also means that we don’t have to run the Honda for the entire day.  Our routine is something like this: wake up, feed the cat, turn on the Honda, and make coffee and breakfast while also charging the house batteries, laptops, phones, cameras, and other electronic devices.  After a couple of hours, off goes the Honda.  As the day heats up we can consider turning on the Onan to run the ACs.  We haven’t had to do that often since the weather has been so cool for most of our Key West stay that the RV is quite comfortable with the windows open and the fresh sea breeze blowing through.  I think we have run the Onan about 20 hours during the two weeks we have been here so far, and some of that was while I was working out a contaminated fuel problem in the Honda.  As night falls we turn the Honda back on for a few hours to charge everything back up for our evening TV and lap top movie watching.

The process is very cost effective, largely because of how incredibly efficient the fridge is running on propane: for the roughly 18 to 20 hours a day we run it this way, we are only burning roughly one gallon of the LP every two days!  The Honda 2000 is the generator of choice among RVers, which a quick walk around any drycamping area will confirm for you. I just took a look at my ten nearest neighbors, and eight of them have the Honda 2000, one has a similar sized Ryobi, and the last doesn’t have his generator visible, but its probably a Honda.  The reason nearly every RVer has this model is that they are very reliable (3 year warranty!), extremely quiet (53 decibals), light weight (45 lbs), and fuel efficient as heck (8 hours per gallon at 1/4 load, which is what I figure I’m at for most of our 4 to 6 hours a day of run time). 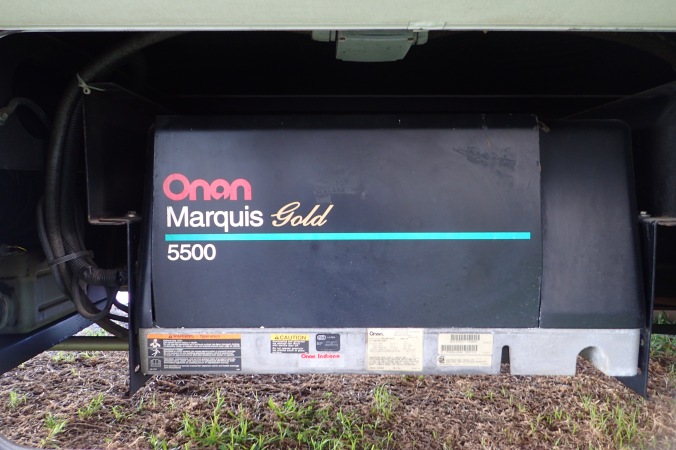 The Onan has the advantage of a push button start (as opposed to the Honda’s manual pull cord) and a huge gas tank (it draw from the RV’s main engine gas tank), and is not that bad for efficiency: a bit under 2 hours per gallon at 50% load, probably what we are demanding with one rooftop ACs running.)

It took us a couple of weeks to sort out our routine, but as of now I figure we are spending less than $5 a day running our electricity:

Incidentally, the exercise of figuring this out has made us more efficient, i.e., knowing the specific costs of things means we are more conscious of them and are therefor less likely to run the generator, especially the Onan, willy nilly.  We can look around, or more appropriately, listen around, the RV campground and hear the gentle buzz of generators for the entire permitted run time (7 AM to 11 PM).  Some of our neighbors run them all day; perhaps they don’t have a propane option on their fridge, or they always want the option of turning on the TV or the microwave without having to step outside and start the genny, or maybe they just don’t have the cost concerns we do.  With The Big Kahuna, we would have been right there with them, Honda on from the time the cat woke us up demanding food, until we turned off the TV at night.  Not having to do this is yet another reason we are happy with Serenity and all her modern conveniences.