So, we spent two days relaxing at Carrolwoods RV Park and the Grateful Sisters Vineyard before heading towards Wilmington, planning to drop off The Big Kahuna at the place from which we bought him.  We hoped to arrange for a mechanic to look at the starting and unusual transmission issues during the week he spent there.  I mean, so long as the bus started Friday morning we should have no problems getting him the 62 miles to a safe resting spot.  So holding our breaths, and with a bit of starter fluid sprayed into the engine to give us an edge, we turned the key and vrooom, he roared to life with no hesitation.  Whew.

So off we went, frustrated that we were still having problems we thought resolved from our numerous and expensive stays in various mechanic shops, but relieved that we would make it to Wilmington were we could safely get the latest issues examined.  That combined sense of frustration and relief lasted 22 miles before the relief part washed away.  As we approached the stop light at the Main St intersection in Shallotte, Kahuna refused to downshift, I didn’t catch it time to pull into the turn lane, and we stalled, blocking one of the two through lanes.  Damn it.

We had been through this drill before, and despite the stress and half blocked major thoroughfare I hoped that with a bit of cooling off and pressure relief on the transmission we could get moving again.  Alas, no. With a deputy sheriff soon on scene, we needed to fish or cut bait: get started now or call for a tow.  So once again I was on the phone with Progressive’s road side assistance subcontractor, amazed that they were still taking our calls, arranging for a tow while also furiously Googling and calling around for a big engine truck specialist that could deal with our problems. 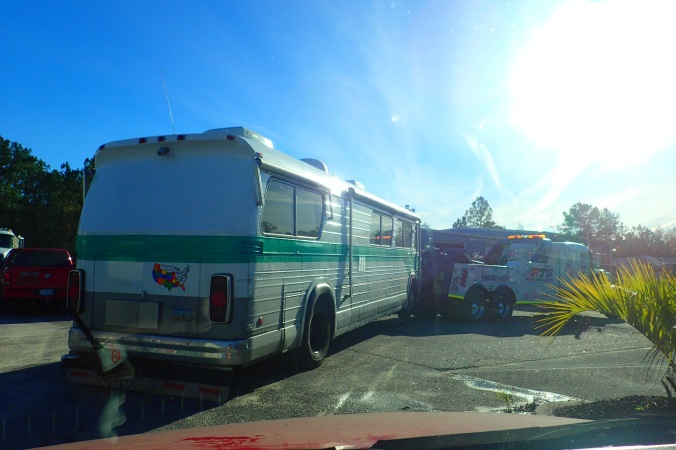 Three hours later we were under tow towards Triple T Trucking in Wilmington.  Rosemarie followed in Loki, while I shared the ride with the tow truck driver, a talkative and enthusiastic believer in pretty much every conspiracy theory every known.  I get sucked into such conversations on a surprisingly regular basis, and I did my best to counteract some of the, er, more colorful opinions from him.  And he was, to his credit, really willing to listen and absorb contrary opinions.  At one point, after a particularly imaginative theory he tossed out at me, he stated “You probably think I’m crazy, right?”  “Not at all,” I replied, “I don’t think you’re crazy, I just disagree with pretty much everything you have said.”

So we dropped off Kahuna at Triple T, signed some paperwork, and within the hour loaded up Loki for the four hour ride to Norfolk to visit or relatives Linda and Jayson for a pre-Thanksgiving celebration.