After spending one night in Sunny Meadows we planned to push on to Iowa and Waubonsie State Park, hoping to get one of the walk in sites there since we are inside the reservation window.  Unfortunately The Big Kahuna had other plans, and though the engine would turn over, I just couldn’t get him to catch and fire up.  I had been noticing some difficulty starting both before and after the Greeley repairs, but was not sure if it was getting worse and how much the recent cold weather in Nebraska might have contributed.  I tentatively tried a bit of starter fluid, but even that wouldn’t do it.  So once again it was mobile mechanic hunting time. 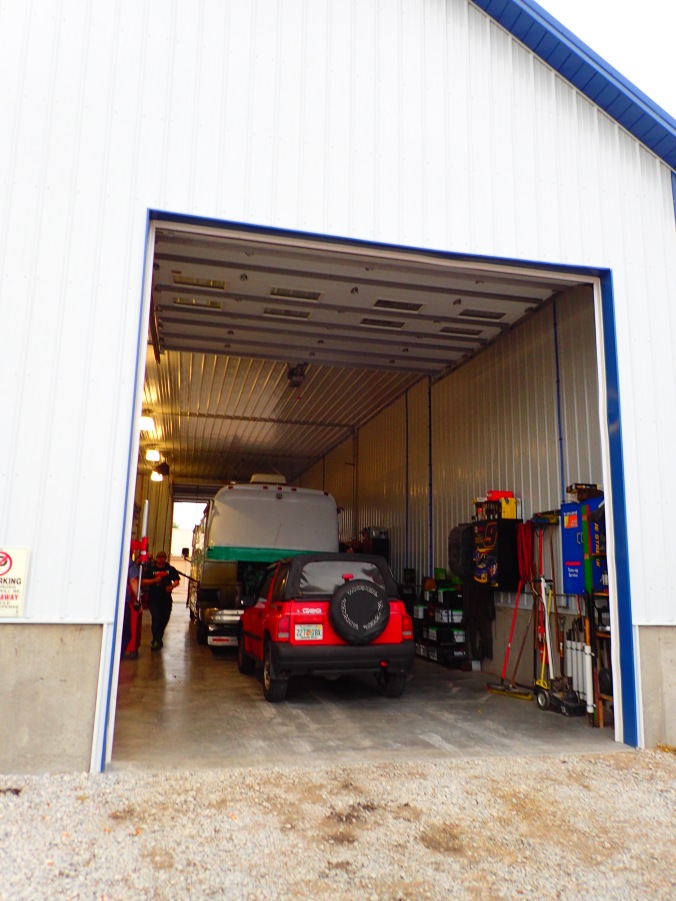 Pulling in to the shop.

We got a recommendation from the Pilot station just up the road, and within the hour Andrew from Flatwater Repair was on scene troubleshooting.  He reset the master kill switch, verified a few other components were working correctly, and got us started using a bit more starter fluid than I was willing to spray into the system.  He strongly recommended we come down to his shop, fearing we had an air leak leading into the fuel lines allowing the fuel to drain back into the tank each night. This made sense since it seemed that I have been having progressively  more trouble getting Kahuna to start as time has gone on, suggesting that the leak was getting worse. 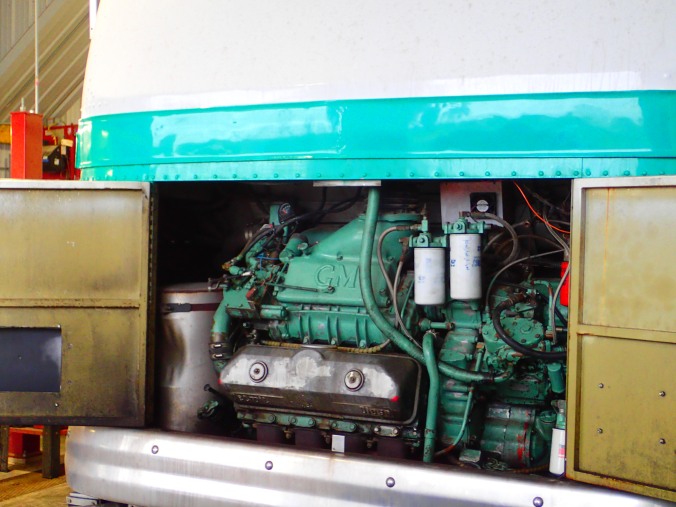 We followed Andrew ten miles down the road to the shop in Overton.  Flatwater assessed that we also had very badly corroded connections on every electrical lead between the batteries to the starter.  They re-soldered and connected them all, significantly improving our batteries’ starting capability.  The degraded current flow was exacerbating the probable fuel air leak problem: before the connection improvements we didn’t have quite enough juice to keep the engine cranking long enough for the fuel line to refill.  Fixing the connections was preferable to their original concern, that perhaps our ten month old starter batteries were going bad and not able to hold sufficient charge. 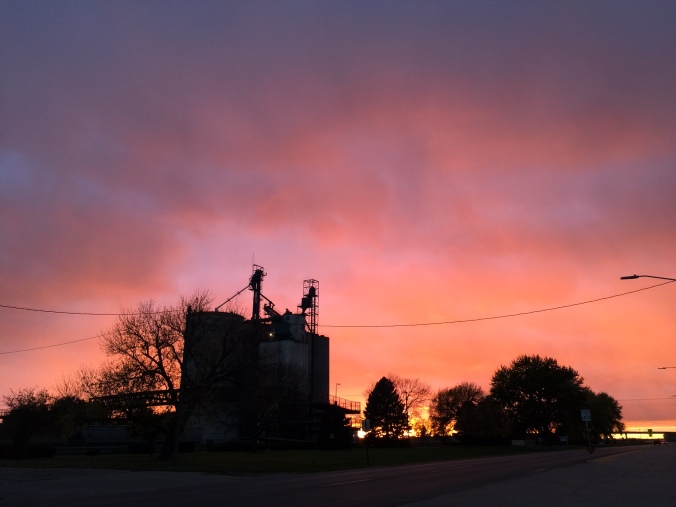 At least we had a nice sunset!

As for the suspected leak itself, when Flatwater’s owner, Bob, took a look he advised us to proceed on to Interstate Power Systems in either Lincoln or Omaha, as they were Detroit Diesel experts.  I contacted them, and unlike an unfortunately high percentage of supposed truck mechanics, they did not bat an eye at the age of our bus.  We made an appointment for the next day, Saturday. 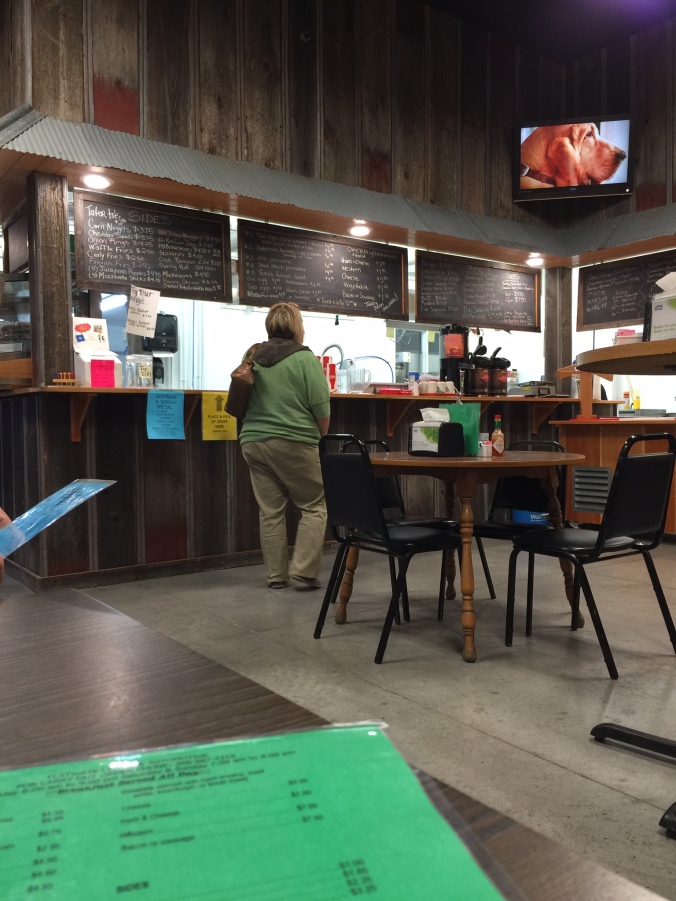 And a diner type restaurant attached to the repair shop and gas station which served quite good grilled cheese and Reuben sandwiches.

At Bob’s suggestion we spent the night drycamped in the hard packed dirt lot across the street, generator hooked up to power our fridge, inverter, and accessories.  This lot is immediately behind a set of RV-style electrical connection posts owned by the railroad and used by truckers in their employ.  It seems we can’t escape trains: The Clarion hotel is a couple of blocks from heavily used tracks, Greeley RV Park is within earshot of them, as are Chimney Rock and Sunny Meadows.  Fortunately I find the sound of trains passing in the night almost comforting, which is a good thing because we were camped literally within 50 feet of the quite busy tracks.  Rosemarie is a little less enthusiastic about any future RV parks within miles of trains. 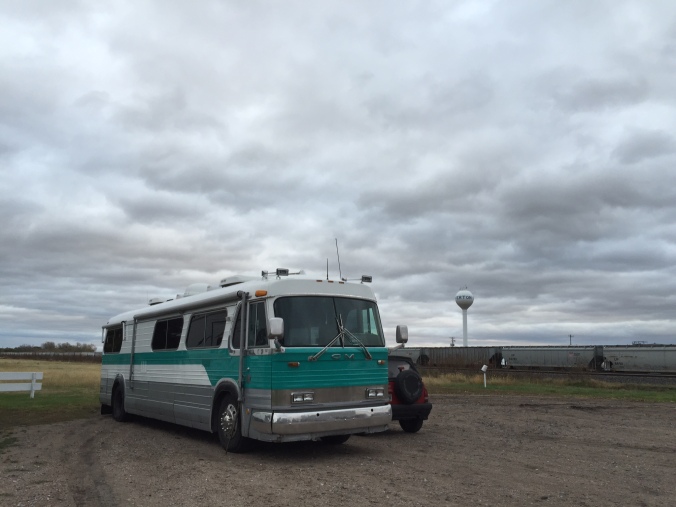 Our free drycamping spot for the night. You can see the railroad cars in the background.

The next morning, assisted by a shot of starter fluid, The Big Kahuna gave us no trouble starting and we headed 200 miles west to Interstate Power Systems on the outskirts of Omaha.  We were relieved to see the big Detroit Diesel and Allison emblems displayed prominently on their large building.  It had taken us too long to get there to expect that they would take us in and start work: it was less than an hour before they closed for the day, but two of their mechanics came out and took a quick look-see.  They are not sure about the Flatwater’s “air leak into the fuel lines” theory, particularly their guess as to which lines might be leaking.  While they have not ruled it out, they are thinking it might be the fuel lines inside the valve covers are leaking. 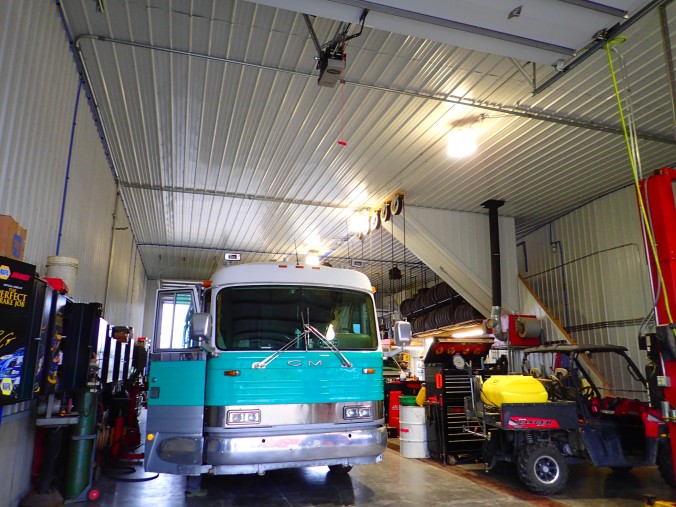 Poor Kahuna. Will you never be reliable?

Either way, we will be in bright and early on Monday to have them troubleshoot this issue, and we will provide our ongoing “punch list” of other less urgent issues to see if they want to take a crack at them with the couple of days we are willing to stay in Omaha.