Make no mistake, Cape Disappointment State Park on the Longbeach Peninsula is one of the more popular camping and RV destinations in Washington State.  It is frequently full on good weather weekends during the summer months, and we were fortunate enough to stay there for free in a full hook up site due to our volunteering at the North Head Lighthouse. 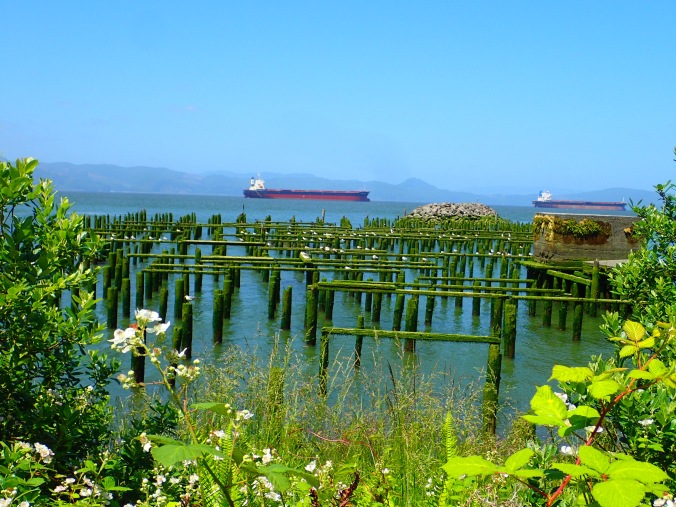 Columbia River on the way to Cape D State Park

The campground is diverse, with 220 total camping sites, the majority of which (137) are dry camping, though 60 are full hook up, 18 are electric and water only, and 5 are hiker/biker tent only spots.  Unlike many private campgrounds, this state park spreads the sites out quite well.  All of the camps have lots of space and plenty of greenery between them and the neighbors.  Aside from the sites along a row in the front entrance area, most are organized into circles of 10 sites with trails and unofficial pathways leading between the circles or directly down to the expansive beach.  The dry camping areas have a bathhouse close to each circle, though the hot water in the showers was coin operated.

The state park grounds encompass nearly 1900 acres of coastal forest and steep hills with numerous rock formations encountered sporadically throughout.  Much of the designated campground sites are in areas formerly underwater until the Columbia River jetties were constructed in the late 19th century, which lead to significant land accretion along the coastal areas on either side of the river delta.  The park boasts several excellent hiking trails, including one that runs along the route best understood to be that Lewis and Clark followed to their first sighting of the Pacific Ocean. 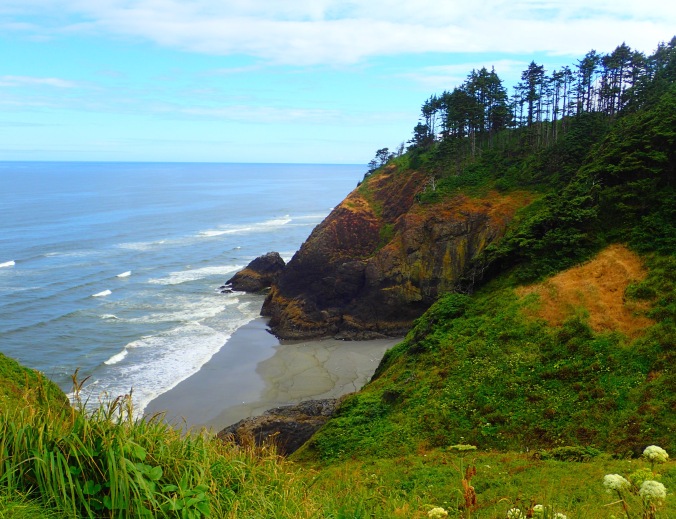 Cliffs to the beach from the North Head Lighthouse escarpment

The park also has a couple of great spots of historical interest, including the Lewis and Clark interpretive center, the North Head and Cape Disappointment lighthouses, and elements of the Washington States Confluence Project, a series or artistic architectural projects along the Colombia River designed by Maya Lin, a sculpture and landscape artist best known for designing the Vietnam Memorial.  The park also hosts a summer concert series in their outdoor amphitheater.  We were fortunate enough to be there during a traditional Hawaiian music and dance concert conducted by a local Hawaiian transplanted family running a dance and music school in the vicinity. 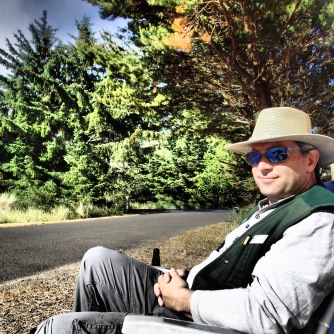 I have a green vest. And a name tag. Respect.

Now I have a grey vest. I am off duty, and contemplating vast things.

I have contrasted two Oregon state parks, Cape Blanco and Nehalem Bay, the former being more rugged in its transition between the land and sea, with relatively steep forest runs from the campgrounds down to the ocean, whereas Nehalem was flatter with large dunes facing the campsites.  Cape Disappointment is about halfway between those two, with relatively flat walking trails from the campgrounds to the ocean due to the aforementioned land accretion, but all of that surrounded with steep hills and rocky cliffs outlining the pre-jetty coast line.  This made for an excellent camping venue, with easy access to the extraordinarily wide beach combined with fantastic cliff views from the hiking trails and lighthouse.  The beach itself was another example of those fantastic Pacific Northwest areas, with giant piles of driftwood lying in desolation along large expanses of mixed traditional whitish and black basalt sand.

The beach looking north towards the lighthouse cliffs

With nearly 1900 acres of sparsely occupied land, the wildlife was abundant.  We saw deer every other day during our drives to or from the lighthouse or our bike rides, bald eagles soaring past the lighthouse, and raccoons so bold that they looked down on our campsite from the large rock structure in front of our bus even in broad daylight.  The north section of the beach just before the lighthouse cliff includes several tide pools, Rosemarie found a fantastic large purple starfish on our first excursion there.

Our weather was fantastic for much of the two week stay, with crystal clear visibility and blue skies. But we also experienced a touch of the typical Pacific Northwest weather with a couple of days of drizzle and fog, which completely changes the appearance and feel of the beach and park grounds. 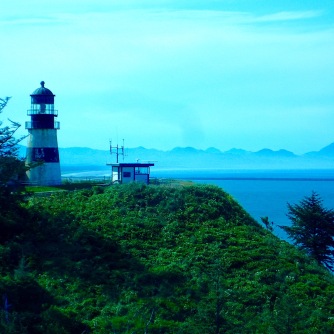 The other lighthouse, Cape Disappointment 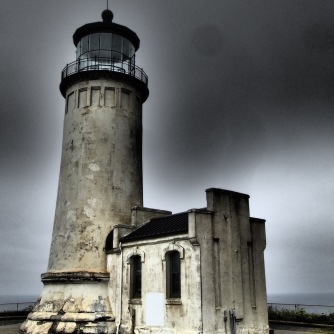 If there is one negative to the park it is the lack of cell phone reception.  As mentioned in our last post, we had to bike a mile to make a phone call and two to get internet.  This can, of course, be a positive, and we treated it as such, allowing ourselves to enjoy a temporary separation from endless texting, facebook, and internet surfing.  This was a place to enjoy day hikes, beach walks, campfires, and the general beauty of the surroundings.  I am pretty sure we will be back.