Today was our fourth full day at Coach Maintenance Company in Williams, CA.  Days one and two had us in wait mode: Mechanic Ted’s primary project took far longer than he anticipated, but true to his word as soon as it was done he turned full attention to The Big Kahuna.  During those first two days we tried not to waste time worrying about the delay and instead get a few things done. Rosie set up a table outside and worked on some hand made jewelry projects.  We cleaned and reorganized parts of the bus.  I found some rubbing and polishing compound in my Big Box of Bus Liquids and Pastes (B3LaP), and rediscovered the magic that a light rubbing compound can work on damaged paint.  Check this before and after of one of our storage doors, scraped up by a big rock: 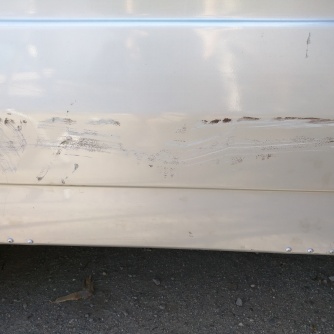 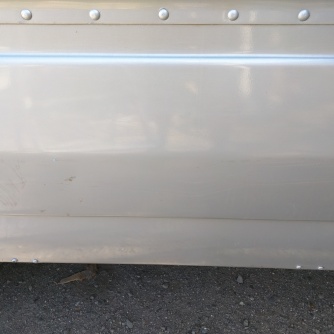 When you scrape your vehicle against something, often what you mistake for damaged paint is just a layer of the object you hit stuck to the surface of your generally undamaged paint. Rubbing compound removes all that, in addition to sanding actual light scratches from the top coat. Sometimes the results are extraordinary.  Another door, another example: 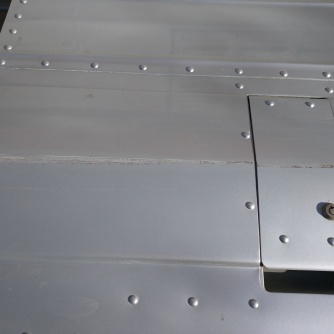 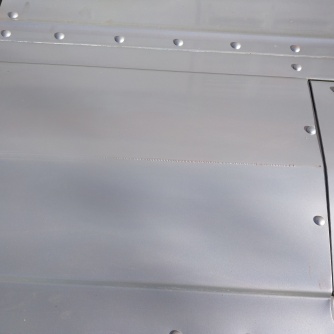 So we kept ourselves productive until Ted could get to us on day three in the yard, starting first off with the intermittent battery charger issue, which of course is not currently showing any symptoms. Having consulted the drawings, Ted was able to narrow things down, largely because we had already determined that one of my dashboard mystery lights is in fact a perfectly working generator failure indicator.  The fact that this indicator works at all eliminates some suspect components.  In light of that, Ted had me pull two relays: the starter/generator relay and the sensor relay, and cleaned the contact points in his glass bead power cleaner and adjusted the points alignment.  That is about as much as we can do until the other bus projects are done and we can start it up and see if we get any symptoms.

After that he hooked up an oil pressure gauge directly of the engine to see if what the dash gauge was indicating, catastrophically, dangerously low pressure, was accurate.  It is not.  Oil pressure is exactly what it should be through the full range of engine RPM.  What I have is merely a bad “sender.”  Since it is an aftermarket truck part rather than an original bus part, Ted doesn’t carry them, but has given me guidance on how to get the proper Stewart Warner sender to match my dash gauge.

Next we tackled the bent storage door frame preventing proper closure of two doors behind the right rear wheels.  This is going to get a bit technical, try to keep up.  The frame in question was bent towards the rear of the bus, it needed to be pulled forward half an inch.  So we hooked a big heavy chain to the bent frame, rested the free end of the chain up under the back tire… and then backed up the bus.  The tire ran back over the chain, holding it in place, and the power of the bus trying to continue backwards essentially pulled the frame into position.  So very high tech, but now the doors close. 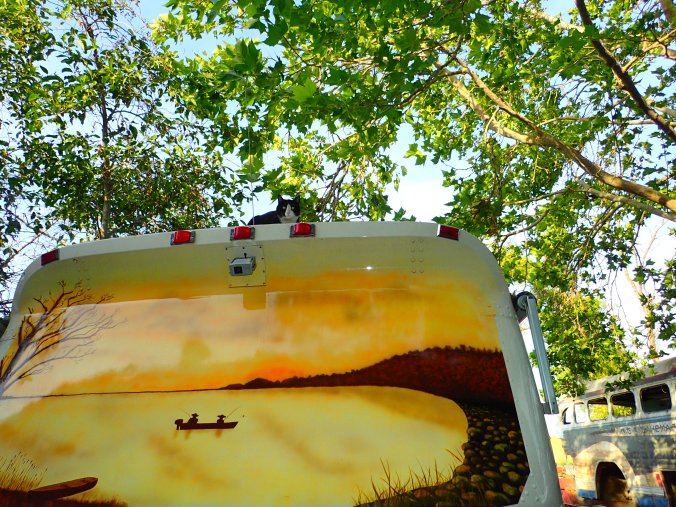 “Spaz” supervises from atop the bus

Last we started on the secret mystery project.  Anyone care to guess before we give hints?  Too late, here are some photographic hints. 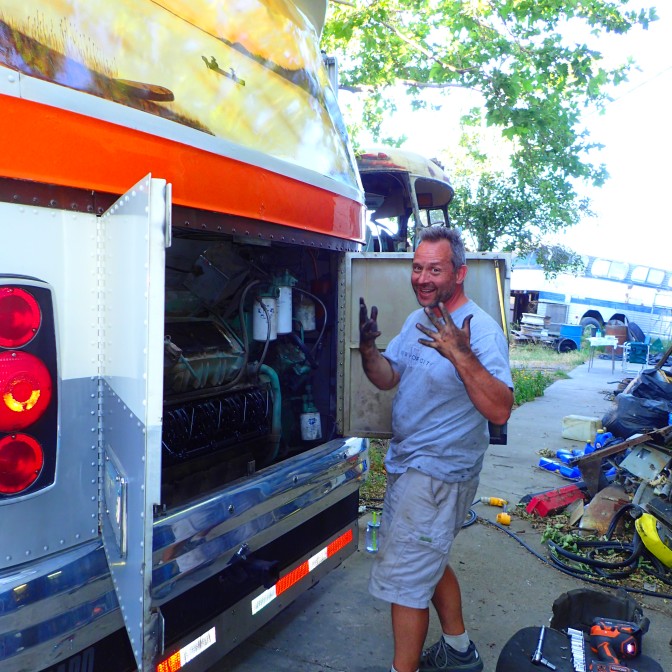 I’m a doctor, Jim, not a bus mechanic! Oh wait, I’m not a doctor either. 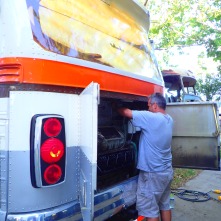 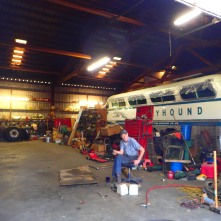 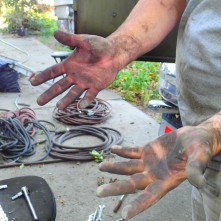 The dirt, I do not care for it.

In addition to the photos, I will tell you that the secret project also presented the perfect opportunity to do a tune up: adjusting the rocker spacing and fuel injector heights, which Ted did. 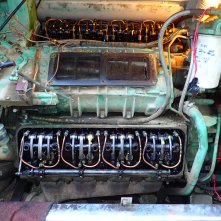 Modified fuel crossovers already installed. We should be able to make the Kessel Run in 12 parsecs. 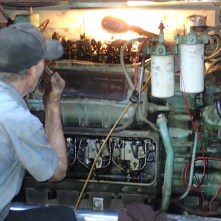 Ted flipping the bird to the upper cam assembly, as best I can tell.

My prefered method of “assisting” with the repairs. Ted wrenches, I drink beer.

Finally, here are some belated pics of the damaged reverse gear assembly that Ted replaced while we were in Hawaii. Half a dozen completely missing teeth and every single remaining one heavily damaged. 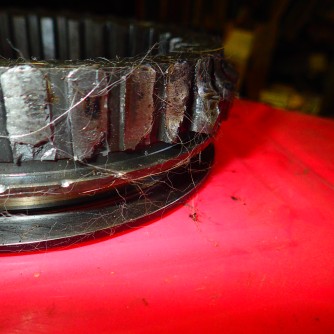 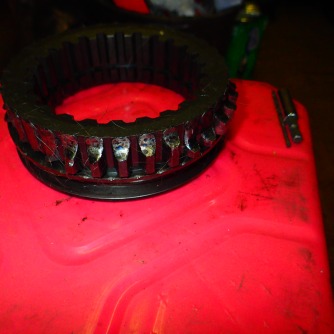