Perhaps foolishly, given the two lingering mechanical issues we are dealing with (a likely bad alternator and a power steering leak), we thought we could nurse the bus onward for a few more days and swing through Joshua Tree National Park before turning towards the coast or north and a mechanic.  Our research suggested that as long as you arrive on a weekday other than Friday, you can find a site in one of the half dozen campgrounds within the park.  We even called the park an hour before arriving to confirm, and they told us that the most appropriate campground for our rig and arrival point, Jumbo Rocks, had eight spots left.  We hurried in, the ranger at the gate basically told us good luck but don’t get your hopes up.  We plugged along anyway, driving the 17 miles into the park to Jumbo Rocks only to find… total chaos. 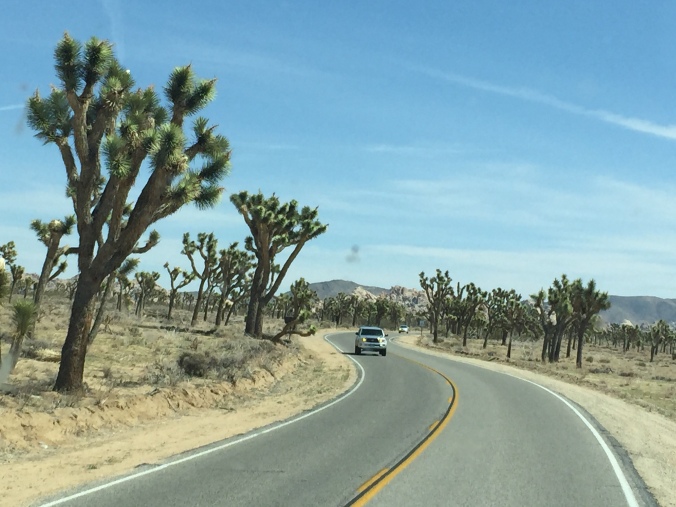 Most of our Joshua Tree National Park pictures are from the bus windows, since driving is about the only thing we did there

I can’t speak to the management of the park as a whole, but this campground is the single worst managed site of any national, state, or county park or recreation area we have visited, and it’s not even a close call.  Let me correct that statement a bit; to say that it is poorly managed implies that it is managed at all.  Rather, it seems that somewhere along the way the park manager just through up his hands and said “let the people work it out, whats the worst that could happen?”  Despite being full, and unlike every other national or even state or county park we have visited, there was no volunteer camp host, thus there was no one, absolutely no one, who actually knew if there were any available spots and where they might be.  You basically had to drive through every side loop, some of them quite narrow and winding, and examine every post marker to see if it had an updated orange claim receipt on it.  Eventually I parked beside the road while Rosemarie explored on foot amidst the scores of families and children and at least half a dozen other campers coming in every few minutes also looking for a spot.

Very large, even jumbo rocks near the campground of the same name.

While Rose walked, I maneuvered the bus out of the road I was blocking, and in the process somehow lost reverse gear.  Unlike the previous and now repaired reverse gear problem, which was simply a shaky solenoid operated air relay assembly failing to tell the transmission to go into reverse, this issue appears to involve the tranny itself.  My light indicators show that it goes into reverse, the bus will even back up a foot or three before a horrid grinding brings it to a halt, and further back it will not go.  Deeply frustrated, we continued out of the this campground and continued along our path towards the southern end of the park and our last hope for a campground spot near the Cottonwood entrance.  Unfortunately the warning sign for the campground turn off road was within feet of the turn itself, and we missed it.  With the bus unwilling to back up the distance necessary to make the curve, we continued forward several miles trying to find a turnabout large enough for to make a 180 degree turn without reverse gear.  While we rumbled south, four more large motorhomes passed us going north, and we assessed our odds of getting a spot were approaching nil.  So out of Joshua Tree we drove, turning west on I-10 towards the unknown.

This may have been our lowest point since fulltiming.  Even the full on break down in Big Bend resulting in a 200 mile tow, 11 days in a hotel, and a major repair bill did not phase us as much as our current state of disrepair.  Partly from having it occur so soon after we had dealt with that mechanical work, and partly from it coming on top of the two other continuing problems, this is the closest we have come to wondering if we are doing the right thing.  We were numb enough that we didn’t properly stop, take stock, and develop a revised plan.

Tired of views from our front windshield? Then we shall vary things with a side window shot.

All we could come up with was to head straight for San Francisco, where we have both friends and family, and thus some options, and use the intervening time to get some referrals for a mechanic.  We didn’t really plan a route or stopping points, we just drove west to intersect the northern routes.  Near sunset we pulled over in a random town and researched our nearest park options, and thus suffered the consequences of RVing on the fly: we had driven straight into the heart of wealth, in-between Coachella and Palm Springs, and the campground prices reflected this.  We are lucky that we did not happen to pull into this town one week later, when the actual Coachella Valley Music & Arts Festival would be in full swing.  We pulled into one park that, per our rapid internet research, seemed reasonably priced, only to discover an incredibly rutty dirt road, a large hump that bottomed us out at the entrance, and a park that looked like it might double as a dog-fighting arena.  Facing reality, we humbly called the overpriced resort nearby and reserved their last pull through site, necessary since we could no longer back into a spot. 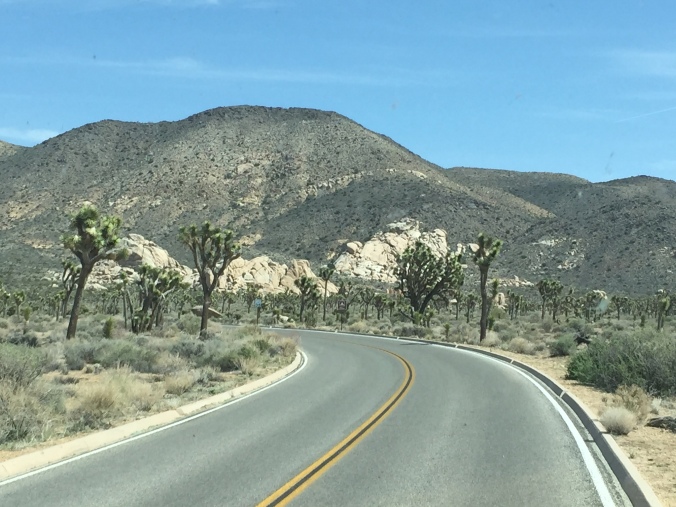 and back to the front window

Thus we found ourselves at Shadow Hills RV Resort, a lovely place, but the most expensive one we had every paid for.  We used that one night to recharge ourselves and the bus, and to make somewhat more detailed and careful plans for the rest of our journey north.

8 thoughts on “Attempting Joshua Tree, total campground anarchy, and yet another mechanical problem”