We left Saddle West Casino and RV Park refreshed and ready for Death Valley, making only one wrong turn on the way. Unfortunately that wrong turn cost us nearly an hour, but it was not an unpleasant drive across the NV-CA desert-country border.  We slid down into the valley in early afternoon and pulled into the visitor center to watch the usual, high quality movie in the theater and get advice on the various available RV camping options.  We selected Sunset Campground near Furnace Creek because it had the very important feature of having availability, plus it was close by and had the most generous generator hours.  I know that doesn’t sound like a big deal, but when you are beholden to electricity magically created from your Honda box, then you pay attention to the holy writ of generator hours: the longer you can run, the better your fridge and freezer keep things cold.

Sunset campground was little more than a large gravel parking lot.  It had basic bathroom facilities and deep sinks for washing dishes, but no electrical, water, sewage, or shower facilities. Being less than 10% full, it provided plenty of space, but we can’t really compare it to the other nearby campsites in Furnacce Creek or Texas Springs.

We weren’t there for the facilities,, we were there for the surprising and at times shocking diversity of vistas and life.  In this we were not disappointed.  From the winding, miles long entry road to each scenic overlook, Death Valley defies expectations and encourages a wonder even in the jaded cynic. We managed to see Zabriskie Point, offering a peek at the Golden Canyon on the first afternoon before setting up camp.  Yes, we hit a high temperature day, about 102 degrees, but the lack of humidity and the continuous breeze made it tolerable, and as the sun set the temps dropped rapidly towards comfort with a significant increase in winds. 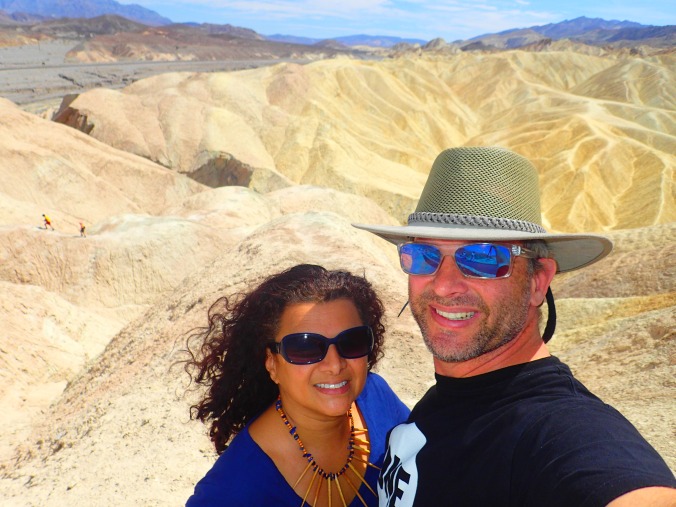 Us, golden canyon behind. We look awesome.  Canyon is alright too.

The next morning we broke camp and headed north, spotting a coyote rambling along near the camp as we drove out.  Strangely, he did not respond to my specialized coyote call.  We visited Salt Creek, a high salinity area home to the endangered pup fish, a minnow sized little thing that is very active in the shallow creeks, and we were fortunate enough to observe them during mating season. Mating, it turns out. Boom chicka wah wah.

Lone coyote, pondering his next Acme purchase. Rocket skate? Giant slingshot? Yes… all of those.

We moved on to the Mesquite Sand Dunes, a giant expanse of, you guessed it, huge sand dunes, then parked at Stovepipe Wells, another dry camping spot in a wide open gravel lot.  The plan was to claim a site, then head out to visit several more spots within the park.  Unfortunately, Kahuna disagreed with the plan and refused to restart after lunch.  After some, and again pardon the tech-speak here, “jiggering around” with the parts and pieces, I deduced that the batteries were, mysteriously, dead.  I hooked up the battery charger for an hour and voila, it started.  A bit spooked, we took stock and elected to break camp fully and just visit a bunch of the key sites and decide on our plans for the night as the afternoon progressed.

Salt creek, pup fish habitat. They are doing it. Nonstop. We watched.

We drove nearly an hour down to Badwater Basin, the lowest elevation dry point on the continent, 282 feet below sea level, complete with salt flats from evaporated saline water.  It was interesting, but neither of us could escape the cold feeling that Kahuna was still unimpressed, and sure enough when we made to leave, he wouldn’t start again.  With growing worry, we charged for another hour, started him up, and decided we had had enough of Death Valley; it was time to head back towards civilization, or at least cell phone access and a greater density of diesel mechanics.  Besides, after a couple of weeks in New Mexico, Arizona, and now the driest parts of California, we were more than a bit tired of the desert, the heat, and the dust.

A valley. Apparently of Death.

We left Death Valley with mixed feelings: tired of the desert heat and dust, but realizing that we had not given it a chance, had not really had the opportunity to see some of the more extraordinary sites, like Mosaic or Artist Canyon, or Darwin Falls. Maybe next year.

2 thoughts on “Into the valley road the ’63… Death Valley”