We left the GC two days ago, managing to roust ourselves in time to (barely) beat the 11 AM checkout. We swung by the Grand Canyon Village post office to pick up our mail, forwarded from our account at MyRVMail.com.  We drove an hour south to Williams where we impulsively stopped at Bearizona, one of those drive through zoo/animal encounters, this one heavy on bears, wolves, and big horn sheep, plus a walking area with otters, foxes, beavers, porcupines, new born bear cubs and other assorted southwestern animal life.  The great thing was that they were fully capable of taking our 35 foot motorhome through the park, and since the price was per person, it didn’t cost anymore than a car: $20 a head (minus $2 military discount,) so $36 plus tax got us in for the day.  Truth be told we enjoyed this more than the equivalently priced Meteor Crater.

Exiting the zoo we headed east on I-40 towards Flagstaff.  As we were experiencing some potable water and sewage system issues, we swung into the Camping World in Bellemont about 10 miles west of the I-40/I-17 intersection.  We have benefited from our Good Sam membership, which has relationships with Camping World and the Pilot/Flying J gas stations, but the actual assistance that the Camping World staff provides can be hit or miss.  I am pleased to report that staff at this Camping World, especially Eddy, went the extra mile to understand our issues and find solutions.  He was not content merely to hear my no doubt overly lengthy descriptions of the potable water pressurization issues and the macerator (sewage chopping/blending device) clog, he came out to the bus and examined our fittings before proposing solutions.  And not expensive “looks like you need to replace all your dilithium crystals and repack the hydraulics with ball bearings and 40 weight” solution, but an easy $20 in parts and advice on how to proceed.

We made our purchase and continued on our way, fortunately turning south before the brush fire that had closed off I-40 east of Flagstaff.  The toughest part: 18 miles of 4-6% downhill grades on I-17, but after the Sedona 89A fiasco, we had researched this route and were more prepared for the brake heating issues. Besides, I-17 is much wider and gentler on the turns, so this stretch entailed little drama. We pulled in to Phoenix an hour before sunset to visit a New York friend of Rosie’s, who helped us arrange our “stealth” camping spot for the night: parked in a nice golf course front neighborhood in front of another friend’s house.  We are truly out of the mountains and back in the southern region as even the night temperature stayed quite temperate.  The next morning we headed out towards Tucson and the Saguaro National Park.

Saguaro does not have any RV camping within the park, and we contemplated a boondocking site on BLM land south of Tucson that came recommended from some of the more experienced full time RVers, but our research suggested that the Gilbert Ray Campground, located within Tucson Mountain County Park and just a few miles from Saguaro National Park, would be ideal.  At $20 a night for 30 amp electrical hook up in a spacious site with a picnic table and nearby clean bathroom, we were sold. Sure, it doesn’t have water or sewer hook up, but it does have a fill and dump station for both of those, respectively.

And this is where the fun begins.  We pulled into the campground in the early afternoon, checked in at the front office and headed towards the dump station.  We have a macerator, a device that chews up and shreds all material from our sinks, showers, and toilets, but it had become clogged.  Most RVs do not have macerators and instead of our 1.5″ outlet hose they have a great big 4″ flexible hose that they just connect to the sewage dump station and let her rip.  Their advantage is simplicity.  Our advantage is we usually don’t have to worry about using special, ultra thin, rapidly degradable toilet paper.   At least, that’s the theory.

The good thing is that even if the macerator clogs, I can use the alternative sewage connection with a traditional 4″ hose to dump the tank, except we didn’t have one of those hoses.  So I purchased a 5′ section with bayonet fittings, the cheapest and most compact section I could find, at the aforementioned Camping World.  My thinking was that I would only have to use it once, just to empty the tank in preparation for disconnecting and unclogging the macerator, and then we would go back to our traditional macerator method of dumping tanks.  We pulled alongside the dump station and set up the 4″ hose… which was one foot short of connecting from our outlet to the dump hole. 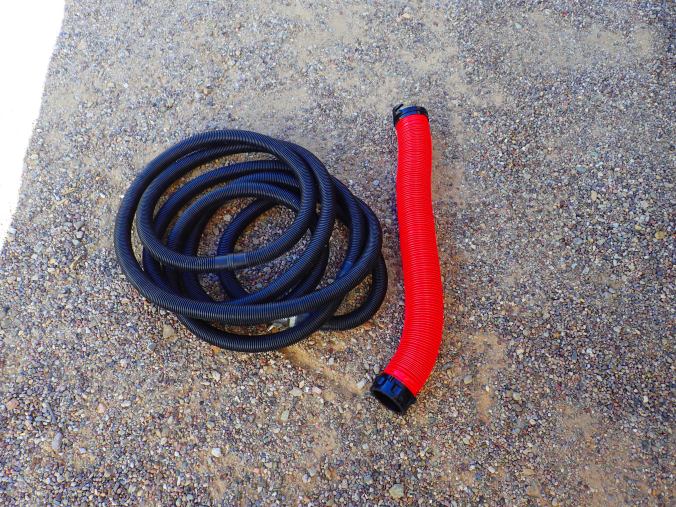 25′ long, 1.5″ diamater macerator hose on the left, 5′ long, 4″ diameter traditional sewage hose on the right. Hopefull the latter will never be needed again.

We spent a good 20 minutes backing and adjusting the bus position to get the hose close enough to at least spill into the hole if not connect completely.  We finally got it done; I held the hose in place while Rose pulled the knife valve open, and whoosh, with little drama we emptied the tank in seconds.  Or so we thought.  We washed up and continued on to the fill station, but something nagged at me: it had been too easy and too fast.  As I was filling the potable water tank it hit me, I had not opened the primary isolation valve, so all we had dumped was a couple of gallons that had leaked by the primary valve and was up against the secondary valve we had opened!  So back to the dump station we went. 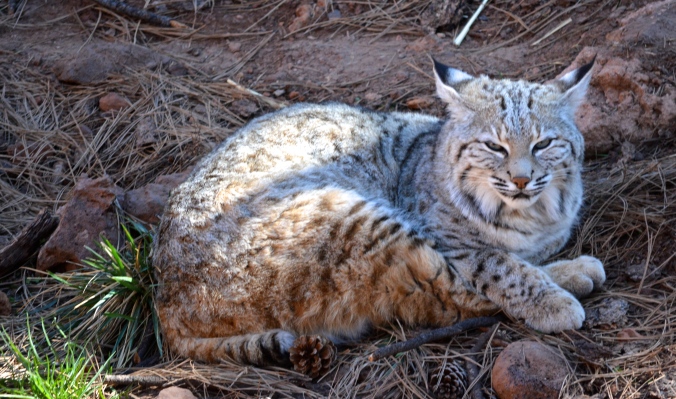 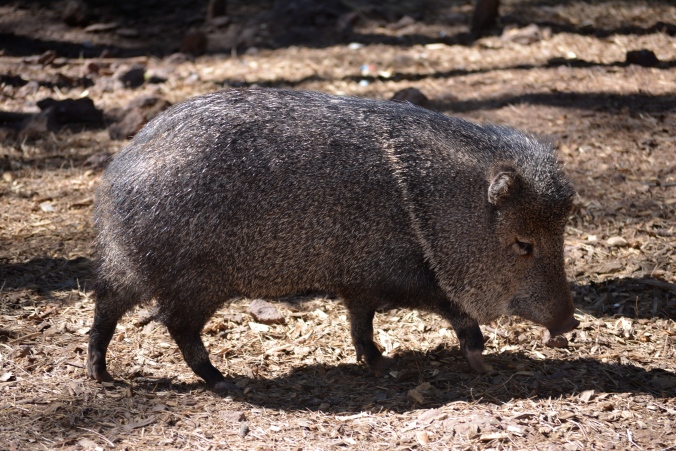 Javelina. Not a pig.

It took a bit less time to get ourselves aligned, but I still could not get any closer than five feet, which meant we still had to physically hold the 4″ hose over the dump hole.  This time, when Rose opened both valves, a deluge of sewage showered forth, spraying mostly, but not entirely, into the hole. Fighting back a retch we soldiered on, emptying the tank, awkwardly holding the hose in place while avoiding the growing pool of nasty liquid around the drain hole.  After about 50 gallons dumped we finally closed the valves, used the nearby hose to clean the area and our equipment, washed up, decontaminated, and continued on to our spot.  But of course, the sewage fun was not done as all I had accomplished was to empty the tank; the macerator was still clogged.

So this morning I set to work on it.  Since I knew that the primary isolation valve was leaking, I started up the bus and used the air ride system to raise the front end and lower the back so as to create as much of a backward slant as possible, hoping to limit the amount of liquid sewage I would have to deal with while disconnecting the macerator.  That done I opened the bypass hole and caught only about half a gallon of nastiness in a bucket, better than I had expected.  I was then able to disconnect the macerator at both ends and get to work on pulling out the jammed material, which turned out to be a plastic baggy and part of a white latex glove.  Success, and now I hopefully will not have to stretch our 5′ hose and manually dump that way ever again.  Such are the occasional joys of RV life.