Since leaving Odessa we have pushed forward pretty hard: two days without water hook ups in Balmorhea sledding the sand dunes, one day drycamped in the Guadalupe Mountains to hike the Devil’s Hall trail, and a half day parked in the visitor center lot in Carlsbad for cavern hiking.  Simply put, we were tired and needed to stop for preferably three days of recharge, in every respect: we needed full hook ups to get our batteries, water tanks, and black water tank charged, topped off, and emptied, respectively.  We were way behind on laundry and needed to catch up on this blog as well, but on a more basic level, we just wanted to settle for a couple of days after a very fun but hectic schedule. 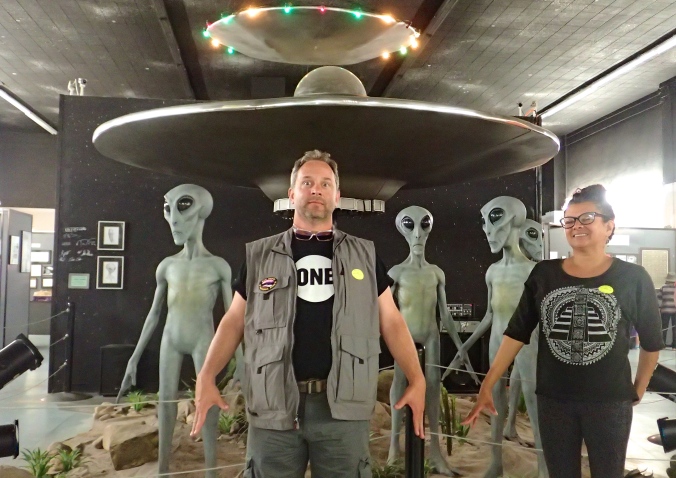 While we normally prefer nature to cities and towns, if it is a particularly interesting “people place” then we can certainly be lured in.  Since our next major destination was generally north-west, and the famous town of Roswell was only 90 miles or so north, it fit the bill perfectly.  We checked the RV reviews and our favorite bloggers for park recommendations.  If we possessed a tow vehicle we likely would have opted for one of the state parks on the outskirts of town, but lacking a tow we needed something close to the action within bicycle or walking distance.  We called our tentative top choice, learned they were completely full, then called Trailer Village RV Park and got one of their last available openings. 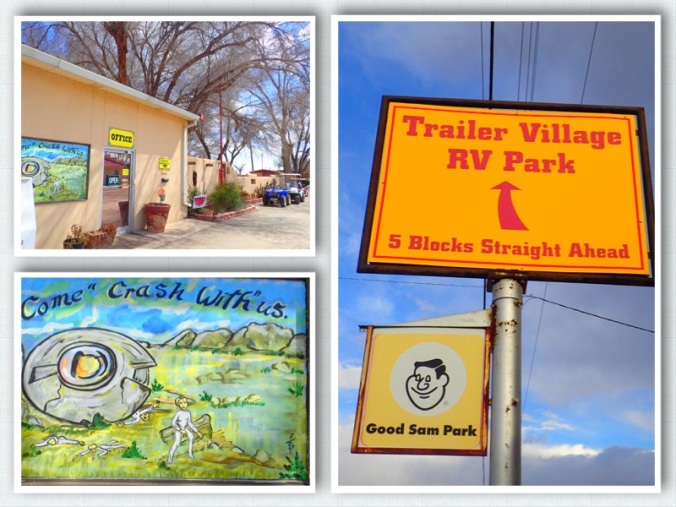 The park is clean, well maintained, nicely decorated and landscaped (allowing for the general browness of New mexico in winter) fully equipped for 50 amp service, has inclusively priced cable and WiFi (very good by RV park standards), with coin laundry rooms available.  The no-nonsense co-owner, Debbie, checked us in, gave us the run down on the park, secured our 10% military discount (also honored for Good Sam members, must pay cash to receive this discount) and got us situated in short order.  After discussions with several of the longer term park residents, we feel we lucked in to the right park.  One of the other options has theft and security issues, and our other top choice was described as an empty lot behind someone’s house, regardless of how good their customer service reviews are.  Besides, Trailer Village RV Park is the closest to downtown Roswell: 1.4 miles.  Bottom line: if heading to Roswell, don’t let the somewhat typical and uninspired name fool you, this is the best bet for a full hook up park in town.

Best of all, Trailer Village had three other rigs from RVillage.com present, our first ever encounter with people for that group after several near misses in Florida.  RVillage is sort of a Facebook for RVers, but without the drama and predatory data mining.  You register, check in to campgrounds, see who else is present, send them a message to plan a get together, etc.  Best of all, when headed for a destination you can see who is already there and ask questions in advance.  Thus we met Janet and Randy, Janice and John, and Mike.  We got together for drinks and fantastic appetizers (thanks Mike, that coconut-pineapple-habanero jam was indescribable) which, under the influence of four bottles of wine, morphed into a full meal when Randy pulled out what I can only describe as the least healthy yet utterly delicious thing we have had in months: a pork loin inside a hollowed out baguette, with the whole thing wrapped in bacon.  He cooked it on his Green Egg, and in tandem with my step dad’s strong recommendation, has us pretty much convinced that we need to get one of the smaller versions of this remarkable device.

The Roswell contingent at an unofficial RVillage.com rally

There was also this nearby town with a UFO fetish.  We spend most of our second day in the heart of UFO mania.  Pretty much every small business and even many of the chains push the alien thing hard in their street front advertising.  It makes for an entertaining photo opportunity from nearly every corner. We got so wrapped up in it that we nearly missed our opportunity to visit the International UFO Museum.  Because we arrived only half an hour before closing they let us in for half price ($2.50 vice $5 each).  Yes, I’m deeply skeptical, but it was a fun and interesting to tour.  My only criticism is that they need to update the displays; some of them appear to have stagnated in 1975 or so.

The aliens are EVERYWHERE in downtown Roswell

Three days is sort of the sweet spot for us in terms of length of stay at parks, though as many longer term full time RVers mention, everyone tends to slow down their pace as time goes on and you get beyond the “OMG I must see everything right now” early phase.   Next year a week my be the prefered stop length.  But after three days in Roswell we were eager to get back on the road towards the Petrified Forest, Sedona, and Grand Canyon.

I had grand plans: Wake up at 6 AM (an ungodly hour for any self-respecting retiree) and head out of Guadalupe Mountains National Park, turn south for two miles to hit the scenic overlooks of El Capitan, find three or four geocaches along the way, and then turn back north to meet our 8 AM appointment at the Carlsbad RV Repair Center to address a couple of water leaks.  Rosie did not object as she planned to stay in bed during the entire scheme of manuever.  What I failed to take into account was the sunrise time; at 6 AM it was still pitch black, and I don’t like to drive The Big Kahuna in the dark, much less try to geocache by flashlight or sight see without, er, sight.

So I reset the alarm for 6:40, which turned out to be perfect for a dawn start with sufficient light to both see El Capitan and find at least one geocache before we headed towards Carlsbad.  We arrived at the repair center precisely at 8, they immediately lead us into a bay, Rosie and I walked down the road to a diner for breakfast, and by the time we returned they were already buttoning things back up after repairing the two fitting cracks we knew of plus a cracked toilet valve that we did not.  We have had experience with six different repair organizations since buying the bus, and this was in the top two for fast, fair, and painless service.

Shortly after 10 we were back on the road for the short trip back to the Carlsbad Caverns National Park.  The seven mile entry road is a twisty winding pleasure for the passenger and not too difficult of an experience for the driver.  The visitor center has ample bus and RV parking, though part of the lanes are not particularly level and unless you have an excessive amount of faith in your parking brake, wheel chocks are recommended to prevent catastrophe.  I used two big rocks.

We checked into the visitor center and learned that as it is Spring Break season all of the guided tours are filled up days in advance, but we preferred a self guided tour in any case, particularly since they had a portable audio guide to rent for $5.  We used our National Park Annual Pass for free entry to the cavern itself, which if anyone is keeping track has now covered $50 of it’s $80 cost ($20 at Big Bend, $10 at Guadalupe Mountains, and $20 at Carlsbad).  We were a bit concerned about the number of people in the park, particularly the busses full of children, but the park does a great job of spreading everyone out, and since we did the longer tour starting at the natural entrance, we did not find the crowd disconcerting at all.

We did the slightly more than a mile hike from the cave entrance down to the primary viewing areas, another 1.2 mile circuit of the “Big Room,” and then took the elevator 750 feet back to the surface.  It is difficult to explain just how overwhelmingly enormous this cavern is.  We visited Florida Caverns State Park earlier this year, and it was nice.  It was interesting and fun.  But to compare that cavern to Carlsbad is to compare a children’s flag football game to the Super Bowl.  Sure, you might enjoy them both, but let’s be serious about which one is the national wonder and which one is merely interesting.

The tour was longer and more energy consuming than we had anticipated, and thus we were ravenous enough to pay the extortionist prices at the visitor center cafeteria once we emerged topside.  The gift shop and separate library gift shop were pretty big compared to our previous national park shops, and we snagged my park patch and some post cards.

One of the key lessons from Carlsbad is that not all national parks are equal in terms of appropriate time to spend in them.  We had sort of gotten used to the idea that in very general terms, state parks are small, i.e., you can often see the high points by bicycle in one or two days, and national parks are huge, i.e., you can’t expect to see but a fraction of their wonders in less than three days and that with a vehicle. So we had roughly penned in three days for any national park we planned to visit.  This just isn’t necessary for Carlsbad.  Unless you want to do the cavern tour multiple times or can arrange a tour of some of the other caverns in the area, you can do Carlsbad’s main attraction in half a day, particularly since this is one of the national parks that does not have any overnight RV camping available within the park itself.  Once all of this became apparent we cancelled our plans to stay at the nearest private RV park and left right after our post hike meal, heading up the road to Roswell.  Since that visit we have taken a harder look at a few other planned stops, such that the soon to be visited Petrified Forest National Park, which will now be a one night stop vice three. 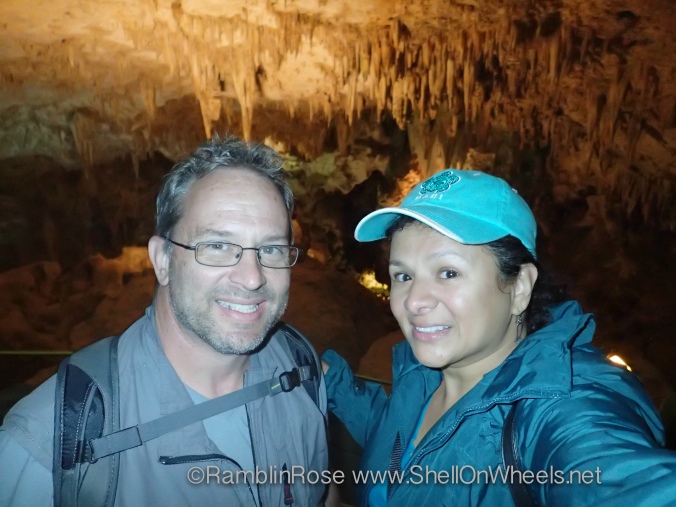