Sometimes you should just stop where it looks right:  After leaving Iron Horse RV in San Antonio last week we headed west, intending to stop for two nights at Seminole Canyon State Park near Comstock, TX.  Seminole Canyon was not something particularly on our wish list, it was merely a convenient half way point between San Antonio and Big Bend National Park, and along with Kickapoo Caverns and Devils River, was one of three parks in the general vicinity we considered.  We didn’t even have reservations.  As we drove over the trestle bridge crossing the Amistad reservoir, we looked down and noted a small group of RVs camped on a ridge overlooking the lake, and thought to ourselves, “ourselves, that looks truly beautiful, with plenty of space between each rig, fantastic views for all, and we should check it out.” So we pulled over, consulted the google, received too much information to sort while idling beside the highway, turned around and followed the circuitous and non-intuitive route Rose found back to the camp site.

The bridge we crossed from which we spotted the campsite.

Amistad National Recreation Area: The signs informed us we were in the Governor’s Landing RV site within the Amistad National Recreation Area.  We pulled in and consulted the first human we spotted, who turned out to be Miguel, the volunteer camp host, who informed us it was no hook-up dry camping for $8 a night, though pit toilets and potable water were available within the camp and a dump station a couple of miles down the road. Perfect!  Since we had just spent two nights hooked up at Iron Horse, we had plenty of fresh water, fully charged batteries, and empty sewage tanks, so a night or two here would be no problem.  The entire camp has only 15 RV sites, with maybe half suitable for something as long as The Big Kahuna, and nearly half of those already taken.  We selected the most level of those with a north-west facing view of the lake, I dropped Rose off to maintain our claim on the site while I went back to town for generator gasoline and critical supplies (beer).

Another view of the reservoir, from a different RV area with Amistad.

Setting up camp is a lot faster when you don’t have to worry about any hook-ups, so within a few minutes we were already enjoying the rugged views of the former quarry. We took a stroll down to the lake, had a fine outdoor grilled meal, and generally fell in love with the place.  So much so that our planned one night stay turned into three.  We occupied our days with short and easy hikes around the area and a couple of short dips in the rather cold lake.

Yes, it’s winter, and the water is cold.

We left after three nights, stopped up the road for the always agonizing full fill up of our diesel tank and to dump our sewage tank at one of the other RV areas within the Amistad National  Rec Area.   All in all we highly recommend this area for a short stay.  The price is right, the environment and facilities decent, and if you are looking for an easy stop off Highway 90, you can’t beat it.

Big Bend National Park:  We pulled into the Rio Grande RV Village 47 miles deep into the Big Bend National Park.  Our rig is not suitable to get to the other RV camping areas within the park, one of them requiring very sharp switch back turns or simply having too small of sites for us.  The Rio Grande site offered two options: dry camping for $14, or full hook-up sites for $35.  Since we had spent three days dry camping, we elected the full hook-up option, which in hindsight was a bit of a mistake.  Whereas the dry camping area was a beautiful set of loops with trees and plenty of space, the full hook-up area was a parking lot with each rig right next to one another. 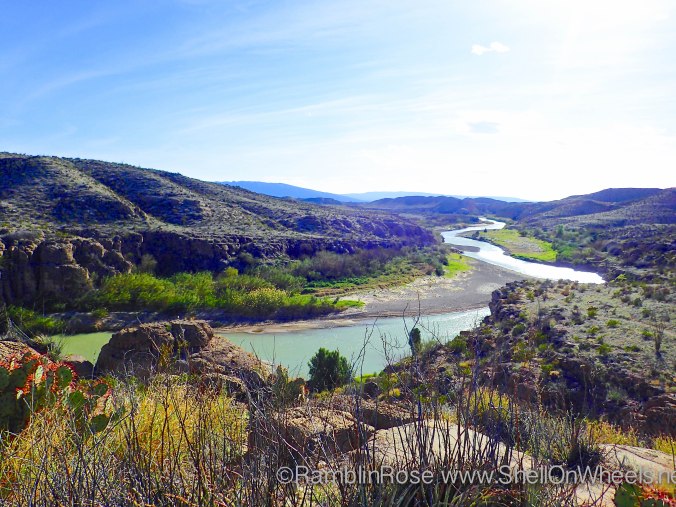 View of the Rio Grande from our hiking trail

Nearing the final leg of the hike to the hot springs

The park itself, however, was amazingly beautiful, and offered a variety of options to entertain us.  Given the time we had to stay, we passed on the short hike to the Mexican border crossing area, which would have offered us the choice of wading across the shallow area of the Rio Grande or taking the $5 ferry, followed by a short hike or $5 burro ride into the nearby small town.  Instead we took a seven mile loop from our rig to a hot spring sitting at the edge of the river.  It is difficult to describe how fantastic the views are, and I am not sure our pictures can do it justice.

At the hot springs on the edge of the Rio Grande 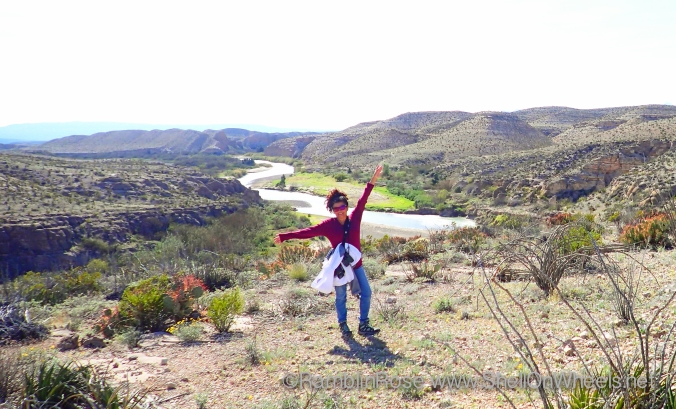 Rose at the top of a ridge overlook

While hiking the various trails near the border you will stumble upon various little caches of trinkets, apparently made by Mexican artists who cross the border at night to put their wares along the trial, along with an honor system collection jar, which they collect after sunset.

Cool copper wire insects for sale along the trails

We stayed two nights, dumped tanks, and headed out to Balmorhea State Park where we had reservations.   Of course, if you read the last entry on our breakdown, you know we didn’t make it, and ended up spending a third night in Big Bend, only this one beside the road at the edge of the park.  At least it was free.

We didn’t find out what this rodent was, it looked like a hamster with a tail, but it was obviously used to humans at the hot springs